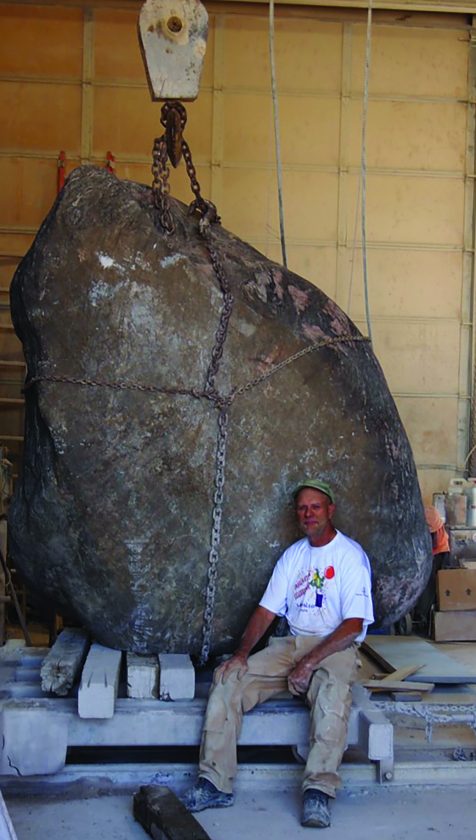 CONTRIBUTED PHOTO Pictured is stone sculptor Frank Swanson of Littleton, Colo. He was recently selected as finalist to display his work at the joint Marshalltown Police Department/Fire Department facility.

Swanson’s unique sculpture is “defined as a mutually beneficial relationship between different people or groups,” according to Arts and Cultural Alliance Director Amber Danielson of Marshalltown.

She has been involved in the selection process since March.

The public art committee, a program of the Alliance, led the selection committee, which worked in partnership with the police and fire departments to make the selection.

“The Marshalltown Police and Fire Departments work in a symbiotic partnership with the community to ensure the safety, security and well-being of the city,” Swanson wrote in his application. “This sculpture is designed to reflect the relationship between the three groups as they work together to make Marshalltown a thriving and flourishing community.

I want to create sculpture that will, in the future, stimulate questions that have not yet been asked, and this is what excites me about creating public art. ”

The sculpture will start as a single block of stone that is shaped into a triangle that represents the three-sided partnership. The stone will then be cut into three interlocking pieces.

“These three pieces fit together as one unit, representing the family of police, fire, community and their relationship with each other. Each piece shapes the other pieces as they work together to form the triangulated whole,” Swanson said.

The selection committee received 29 responses from artists across the nation to the request for qualifications.

That response led the committee to narrow down the submissions to three finalists who were tasked with developing site-specific concepts.

During the month of September, MPAC’s selection committee engaged with local residents to solicit input on the proposals.

“The community input helped guide the committee in the selection process,” Danielson said.

“This project received more than 408 individual comments for input on the three final proposals, which far exceeds the amount of feedback received on the two prior projects led by MPAC, ‘Echo’ on 13th Street and ‘Drills’ at the MHS Roundhouse.”

Selection Committee Member Alicia Hunter said, “We are happy about the selection of Frank Swanson. His concept Symbiosis is unique in its design and allows one to think and feel the meaning of the piece. His one of a kind processes of sculpting from a single block of stone brings something special to this project. We are excited to have this interactive piece displaying the partnership between police, fire and the community.”

The estimated installation of the sculpture is June 2020.