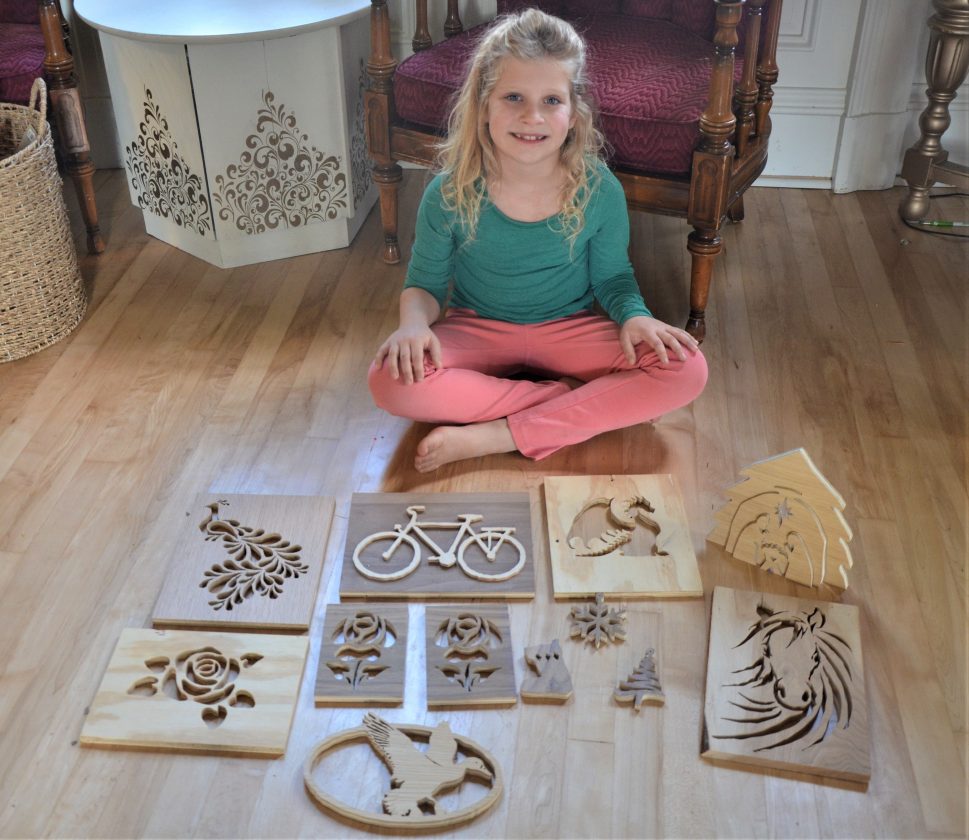 T-R PHOTO BY CHUCK FRIEND Eight-year-old Paisley Sy makes creative plaques and cutouts with a scroll saw in her family’s home. The local girl will have her crafts for sale in December at a craft sale to be held at Grace Church in Marshalltown.

Many adults couldn’t do what an 8-year-old Marshalltown girl has done.

In fact, many adults couldn’t even work with power tools successfully. But Paisley Sy not only works with power tools, but has created some beautiful crafts from her newfound hobby.

“I have been making projects since I was 6 years old,” Paisley said. “I like working with the scroll saw because it is fun and I do it most every day.”

Paisley’s parents said they are “Do It Yourselfers” and like to involve their children in things they do. They said Paisley began showing interest in learning to use the scroll saw, and was started on projects with simple lines and shapes. Her father said she was supervised at first, but today she often goes to the saw and works on a project an hour at a time by herself.

“I especially like to do puzzles and animal plaques, but have done Christmas ornaments, flowers and other objects such as a bike and a nativity puzzle,” Paisley said.

Scroll saw patterns are available online on the computer and Paisley has already picked out a few that she wants to do next. Once the pattern is printed out, a board is covered with tape and a spray adhesive is applied to the pattern. When the pattern is cut out and the project completed, the pattern is simply peeled off the board.

“Scroll sawing is fun – that is almost all I can say. But it can be hard depending on what it is that I am trying to make,” Paisley said. “Flowers can take 30 minutes to make and some plaques a lot longer.”

Paisley will have her creations for sale at the Home Craft Sale on Dec. 14 at Grace Church on South Sixth Street. After that she has plans to open an online store such as the ones on Etsy.