Marshalltown Mall up for auction 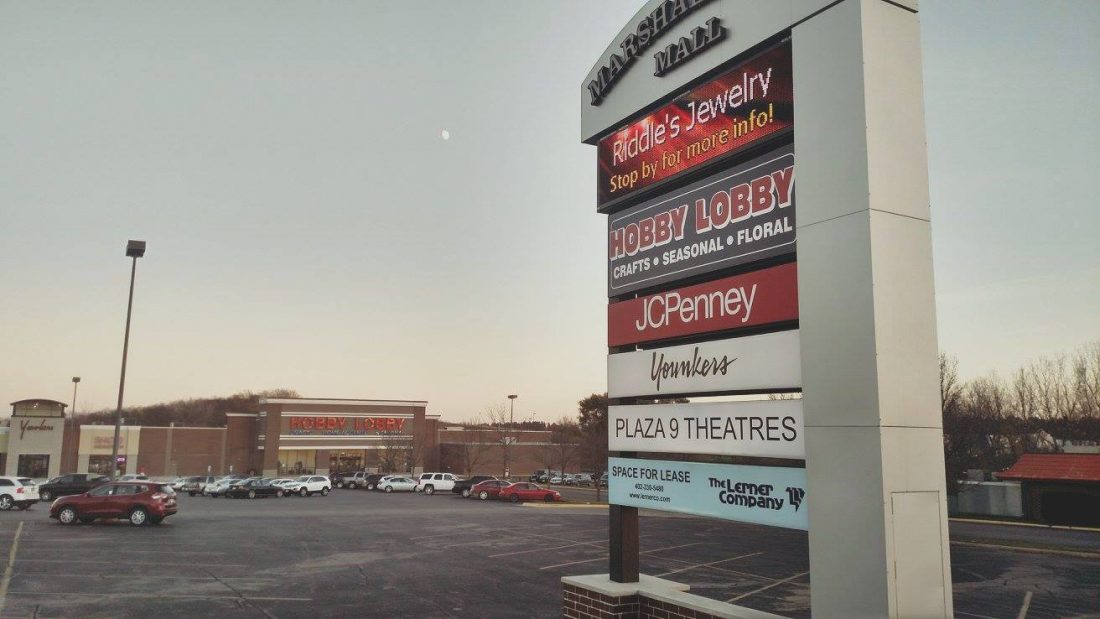 Contributed photo This file photo shows the electric advertising sign in front of the Marshalltown Mall.

The Marshalltown Mall will join the online auction block on Nov. 19.

Commercial real estate company Ten-X Commercial in California listed the property with a starting bid of $900,000. Ten-X sales executive Henry Buehrle said the auction will run for a full 48 hours. Whether or not the final bid is accepted by the owner depends on whether or not it meets the reserve price. Buehrle said the reserve price is not released. He also said there is a $10,000 auction participation deposit.

“The participation deposit is a safeguard,” Buehrle said. “If people do not have that in place, they cannot bid.”

Another safeguard on the auction is participants are capped as to how much they can bid depending on their declared assets.

“In traditional real estate there are quite a few situations where people are falling out of deals,” Buehrle said. “Buyers remorse is a thing and we are trying to eliminate that.”

After the auction ends and if the winning bid is accepted by the anonymous owner, the auction winner will have two hours to sign a purchase agreement which Ten-X will email. The auction was confirmed by Boh Kurylo, agent of the Lerner Company in Nebraska, the business which manages the mall. However, the owner of the mall is an anonymous New York City investment company.

A representative of the owner, Yura Mitskevich, said the company is selling all of its out-of-state holdings.

Kurylo said the Lerner Company managed the property during the last four years.

“It has been good,” he said. “There is a bunch of stuff going on and a bunch of tenants that are interested. Whoever buys the property will have an opportunity.”

Kurylo said he did not know what the fate of the current occupants would be or if Lerner Company would continue management. Those decisions would be up to the new owner, he said.

Some of the occupants include Hobby Lobby, JC Penney, Bath & Body Works, Planet Fitness, Shoe Sensation, a Fridley movie theater and the Iowa Department of Transportation.

Included on the Ten-X listing is property information such as letters of intent from Marshalls and Pet Supplies Plus — both for 10 years. Neither Kurylo nor Mitskevich would confirm nor deny the involvement of the companies.

Tom Deimerly, director of economic development for the Marshalltown Chamber of Commerce, said the city will stand behind the new owners as they did the current ones.

“This is a rapidly changing world of retail,” Deimerly said.

The Marshalltown Mall provided businesses with space to use following the July 2018 tornado. One business, McGregors Furniture, temporarily moved from Main Street to the mall and is preparing a return to its original home.

Across the country shopping malls have become increasingly vacant as more retail stores have either moved out, gone out of business or evolved toward online business.

In the similarly sized community of Fort Dodge, its Crossroads Mall is slated to be torn down and replaced with smaller retail stores, a hotel and some offices.