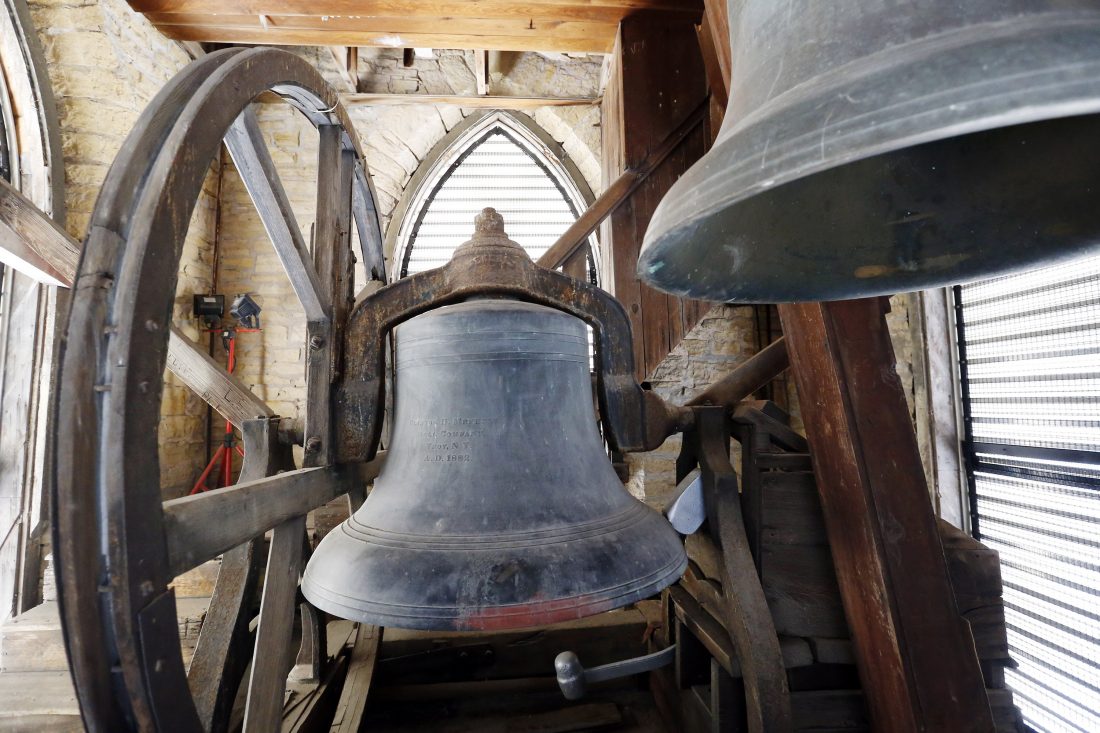 This Thursday, Jan. 16, 2020 photo shows the historic bells in the tower of King Chapel on the Cornell College campus in Mount Vernon , Iowa. The bells are ringing again after a chapel restoration project, which included structural reinforcements and clock repair. The largest bell, shown here, weighs 2000 pounds and was made by the Clinton H. Meneely Bell Company in 1882. (Liz Martin/The Gazette via AP)

MOUNT VERNON — Hearing the Cornell College bells ring again after 70 years is a feather in the cap of “Master of the Clock” Johnny Olshewsky.

After listening to remarks from college President Jonathan Brand, a couple dozen staff, students and community members stood in the bitter cold and tossed purple and white eco-friendly confetti as the bells chimed their signature eighth-notes followed by 12 peals to mark the noon hour.

“To some of us, there’s something magical about the clock,” Olshewsky said. “It’s hard to explain. … It was a dream come true to hear the bells ring for the first time.”

That first time actually was back on Oct. 24. Last week’s ceremony officially celebrated completion of a tower restoration project that began in 2018.

The bells were installed in 1882 when King Chapel was constructed. But in 1950, after engineers noticed they were contributing to the deterioration of King Chapel tower, an electronic carillon began marking the hours instead.

The bells are operated by a Seth Thomas tower clock, which is the longest running of its kind.

The clock was removed by a restoration expert, Chuck Roeser, of Lockport, N.Y., in June 2018, and reinstalled last year. The cleaning and restoration of the clock should allow it to continue keeping time for another 100 years.

While the clock was out of commission, the tower also was restored, with rotting wood replaced and the roof re-shingled.

Olshewsky first fell in love with the King’s College clock tower in 1988, when he was working security while then-Vice President George H.W. Bush visited campus for his presidential campaign. Olshewsky was tasked with taking Secret Service agents to the highest point on campus to keep watch.

Shortly after, Olshewsky was hired at Cornell College as a maintenance technician. Working under the shadow of the clock tower, he vowed to someday become “Master of the Clock.”

He plans to retire at the end of the school year, the restoration of the bells being a “feather in my cap,” he said. The bells, he assures, will be left in capable hands.

Olshewsky has been training Cornell maintenance technician Dustin Burnett on how to care for the tower. He said Burnette has the heart for it, plus “quite a lot of skill.”

The repairs to the tower, clock and bells, which cost a total of $730,000, were made possible by a gift from trustee Linda Koehn, who graduated from Cornell in 1966, and her husband, Tom Koehn. Other contributors include the State Historical Society of Iowa, the Stockman Family Trust, the Linn County Historic Preservation Commission and the Nina E. and Victor D. Merveaux Endowed Fund for Historic Preservation.

Dee Ann Rexroat, Cornell communications director and 1982 alumna, said she’s glad the “iconic” tower is being preserved for the college and for the Mount Vernon community.

The bells, she said, remind her of bells in a European cathedral with their rich sound.

Tashina Steggall, cross-country and track and field coach at Cornell, said the King Chapel tower is the first thing people see when they drive into town.

“It’s the heart of campus,” she said. “It’s a good sound, and it kind of goes with the tradition of the school.”