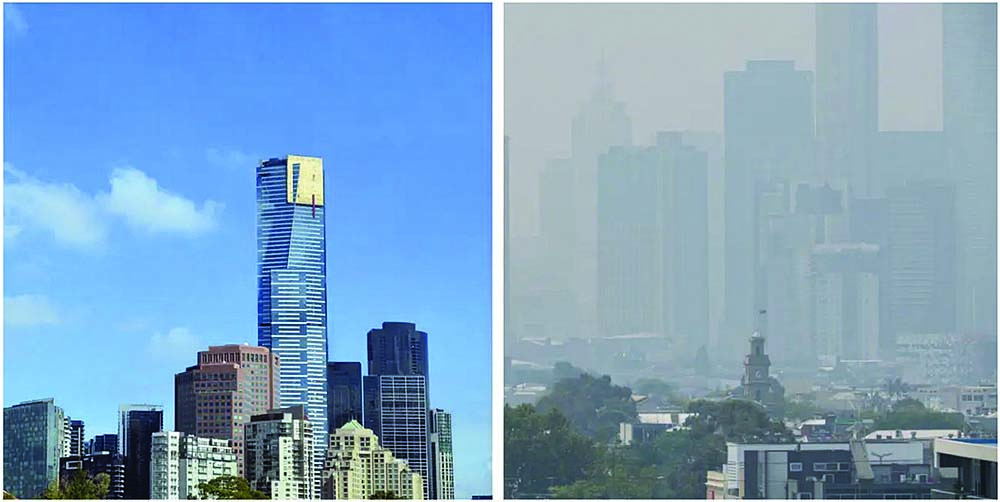 Contributed photo “The bushfires burning in Australia has created a massive change in the air in Melbourne. Residents are urged to stay home to avoid breathing the smoke.

The Kneebones, like many other Australia residents, have been effected by the bushfires which have consumed more than 15.6 million acres on the island continent. Even though Australia has an annual fire season, this year surpasses the previous ones.

Fortunately, the Kneebones is approximately 150 miles away from the Gippsland area, where the worst of the fires have been.

Gippsland is a rural region of Victoria, Australia. A huge tourist destination for the country with Phillip Island, Mount Baw Baw and more, Steve said the fires have struck during the peak season.

“Many of the small businesses, even though not affected by the fires are losing millions of dollars as a result of the fires,” Steve said. “We are hoping that people planning holidays consider these towns for their next holiday to show their support and help them to make ends meet. We love American holiday makers.”

Even with that much of a distance, however, the couple is not unaffected.

“The main effect for us and all of Melbourne suburbs has been the smoke shrouding us,” Steve said. “Depending on prevailing winds, this has sometimes lasted three or four days at a time. Visibility has been as low as 300 metres for hours at a time.”

The area the Kneebones are living in has not been evacuated, but authorities are warning residents to stay home to avoid breathing the outside air.

When Steve heard the fires were started deliberately, he was very angry. However, he said it has since been reported that less than 1 percent of the fires are believed to be the result of arson.

Like many Australians, Steve and Andrea have donated to money to emergency relief funds.

“The fires are pretty well all anyone is talking about at the moment,” he said. “People are being very generous in the financial donations they are making. Andrea works at an orthodontist who has sent a shipment of toothbrushes, toothpaste and lip balm to the firefighters at the Gippsland fires. Some people are offering accommodation to families who have lost their homes.”

Airbnb has offered people accommodation and a website called “Find a bed” has been created for people to offer room in their homes to evacuees.

Beyond money and lodging, Steve said people are sewing and knitting mittens and pouches for the numerous animals injured or orphaned in the fires.

A co-worker of Andrea’s organized an effort to send a truck-load of water to evacuees.

“Although the fires are a horrible occurrence causing mass destruction and tragedy on a massive scale, the whole Australian population and in fact people from all over the world, have rallied to help those who are suffering,” Steve said. “Sometimes it takes a disaster of this scale to bring forward the absolute best in whole populations who go to remarkable lengths to help their fellow man. It has certainly reinforced my faith in the goodness and generosity of mankind.”

To make donations to the fire effort, go to https://www.gerf.org.au/.