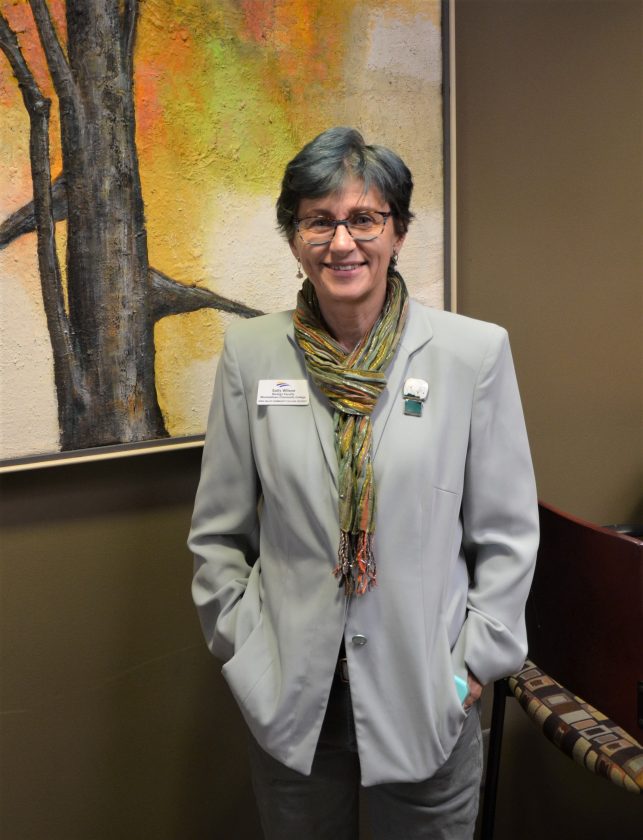 T-R PHOTO BY CHUCK FRIEND
Professor Sally Wilson poses for a photo after delivering remarks on weather, climate change and agriculture in place of the regularly scheduled speaker for the Shear Colbert Symposium Jan 22 at Marshalltown Community College

Unpredictable travel conditions on Wednesday led to the postponement of the Shear Colbert Symposium at Marshalltown Community College.

Dr. Bill Gutowski, meteorology professor at Iowa State University was to present a program on Climate Change. Instead he will present his program at 11 a.m. on Feb. 12 in DeJardin Hall.

As not all of those who were planning to attend on Wednesday got word of the postponement, MCC professors P.J. Colbert and Sally Wilson offered to share some current information on climate change, followed by an opportunity for questions and discussion.

“It was a small, but lively crowd who viewed several videos from National Geographic, NASA and The Weather Channel,” Wilson said.

The concept of the greenhouse effect was presented, followed by several videos displaying a wide range of scientific evidence of the effects of the warming climate.

“Currently, NASA scientist Wayne Esaias is following seasonal changes in bee pollination patterns, and with the help of volunteer beekeepers all over the U.S. has found that flowering has been moving a day earlier each year for the past two decades and now flowering is starting 10 days earlier than it used to,” Wilson said.

A subsequent film from NASA called “How Global Warming Stacks Up,” compared data on multiple factors that have been suggested as possible causes of global warming, such as sun spots, volcanoes, ozone depletion and orbital wobbling to human caused greenhouse gas emissions over a time period from the late 1800’s – the peak of the industrial age – through 2014.

Wilson said, “Human produced emissions are the only set of data that match up to the rate of temperature increase on the planet. Check it out and see for yourself.”

After the videos, audience members had many comments and questions and spent time discussing agriculture – which came as no surprise considering the symposium was in Iowa.

“What was a bit surprising to me was how agriculture was discussed,” Wilson said. “One audience member mentioned hearing political candidates talking about how farmers are on the front lines of sequestering or capturing carbon which should help mitigate the effects of warming. He wasn’t sure what this meant.”

Professor Wilson shared some examples of sustainable farming practices that have been shown to help tie up carbon in the soils. One example was intensive rotational grazing of livestock rather than concentrated animal feeding operations (CAFOs) which generate large, concentrated volumes of methane, a particularly potent greenhouse gas. Intensive grazing emulates the effect of herds of buffalo and antelope on the prairies, which is what built the beautiful rich Iowa topsoil.

She also pointed out that making it possible for all sizes of farms to succeed allows many more people to get back to the land or to stay in a family farm tradition.

“This would give more people a livelihood. Local farmers and laborers tend to spend their money locally which multiplies the effect of each dollar. Smaller farms tend to employ laborers rather than investing in large machinery which also provides more local jobs, and more local spending,” she said.

“If we all made a concerted effort to change this equation by spending just 10 percent or so of our food budget locally more small local neighbor farms could be sustained, more fresh produce would be consumed and the overall health of farmers, their neighbors and the environment would improve,” she said. “This is the basis for a sustainable farm economy, one that can lead to rural renewal. One that builds soil by trapping carbon in the form of rich organic matter, and refueling our crops and animals through nature’s cycles.”

To learn more about Climate Change the professors asked the public to please plan to join them on Feb. 12 to hear from ISU meteorology professor Bill Gutowski.