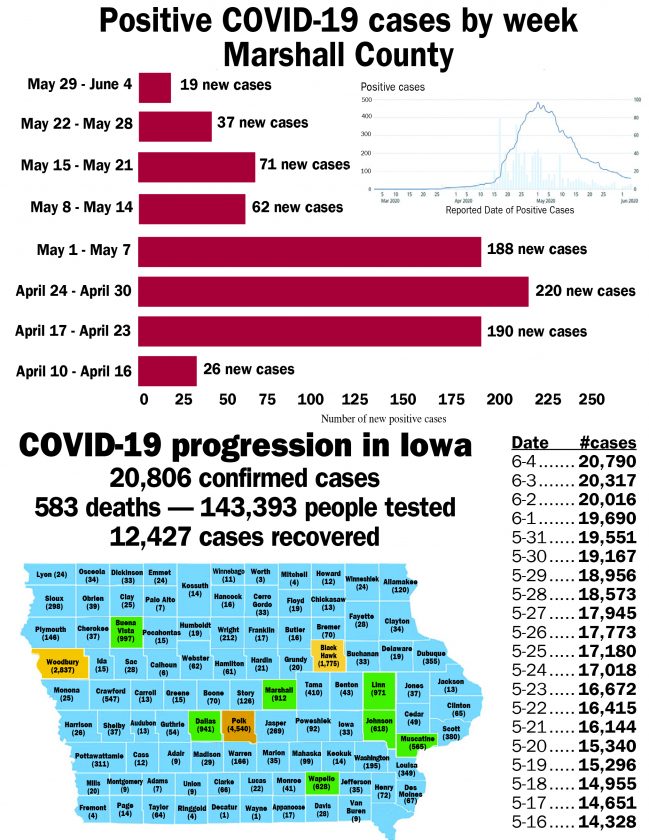 Even with a testing site reported coronavirus cases have decreased this week to one of the lowest increases since Marshall County’s first reported case.

This week saw an increase of 3 percent in reported positive cases with 884 cases reported last Thursday to 911 reported cases this week. Overall there were 27 new cases of COVID-19 reported.

At least 580 Iowans have died from COVID-19 and 18 of those deaths were residents of Marshall County – which is an increase of 16 percent from last week.

More men than women have reportedly been infected with 51 percent of the cases being male and 47 percent being female.

Businesses and local governments are asking residents to continue to wear masks in public and practice social distancing. Oftentimes people without symptoms can still pass on COVID-19.

Overall Iowa’s cases have steadily increased as the state starts to open up businesses. Iowa’s cases have increased by 12 percent. Last week ended with 18,573 confirmed cases and this week comes to a close with 20,790 cases. There were 2,217 new cases reported in Iowa.

Every week since the middle of May cases per week in Marshall County and Iowa have slowly decreased.