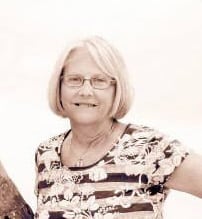 The generous and faithful spirit of Anna Mae Wilson, 72, of Marshalltown, left this earthly life on the morning of Friday, August 24th, at the Iowa Methodist Medical Center in Des Moines.

A Mass of Christian Burial will be celebrated at 10:30 a.m. Wednesday, August 29th, at St. Mary’s Catholic Church with Fr. Alan Dietzenbach, officiating. She will be laid to rest in the Riverside Cemetery. Visitation will be held from 5-7:00 p.m. Tuesday at the Mitchell Family Funeral Home with a 7:00 p.m. vigil service. For condolences, please visit www.mitchellfh.com. Ph. 641-844-1234.

Born Anna Mae Lolwing on June 22nd, 1946, in Marshalltown, she was one of three children born to Alfred and Rosella “Sally” (Wilkens) Lolwing. Anna Mae was educated in St. Mary’s School and later graduated from the Marshalltown High School’s Class of 1964. She loved her graduating class and still kept in touch with many.

On November 28th, 1964, she was united in marriage to Lawrence Wilson at St. Mary’s Catholic Church in Marshalltown. They made Marshalltown their home where they raised their three children and she was employed in many colorful careers. Most recently, she operated her own interior decorating business, Anna Mae’s Interiors. She had previously worked at Renner’s Flowers, Strand Paints, MMSC gift shop as manager, Younkers, owned and operated with her family G. Monelly’s Pizza on North 1st Street, and was a paraprofessional at Miller Junior High. She had a strong work ethic and her faith was the foundation of her life. She would volunteer when and where needed and treasured the time with her family. In order to keep up with her grandchildren, she learned to text and use Snap Chat. She knew few strangers and considered many to be her “best friends.” Anna Mae also enjoyed her “Card” Group of 50+ years.

Left to cherish her memory are Lawrence, her loving husband of 53 years; three children: Bruce (Tessa) Wilson, of Altoona, Jim Wilson (Kim Johnson), of Marshalltown, and Suzanne “Suzie” (Jason) Berkey, of Parkersburg; nine grandchildren: Casi (Jake) Pinegar and great-grandchildren Zander and Romi all, of Menlo, IA, Beatrice “Bea” Wilson, of Altoona, Reagan Wilson in Colorado, Quinn and Emmitt Wilson, of Altoona, Anna Wilson (named after grandma), of Cedar Falls, Caitlyn Berkey and Carter Berkey, of Indianola, and Samuel Bachman, of Parkersburg. Also surviving are her siblings: Helen (the late John) Ramsey, of Marshalltown, and Ken (Sue) Lolwing, of Marshalltown, as well as many cousins and friends. She is also survived by nieces and nephews she loved and were a big part of her life.

In death, she rejoined her parents and her son John Joseph who passed at birth.