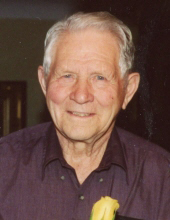 Clarence Howard Price, 98, passed away on January 13, 2020. He was a resident of Eldora Specialty Care nursing home, Eldora, Iowa.

He was the son of Steven Albert and Eva Loretta (Sherbon) Price. He was born on Oct. 27th, 1921, on a farm near Ackley. He received his early education in country schools in Hardin County Iowa. He attended high school in Eldora. Clarence married Bonnie Burgess on September 26, 1942, at the Eldora Methodist Church. He served in the U.S. Army Infantry from March 19, 1943 until January 31, 1946. He took his basic training at Camp Wolters, Texas then joined the 84th Railsplitter Division. Clarence drove a truck in the Red Ball Express delivering supplies to the front lines in Europe. His division spent Christmas thru January 10th fighting in the Battle of The Bulge. After Clarence’s honorary discharge from the service, he continued to farm in the Conrad Beaman area. He later farmed near Elma, Iowa and Steamboat Rock, Iowa. In his spare time he enjoyed the family farm acreage, traveling and spending time with friends and family.

Four children were born to Clarence and Bonnie: Janet, Stan, Lou Ann and Dan. Bonnie passed away in 1984. Clarence married Bernice Johnson on October 12th, 1990. Bernice passed away in 2013. He was a member of the Elma, Eldora and then Laurel United Methodist Church and the Conrad, Elma and Steamboat Rock American Legion Posts.