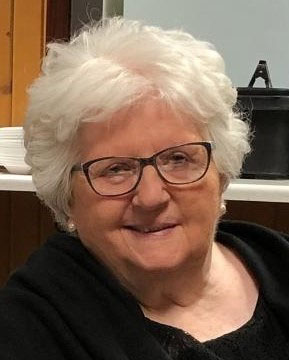 Hazel was born the daughter of Joseph and Amalia (Miller) Schrafel in Shell Rock, IA. She graduated from Conrad High School and business college, and worked at Marshalltown Credit Bureau. Hazel was united in marriage to Donald Jansen on April 26, 1949, at St. Mary Catholic Church in Marshalltown. They made their home on the farm in the Haverhill area. In 1983, Donald and Hazel moved to their home in Marshalltown. Hazel and Donald were active in their Catholic parishes and Knights of Columbus. During high school, Hazel enjoyed marching band trips out of town and continued her musical interest singing and playing guitar on radio shows. Most important to Hazel was being a loving wife, mom, and grandma. She was a talented homemaker who enjoyed cooking, gardening, canning and quilting. Homemade pickles and homemade noodles were specialties. Hazel loved her time with Donald, going for daily walks, fishing, dancing and entertaining family together. She was so interested in the lives of each family member. Hazel’s sense of humor, strength and faith shined through. You could always depend on Hazel for a witty come-back. She passed along her love of life’s simple pleasures while entertaining three generations of her family, always finding time to play cards or join little ones for tea parties.

The family would like to extend their heartfelt appreciation to Hazel’s many care-givers of the past 12 years at Southridge Specialty Care, Glenwood Place and Grandview Heights Rehab and Healthcare.