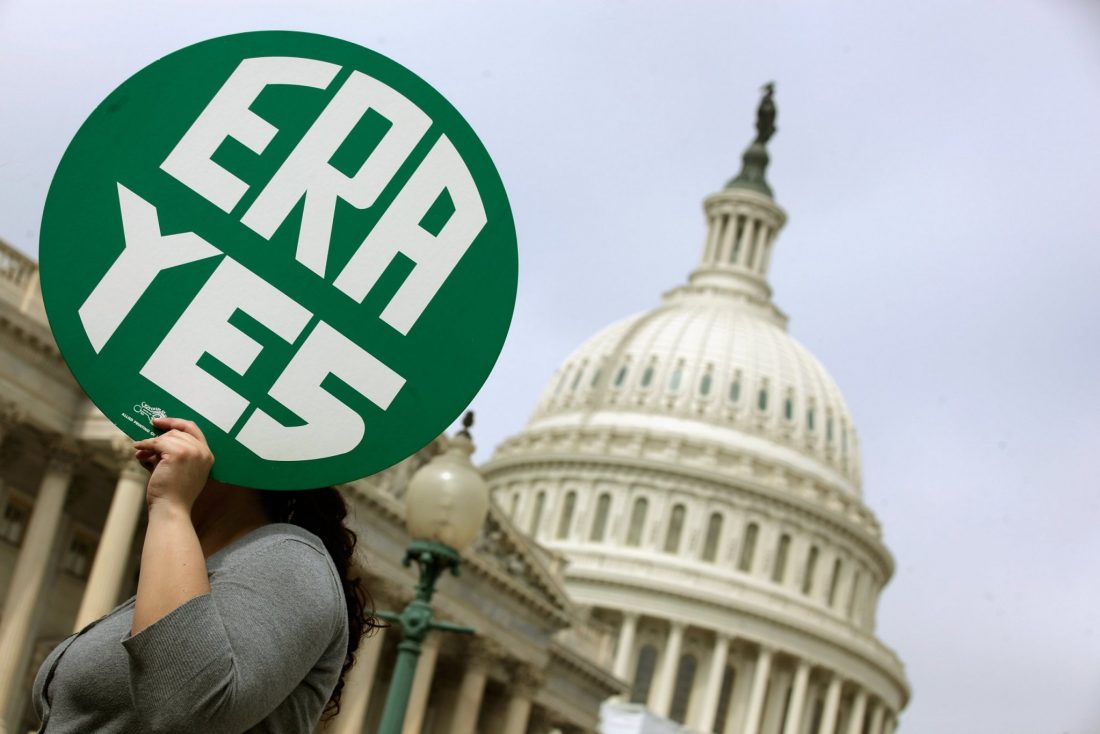 contributed photo A woman hold up a sign during a rally to mark the 40th anniversary of congressional passage of the Equal Rights Amendment (ERA) outside the U.S. Capitol in 2012.

The Equal Rights Amendment is not yet the law of the land and discrimination on the basis of sex is not prohibited by our Constitution.

The ERA was first proposed to Congress in 1923 and reintroduced every year. It took almost a half century to achieve the required two-thirds vote from the U.S. House of Representatives (1971) and approval by the U.S. Senate (1972).

Of course, that is not the end of the story because the ERA still had to be ratified by the states within a seven-year deadline. And with that, we have traveled the long and winding road fraught with bumps, barriers, and dead ends leaving the proposed amendment waiting, forgotten, and often considered “old news.”

Iowa was among the first group of 35 states to approve the ERA legislation in 1972. However, despite an extension of time till 1982, the country remained three states short of the necessary 38 for ratification. Thus, the ERA languished in a sort of comatose condition and appeared defeated.

However, in 2017 the ERA reemerged, perhaps due in part to attention fomented by the “MeToo” movement, when it was ratified by the state of Nevada followed by approval in 2018 by Illinois. This year, the Virginia legislature became the 38th state to ratify the ERA, thus hitting the target of support for two-thirds of all states.

End of the story? NO. Although the required 38 states have now ratified the ERA, it is past the ratification deadlines. Plus, there is the minor issue that five of the states that had earlier ratified, have voted to withdraw their ratification.

Thus, challenges remain to the ERA ever becoming the 28th Amendment to the Constitution. After the 38th state ratified, the House of Representatives voted to extend the deadline of the passage of the ERA through House Joint Resolution 79 on Feb. 13, 2020. Now it must be voted upon by the Senate in Senate Joint Resolution 6.

So, amidst all of this history and the current state of anti-discrimination laws, the question of “do we still need the ERA” is one that should be honestly faced. However, it is clear that using Iowa as an example, we must pass the ERA.

Discrimination against women exists, as evidenced by the sad fact that women are still paid 78 cents for every dollar paid to men, there are more than 200,000 women in Iowa living in poverty, and women and children make up 87% of the poor in Iowa.

The League of Women Voters of Ames and Story County calls upon Sens. Chuck Grassley and Joni Ernst to vote YES on S.J. Res. 6 and ensure the final ratification of the ERA.

Without the ERA, we agree with the late Associate Justice of the Supreme Court, Antonin Scalia: “Certainly the Constitution does not require discrimination on the basis of sex. The only issue is whether it prohibits it. IT DOESN’T.”

Linda Serra Hagedorn, Ph.D., is the president of the League

of Women Voters of Ames and Story County.