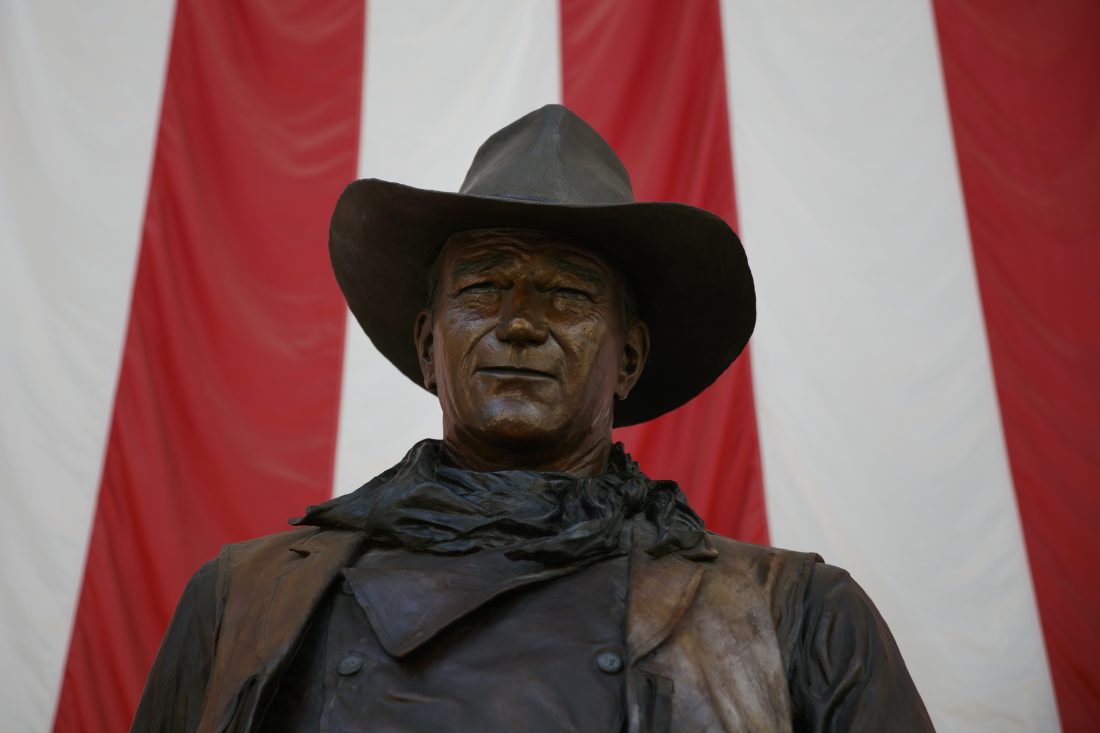 Some California Democrats want Orange County to strip John Wayne’s name off their airport because of some racist and homophobic things he said in an interview.

Wayne, of course, was born Marion Robert Morrison in Winterset in 1907. He became one of the most successful actors in history. He died in 1979 at age 72.

I don’t know what the fine people of Orange County should do about their airport name.

I suggest they not pick a person.

Who could live up to the scrutiny?

We’re all sinners and these days there’s a concentrated effort to make sure every sin is paid even posthumously.

I wondered if the flap over the airport would affect the John Wayne Birthplace and Museum in Winterset. I called Brian Downes, the former Chicago Tribune reporter who is executive director of the attraction.

“We’ve been packed lately,” Downes said. “I don’t know how many for sure we had, but they were backed up out the door.”

Wayne has kept his drawing power in ways other Iowa legends haven’t. Cleveland Indians legend Bob Feller died in 2010 and the museum in his native Van Meter soon followed.

The museum is now Van Meter’s city hall with a large exhibit honoring “the heater from Van Meter.”

What to do with the legacy of Wayne provides an interesting challenge for Iowans.

I grew up in Winterset. The main street through town was named in his honor when I was a kid. I watched Wayne Westerns with my dad.

“The Quiet Man” is my favorite romantic movie. “True Grit” and “Rio Bravo” are as good a way to winnow away a lazy Saturday afternoon as I can muster.

As fiction, they’re harmless, but I worry too many people think John Wayne Westerns are in any way a historically accurate portrayal of how the Western United States was “settled.”

They’re not. And one could make a strong argument that so many movies, both by Wayne and scores of other Westerns, have badly mislead Americans about the history of this nation, especially atrocities against natives.

“I don’t feel we did wrong in taking this great country away from the Indians,” Wayne said in the infamous Playboy interview. “Our so-called stealing of this country from them was just a matter of survival. There were great numbers of people who needed new land, and the Indians were selfishly trying to keep it for themselves.”

Phew. It gets harder and harder to like this guy every quote I read.

The dictum of this era is that I should renounce Wayne, maybe burn a photo of him and post the video to Instagram to prove how sensitive I am.

But I never watched a John Wayne movie because of what the Duke thought about politics, race or history. I did not take my idea of what it is to be a man from his characters, either.

I watched them to be entertained. That I am entertained by those movies may rankle some people, but I generally believe what I do with my own time is my own damn business.

As for Wayne, don’t look for Winterset to burn down his birthplace and topple the nice bronze statue out front of the museum.

The birthplace is a private not-for-profit outfit. They’re not a public entity and as such not subject to the whims of cultural waves. Wayne’s association with Winterset will be preserved.

Some people will think this is a bad idea, that Wayne should be loathed rather than adored.

But that is the short-sighted nature of things these days. Everything is a dichotomy. Sinners and saints. Good or evil. Hero or villain.

But that all-or-nothing approach is not human nature.

Wayne once said, “Each of us is a mixture of some good and some not so good qualities. In considering one’s fellow man it’s important to remember the good things …

“We should refrain from making judgments just because a fella happens to be a dirty, rotten son of a bitch.”

I condemn Wayne’s comments in the Playboy article. They’re indefensible.

But I believe people are more than one thing. I believe a person can create art and say terrible things. George Washington and Thomas Jefferson both owned slaves, yet without their guiding hands, we would not be here to debate the propriety of honoring them.

Like most things, it’s all a matter of perspective. The Bible offers some stern guidance on the matter of idolatry.

Maybe we should look at Wayne less as a cultural hero or icon of manliness and simply see him as a man.

All men have the capacity to be good and rotten SOBs.