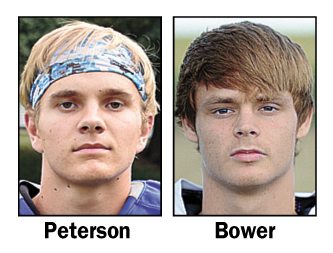 DES MOINES — The Gladbrook-Reinbeck football team won its 29th straight game on Friday night with a 55-13 drubbing of Class A District 5 opponent Grand View Christian on the road.

Quarterback Hunter Lott was 12-for-17 passing with 203 yards and two touchdowns in the game, and Walker Thede hauled in one of those touchdowns as well as five other receptions for 141 yards for the No. 3 Rebels.

COLO — The Colo-NESCO football team earned another win in 8-man District 5 play on Friday with a 67-6 shellacking of Seymour-Moulton-Udell at home.

Philip Bower led the way for the Royals (5-1, 4-0) with 178 yards rushing and three touchdowns, including a 57-yard scamper. Mason Lytle also had 71 yards on the ground with two scores.

Garrett Packer was the lead tackler for Colo-NESCO with four solo takedowns and eight assists.

ST. ANSGAR — The Grundy Center football team had a 21-14 lead over Class A No. 8 St. Ansgar on Friday night, but the Spartans would go on to lose to the Saints 42-21 in their Class A District 3 matchup.

Aaron Havens had 16 tackles against the Saints (6-0, 4-0) and Drew Rathe had an interception for the Spartans.

MORAVIA — The Meskwaki football team lost an 8-man District 5 game to Moravia on the road on Friday night by a score of 77-22.

Taurice Grant was 11-for-26 with 112 yards passing with two touchdowns and four interceptions for the Warriors (0-6, 0-4). Grant was the leading rusher as well with 67 yards on 17 carries and a touchdown.