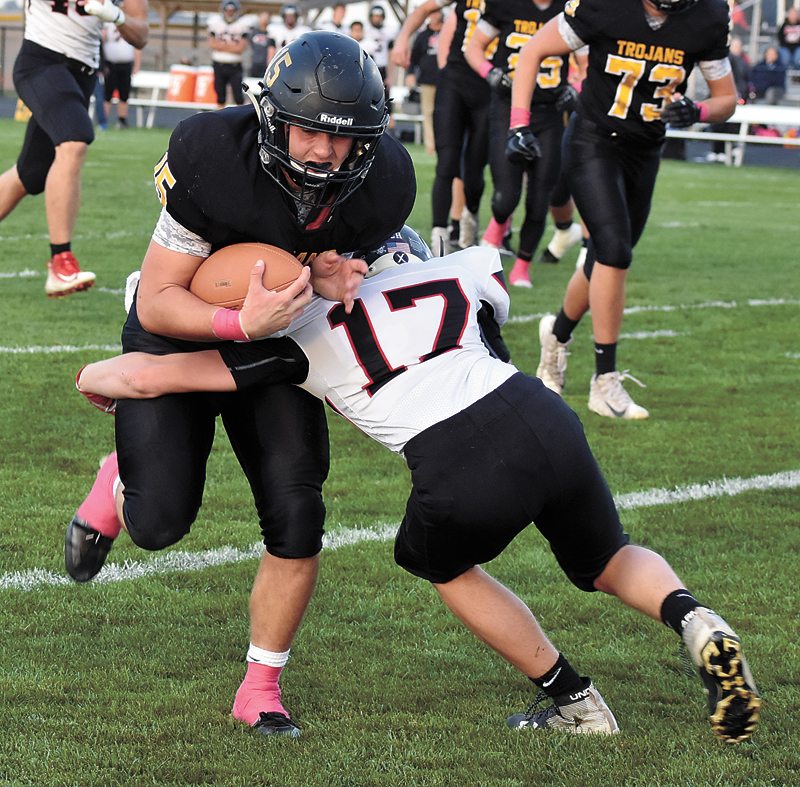 T-R PHOTO BY THORN COMPTON • West Marshall running back Alex Dickey powers through a tackle by South Hardin’s Tyler Briggs during the Trojans’ 48-0 shellacking of the Tigers in State Center on Monday night.

STATE CENTER — At halftime, the West Marshall football team owned a 32-0 lead over South Hardin on Monday night in a Class 2A District 3 game rescheduled from Friday due to bad weather.

The lofty lead was thanks in large part to three Tigers turnovers in the second quarter, but it wasn’t totally insurmountable.

That was, until Trojans senior Beau Coberley got his hands on the opening kickoff in the second half.

At first, the return looked to possibly be disastrous, with the ball sailing over Coberley’s attempt to catch it, but when the speedy senior did get his hands on the ball he scampered to an 85-yard score to essentially put the nail in the South Hardin coffin just a few seconds into the second half.

After the 48-0 win for West Marshall was completed, Coberley said his mistime on the catch actually ended up benefitting him in the long run. 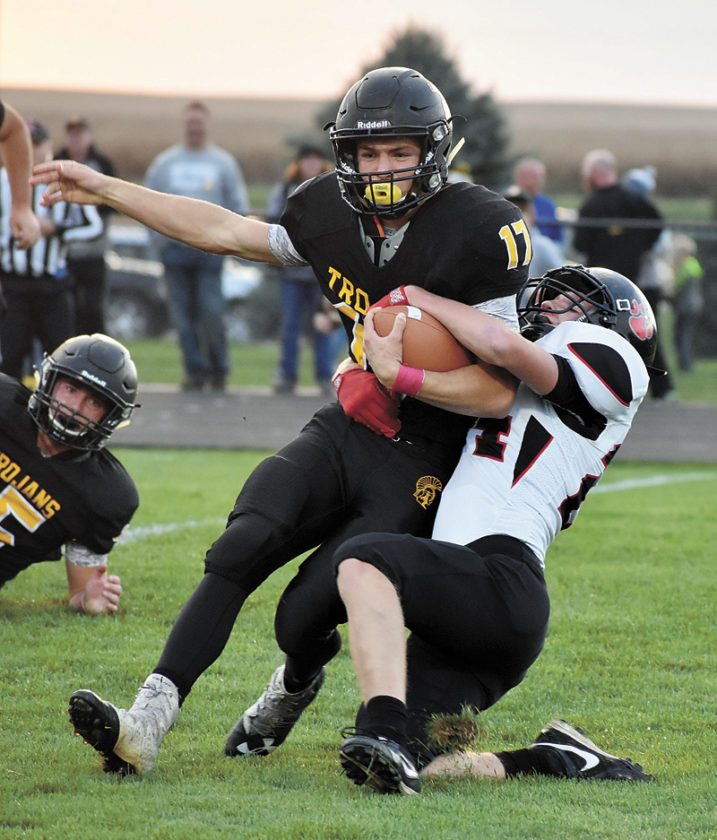 “After the play I was thinking about it and that was actually a good thing,” he said. “When it went past me it made the defense flow over to that side. Our play was designed to go left and when I turned, everyone had flowed to the right so it was just a wide open lane for me and I just took it. Got great blocks and I couldn’t ask for a better team.”

Coberley’s touchdown was just one of seven touchdowns the Trojans (4-3, 2-2) put up on the Tigers (1-7, 0-4) on Monday night. West Marshall scored in all three facets of the game, including Coberley’s return and a 90-yard touchdown of an interception from Ryan Sebastiano with 16 seconds left in the second quarter.

Trojans head coach Cody Hackett said his team was clicking in all three phases in the win.

“Overall I think it was a good game in all three aspects of the game. Offensively we were moving the ball very well from the get-go with our running game, so that worked out well for us and it kind of set up the pass for us,” Hackett said. “We were maybe a little nervous about running the ball since they run a cover-three, eight-man box, but our boys accepted the challenge this week offensively.”

As Hackett said, the running game was unstoppable at times for West Marshall, led by senior Alex Dickey rolling for 73 yards on 16 carries, including two scores. Dickey said he wouldn’t have been able to be as effective as he was against South Hardin without the big boys up front. 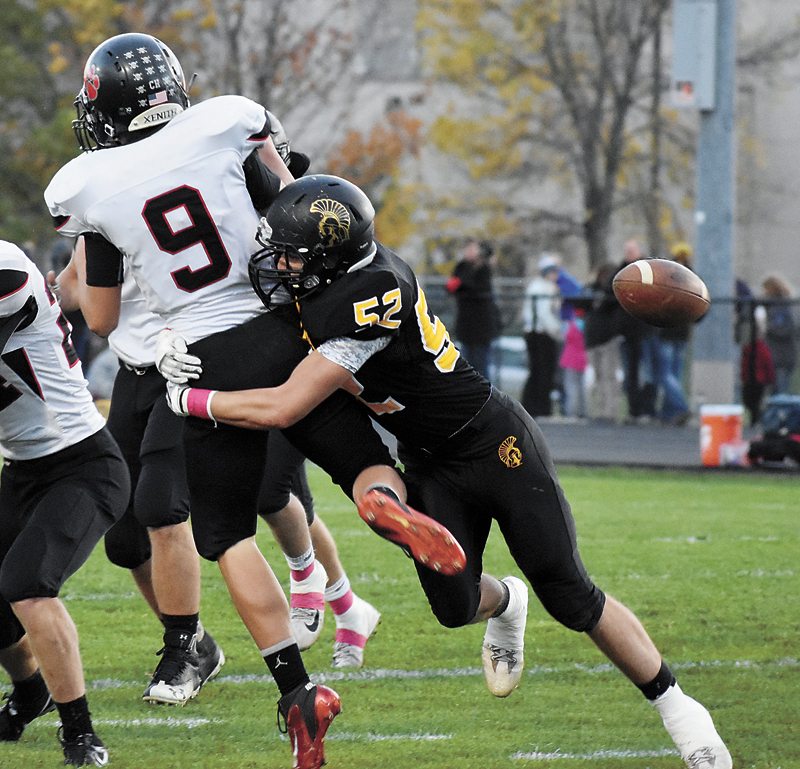 “They did a really good job and opened up a lot of holes,” Dickey said of his offensive line. “I think most of the credit goes to them, I just found the hole and they left a pretty big one. That made it easy for me.”

While Dickey wants to credit his line, Hackett said his senior running back had an extra edge to him on Monday night that the Trojans want to utilize over their two remaining games this season.

“Some things I noticed from him tonight that I hadn’t really noticed a whole lot is making that first guy miss and maybe making that second guy miss,” Hackett said of Dickey. “You could just see it in his eyes and the style of running he had tonight, he was a man on a mission. Breaking tackles, getting in the open and making plays, that’s something we need to finish off the season.”

Even Coberley got into the mix in the running game, going for a 57-yard scamper in the third quarter to set up a 22-yard run by Dickey, the last score for West Marshall in the game. Coberley, who also had a receiving touchdown, said he enjoys getting the ball in various ways to provide an extra spark.

“I like getting the ball in different circumstances, it just mixes things up and gets our juices flowing, which is just really fun,” he said. 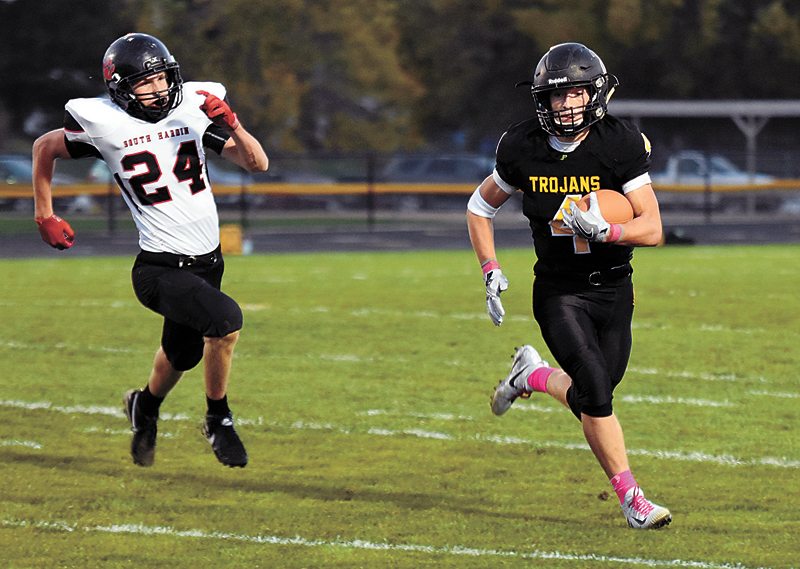 Hackett, too, said he likes mixing up how Coberley gets the ball, especially when teams lately have focused on taking the speedster out of the game.

“Tonight we still got Beau involved, motioning him in form the backfield out to receiver, and we will have to continue doing those things because we know that teams are going to double him because we know he is one of if not the best skill player in our district I feel,” Hackett said.

As for quarterback Cameron Bannister, he wasn’t called upon to do as much as usual because of the effectiveness of the running game, but the junior still had an efficient 5-8 line, including two touchdown tosses.

In fact, Bannister hit four different receivers in the game with his five completions, and Hackett said he likes seeing his signal caller spread the ball around rather than just look for Coberley.

“We have a great group of skill guys and we trust any one of them with the ball in the open field and we think they have pretty good hands,” Hackett said. “I think Cam is starting to feel a little more comfortable saying ‘maybe we don’t always have to get the ball to Beau, lets get Josh Larson, Ryan Sabastiano or even Jake Tollefson involved.’ Getting those other guys the ball is a great thing for Cam and building his confidence.” 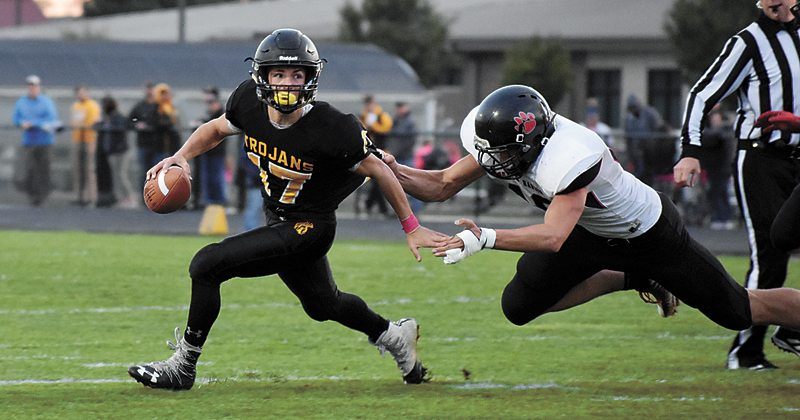 Of course, while the offense was great, the defense is the true star of any shutout, and that Trojan defense was no exception to that rule. From the first play, West Marshall was stifling defensively, holding South Hardin to well under 100 total yards.

Hackett said dominating the Tigers like they did on Monday is no easy task, considering the competition they’ve given some of the better teams in the district.

“Our defense played great tonight, you look at some of the scores for South Hardin and they played (Aplington-Parkersburg) tough until about the middle of the third quarter, but our defense stepped up big,” Hackett said. “That is the identity of our football team, we fly around and we are physical, we’re tough, we’re aggressive. It’s not just one person making tackles, we are gang tackling and everybody is flying to the ball.”

While the West Marshall defense was flying around, South Hardin as a whole seemed sluggish to start, and being down 32 points at halftime didn’t help that sluggishness subside. Tigers head coach Nick Eller said he’s not sure if the extra few days off before this game caused his team’s lack of effort or not, but the way his team showed up in State Center was unacceptable.

“I don’t know I really don’t. It don’t know if it was just a weird day or what, I really don’t,” Eller said. “That’s the million dollar question if I could figure that out, but I really don’t. I thought we were scheme-wise ready to play as of Friday, but maybe that all fell apart over the weekend. It’s not a good effort by everyone and that comes back to me, so I will take the blame for it because I am the one that is in charge of it.” 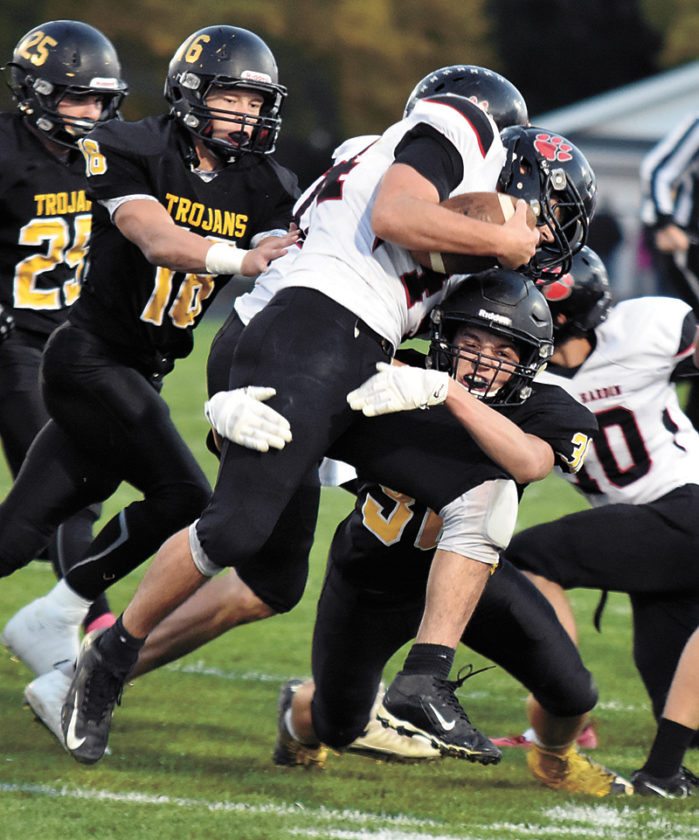 South Hardin has now only scored three points in the last two games, after this shutout and a 41-3 loss to Dike-New Hartford two Fridays ago. Eller said the Tigers’ lack of offensive production ultimately falls on him as well.

Both West Marshall and South Hardin are on a short week now, as they each face an opponent just four days from now on Friday night. The Tigers play host to Roland-Story, and Eller said he is looking forward to the quick turnaround after this loss but he wants to see more out of his team in their last game of the year.

“It will be a nice thing to be able to flush this away quick and start over with Roland-Story, they’ll be a lot tougher opponent than these guys,” Eller said. “It’ll be interesting to see if we can flip this around and refresh tomorrow.”

The Trojans finish up with back-to-back road games to end the season, at Saydel this weekend and at Roland-Story in the final week. With this win being the final home game, a lot of emotions were had throughout the matchup, and Coberley said getting to finish up his final game at home with such an emphatic win is more than he could have dreamed.

“Just thinking about all four years playing with these seniors, they are my best friends and I just can’t ask for a better night,” he said. “We came out and played together as a team, made some good memories and I couldn’t ask for anything better.”

T-R PHOTO BY THORN COMPTON • West Marshall running back Alex Dickey powers through a tackle by South Hardin’s Tyler Briggs during the Trojans’ 48-0 shellacking of the Tigers in State Center on Monday night.