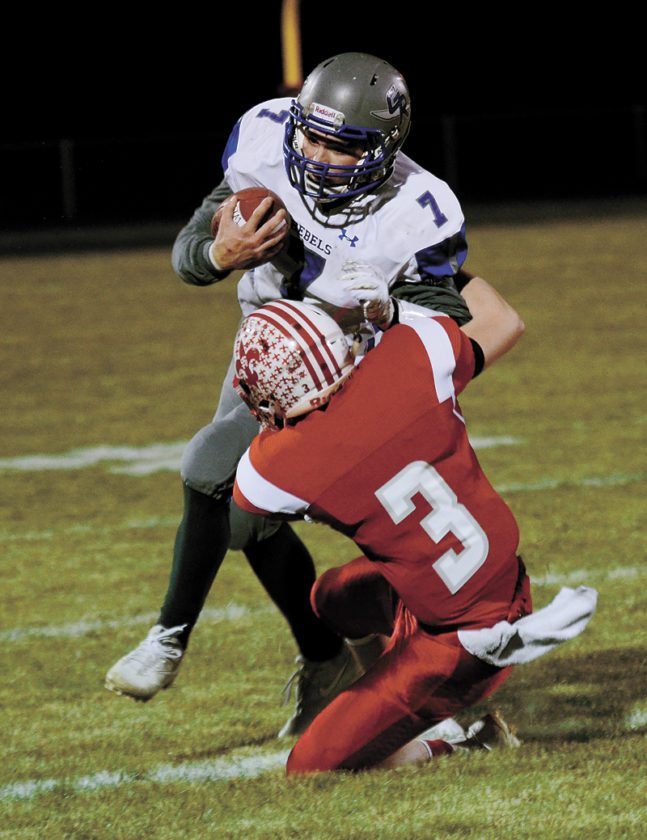 DES MOINES — The Marshalltown area football teams were unable to advance to the UNI-Dome this fall, but a number of local preps were honored with selection to the Iowa Newspaper Association’s annual all-state football teams.

Gladbrook-Reinbeck, which qualified for its eighth-straight playoffs before falling in the state quarterfinals, had a total of seven players selected to the Class A all-state teams. Senior Walker Thede was at the forefront of that list, earning his third consecutive all-state honor with the Rebels’ lone first-team selection.

Thede was tabbed as a first-team wide receiver after finishing second in Class A with 756 receiving yards. He hauled in 37 passes at a 20.4-yard average with nine touchdowns.

Thede was a third-team all-state selection in 2016 and a second-team pick in 2015. He is joined as a three-time all-stater by Grundy Center senior offensive lineman Jordan Hook, who was named to the third team this fall after first-team honors last season and second-team laurels as a sophomore.

Joining Thede on the all-state teams from Gladbrook-Reinbeck were a quartet of second-team defensemen and two third-team picks. Seniors Mason Skovgard and Gage Murty were chosen for the defensive line, senior Kyle Koppen was tabbed at linebacker and freshman Keagan Giesking was selected at defensive back.

GMG junior Brock Baldazo rounded out the area all-state selections in Class A with a third-team honor at punter. Baldazo averaged 37.2 yards per punt on 40 attempts with a long of 61.

Accompanying its first winning season since 2005, the East Marshall football team had a pair of representatives on the Class 2A first team. Senior wide receiver Logan Nicholson and junior linebacker Noah Bandstra stacked up among the best in the state at their respective positions and were honored accordingly.

Bandstra led 2A with 111.5 total tackles, posting 91 solo stops and 20.5 assists. He had one interception and also served as the Mustangs’ leading rusher from his fullback spot. Nicholson was the second-leading receiver in 2A with 896 yards on 49 catches, accruing 10 touchdowns along the way.

West Marshall junior defensive lineman Joe Halverson was pegged with his first all-state honor after leading the Trojan defense with 81.5 tackles. He had 13 stops for loss and eight quarterback sacks, which ranked fifth in the state.

In Class 1A, BCLUW senior Brad Barkema was awarded first-team honors at defensive back. He had 40.5 tackles and two interceptions for the Comets while also finishing among the division’s passing leaders at quarterback.

Colo-NESCO senior offensive lineman Bryce Niemeyer earned his first all-state honor as well, leading the Royals to a 6-3 record in the 8-Man class.