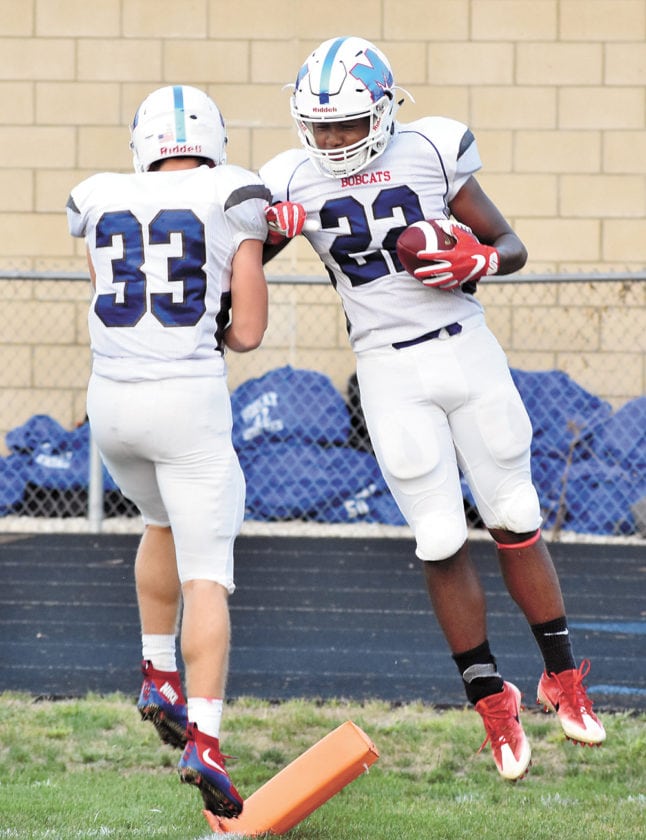 T-R PHOTO BY THORN COMPTON - Marshalltown senior running back Derrick Garth (22) celebrates one of his three touchdown runs with teammate Giorgio DiIorio (33) during the Bobcats’ 50-26 victory over Des Moines North on Friday night in Des Moines.

DES MOINES — Last season the Marshalltown football team didn’t score more than 28 points in any game, and it didn’t have a running back go for over 100 yards in a game.

Both of those marks have been hit already for the Bobcats, as they beat Des Moines North in their season opener on Friday night 50-26 behind a dominant rushing attack.

MHS senior Derrick Garth had a field day in his 2018 debut, going for 140 yards and 3 touchdowns on 13 carries, starting with a 30-yard touchdown scamper on the first offensive play after the defense forced a fumble on the opening drive.

“It was really nice, the linemen lined it up perfectly for me throughout the whole game,” Garth said.

The offensive line, led by captains Kyle Griego and Keaton Baccam, really did open holes all over the place against the Polar Bears (0-1). 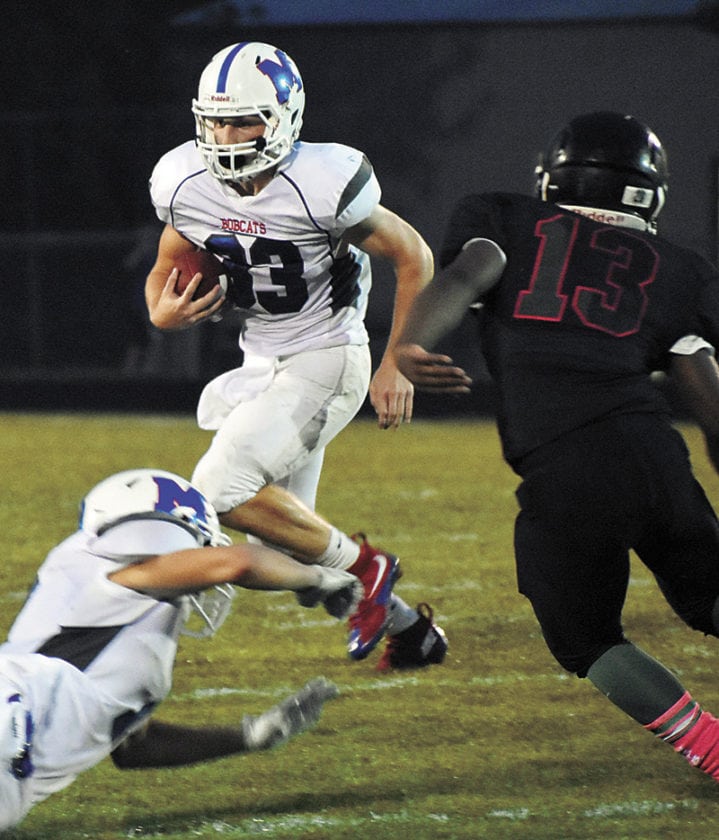 Carson Beals had 75 yards and two scores for in his varsity debut for the Bobcats (1-0), including a 56-yard score that went right through the heart of the defense. Giorgio DiIorio and Kabba Pins chipped in 51 and 39 yards on the ground respectively, and second-year head coach Adam Goodvin said this was the kind of attack he wanted to see from his team to open the season.

“We have some tough kids and that’s what we’ve been preaching to them all season, we have to get tough,” Goodvin said. “That’s the only way we’re going to win football games.”

In previous years, particularly last season, Marshalltown has been a pass-heavy offense, but Goodvin said he knew that needed to change if they wanted to see success on the field.

“I said earlier we have to develop a run game and be effective with it, you can’t be so predictable and just pass the ball all over the place,” he said. “That’s not what we do any more, that’s the old Marshalltown, we don’t have the guys to do that. That’s all part of the toughness thing too, toughness and running the football, and the kids are buying in. I think they are enjoying it and having fun and I think they are seeing how fun it can be to blow kids up and be effective running the football.”

The Bobcats struggled through the air in the first half, leading to a 1-for-7 line and just six yards and an interception for quarterback Jacob Smith in his first 24 minutes as starter. It got better in the second half, however, as Smith found Dylan Eygabroad and Jonathan Hernandez for long strikes to set up eventual scores. 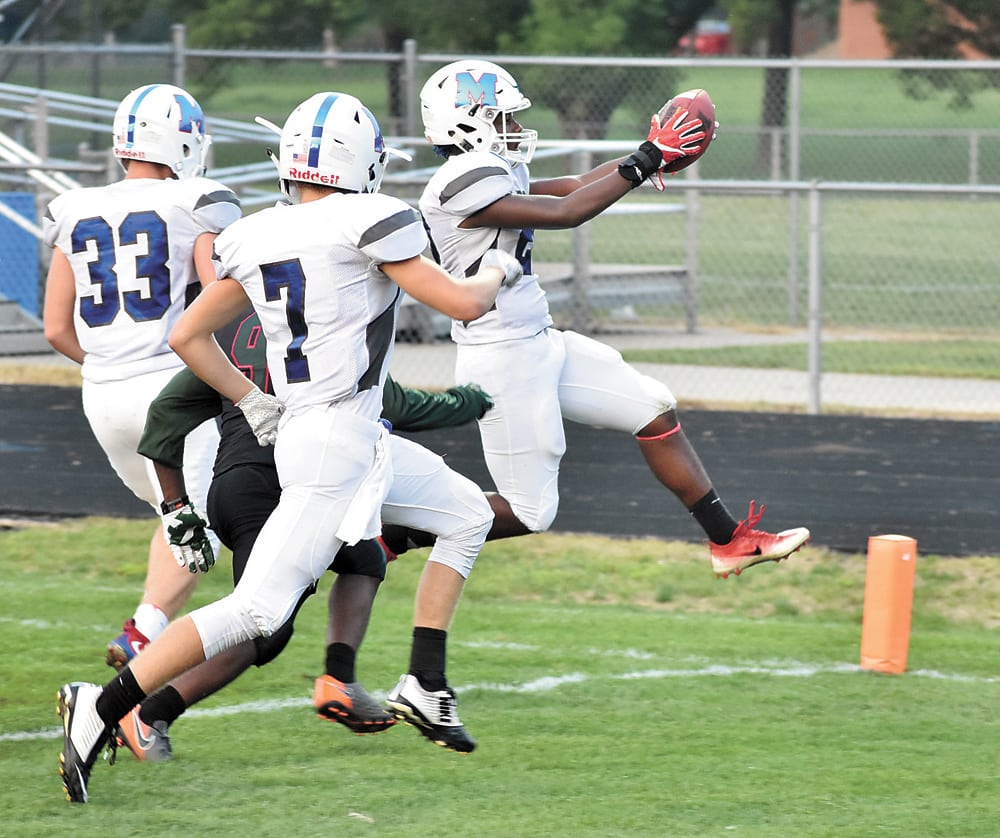 “He is going to get better each week, that’s Jacob’s personality. He’s a grinder, he will get after it and learn,” Goodvin said. “He is always asking me questions and we are working through his reads and everything.”

On the other side of the ball Marshalltown stuffed the run almost as well as it ran it on offense. No Des Moines North rusher reached over 34 yards and every touchdown the Polar Bears scored was through the air.

There were a bit too many passing yards for North quarterback Jaheim Temple, however, as he went 12-for-30 with 252 yards, four passing touchdowns and an interception, but Goodvin said with the athletes the Polar Bears have they are bound to score.

“I think we did a great job, Carson Williams did a great job stepping up for his first varsity start. He played great from sideline to sideline,” he said. “Give credit to them, they made some plays too on a couple of deep passes where we had guys in position, so credit goes to them as well.”

Williams was quite effective in the outside rushing game, multiple times forcing North rushers to cut back inside instead of stretch the run to the sideline.

“Our line did a good job keeping them in and when they got to them they flushed, and that’s when I took over,” Williams said.

This was the first time the Bobcats have started the season with a win since 2015, when they actually started 2-0 and finished the season at 3-7. Goodvin said this was a great start to the year, but the boys aren’t nearly where they’d like to be by the end.

“I think they are picking up on it, but we have a lot to work on and they know that,” Goodvin said. “A win is always good, we are going to enjoy it while we can and move on.”

PHOTO BY TROY HYDE/NEWTON DAILY NEWS – Colfax-Mingo Damir Gumerov (9) is brought down by a cast of BCLUW defenders during the first half of Friday’s football game in Colfax. Gumerov rushed for 106 yards to help the host Tigerhawks prevail, 41-26.

T-R PHOTO BY ADAM RING – Gladbrook-Reinbeck quarterback Jackson Kiburis (8) is hauled down from behind by Don Bosco defender Mason Denton during the first half of Friday’s 8-man football game in Gilbertville.

T-R PHOTO BY THORN COMPTON – Marshalltown senior running back Derrick Garth (22) celebrates one of his three touchdown runs with teammate Giorgio DiIorio (33) during the Bobcats’ 50-26 victory over Des Moines North on Friday night in Des Moines.

T-R PHOTO BY ROSS THEDE – South Tama County linebacker Aaron Neave, back, brings down Benton Community running back Matthew Davis during the first quarter of Friday’s game in Tama. Davis finished with 124 rushing yards and three touchdowns as the Bobcats defeated the Trojans 45-13.

T-R PHOTO BY ROSS THEDE – South Tama County running back Payton Vest (2) tries to spin away from Benton Community’s Matthew Davis (22) during the first quarter of Friday’s football game in Tama. The host Trojans fell in their season opener, 45-13.