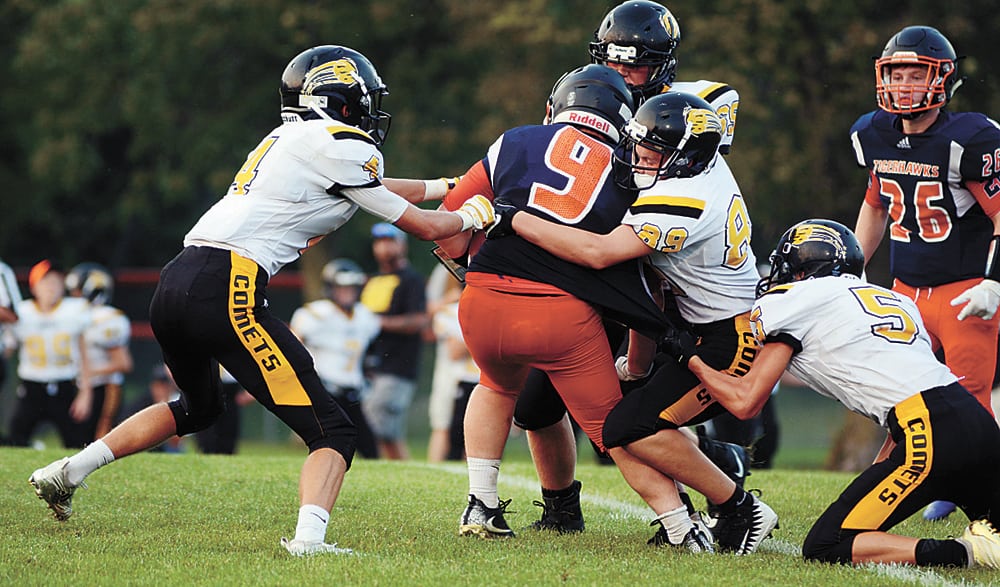 PHOTO BY TROY HYDE/NEWTON DAILY NEWS - Colfax-Mingo Damir Gumerov (9) is brought down by a cast of BCLUW defenders during the first half of Friday’s football game in Colfax. Gumerov rushed for 106 yards to help the host Tigerhawks prevail, 41-26.

COLFAX — The BCLUW football team answered Colfax-Mingo’s first punch with a 75-yard, eight-play drive that tied the game at 6-all in the first quarter.

Unfortunately for the Comets, Colfax-Mingo delivered a knockout punch with 21 straight points on its way to a 41-26 home win in the season opener Friday night.

The Comets young squad committed three turnovers and six penalties on the night. Colfax-Mingo converted all three miscues into points and pulled away before BCLUW closed to within two scores late in the fourth quarter.

“We are young. We made a lot of young mistakes,” BCLUW coach Anthony Jahr said. “We have a brand new quarterback. He made some young mistakes. We had some young linebackers who missed some reads, too.”

Zarek Hill returned the opening kickoff 75 yards to put the Tigerhawks up 6-0 just 17 seconds into the game.

BCLUW answered with a long TD drive that featured a 30-yard run by senior Koty Kruse. Senior Coby Willett finished off the drive with a 1-yard TD plunge to tie the score.

“We gave up the opening kickoff, then I was so proud of how we responded,” Jahr said. “Then they punched right back. That’s how the game works. We just didn’t respond again. We have to work on that.”

The Tigerhawks scored consecutive touchdowns to go up 20-6. BCLUW got within 20-12 after a 7-yard TD run by senior Jack Garber.

That’s when Colfax-Mingo (1-0) delivered the knockout blow. Junior Brady Berkey picked off Willett at midfield and returned the interception to the end zone to put the Tigerhawks up 27-12.

Berkey got another interception on BCLUW’s next drive. He then hit Hill on a 33-yard pass play before eventually scoring four plays later on a 10-yard touchdown run.

It was 34-12 at halftime, and Colfax-Mingo went up 41-12 in the third quarter after Berkey connected with junior Trystin Ross in the corner of the end zone.

Before the Tigerhawks’ final TD, BCLUW turned the ball over on its first possession of the second half. The Comets (0-1) used 10 plays to get into the red zone, but Willett was picked off in the end zone. Garber had a one-on-one matchup on the outside, but C-M junior Andrew Meinhart came away with the interception.

“We talked to the team about them being a young, inexperienced squad, and if we let them hang around, it wouldn’t end well,” Colfax-Mingo coach Jeff Lietz said. “We delivered the first blow, then let them come right back. That opened our eyes and woke us up a bit.

“Then we came back and scored and our defense cranked it up. We responded well.”

BCLUW scored a pair of touchdowns in the fourth quarter to get to 41-26. Dalton Critchfield, who rushed for 42 yards on 14 carries, scored from 1-yard out with 4:34 to play.

Kruse capped a four-play, 49-yard drive on the Comets’ final possession with a 13-yard touchdown run. Kruse finished with 158 rushing yards on 18 carries.

“Koty Kruse made some plays tonight. He has played football since his freshmen year. I was happy with how he ran tonight,” Jahr said. “Our offensive line looked good in spurts. We battled to bring it back to two scores, but we made too many mistakes to recover from.”

Colfax-Mingo outgained BCLUW 343-318, but the three turnovers were the difference. The Comets forced the Tigerhawks into one miscue late in the game, and Kruse turned the C-M fumble into points at the other end.

Willett finished 5-of-13 through the air for 82 yards and three interceptions. Garber hauled in four of those completions for 60 yards. Mason Yantis caught the other pass and gained 22 yards.