Bobcats held to single digits in all four quarters 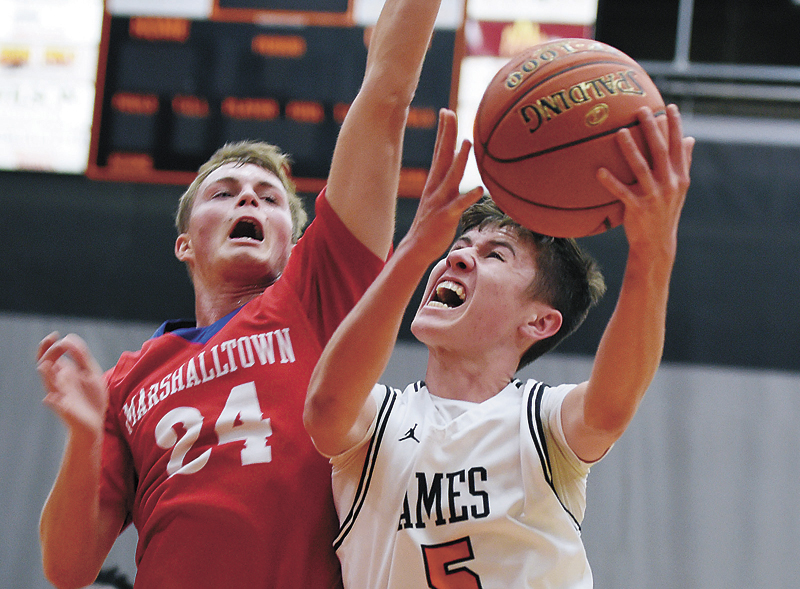 PHOTO BY NIRMALENDU MAJUMDAR/AMES TRIBUNE - Ames’ Casey Mumm tries for a layup around Marshalltown’s Jacob Smith during the second quarter of Tuesday’s game in Ames. The Little Cyclones won 43-25.

AMES — Holding a high-powered Ames boys’ basketball team to just 43 points was as much as Marshalltown High School head coach Michael Appel could have asked for.

Well, that and scoring at least 44.

Instead, the Bobcats were limited to a season-low output in a stifling 43-25 loss to the host Little Cyclones in Tuesday’s cross-CIML contest between former divisional rivals.

Marshalltown (7-9) was held to single-digit scoring in each of four quarters and put up the second-lowest scoring total by a Bobcat boys team in the last 18 years, suffering its fifth-straight loss in the process.

MHS freshman guard Armonniey Thomas scored a team-leading 12 points but was the only Bobcat with more than four.

“Holding them to 43 is a good number for us,” said Appel. “We missed a few open shots that I thought were pretty good shots and the turnovers kind of hurt us at the beginning of the game again. There were six or seven of those [turnovers] that ended with [Ames] going the other way.”

MHS leading scorer senior guard Jacob Smith was limited to just four points as Ames held the Bobcats to only three points in the second quarter, six in the third, seven in the first and nine in the fourth. Marshalltown tallied the first nine points of the fourth period to turn a 19-point deficit into 10, but the Bobcats went scoreless for the final 3 minutes of the game.

“They made it really tough on Jacob and a few times he was trying to force it a little too much,” Appel said. “He can still do his part spacing the floor, which creates driving opportunities and things for the other guys.

“We just needed a little more confidence to knock down some shots.”

Thomas made two 3-pointers and 1-of-2 free throws to account for all seven Bobcat points in the first quarter as MHS led 7-6 against Ames’ Senior Night starting lineup. The Little Cyclones’ five senior starters combined to score three points.

“We held Kellogg to seven, so I was pleased with our effort defensively,” said Appel. “This is a really high-powered offense and we held them way below their average.

“My message to the guys after the game was that I was happy with our defensive effort and sticking to the gameplan of really packing it in and using our speed to get out to the shooters when we needed to, but we’ve got to get the ball in the hole.”

Corey Phillips added 10 points for Ames, which has won five-straight thanks to its own defensive prowess. The Little Cyclones rank second in Class 4A allowing an average of 42.8 points per game.

The Bobcats try to snap their cold spell with a home game on Thursday against Ankeny, and a trip to top-ranked Waukee is slated for Friday.