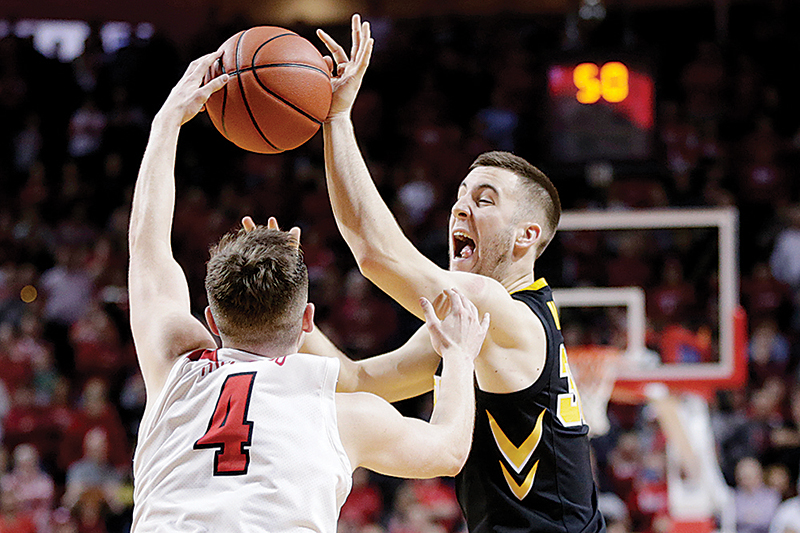 AP PHOTO - Nebraska’s Johnny Trueblood (4) deflects a pass by Iowa’s Connor McCaffery, right, during overtime in a Big Ten Conference men’s basketball game Sunday in Lincoln, Neb. Iowa got the ball back but was unable to defeat the host Cornhuskers, falling 93-91.

LINCOLN, Neb. — If this was the farewell to Nebraska coach Tim Miles at Pinnacle Bank Arena, it surely was one he’ll never forget. Neither will the ardent 12,300 fans who showed up to see the Cornhuskers wrap up a regular season in which they badly underachieved.

What happened previously this season didn’t matter on senior day.

Showing the fight often missing in other games, the short-handed Huskers hit a flurry of shots to wipe out a nine-point deficit with 50 seconds left in regulation and went on to beat Iowa 93-91 in overtime Sunday.

Amir Harris scored the go-ahead layup with 10.8 seconds left and Thorir Thorbjarnarson blocked Jordan Bohannon’s 3-point try at the buzzer to set off a celebration. The fans who’ve watched so much bad basketball this season were on their feet roaring, the Nebraska players danced at center court and Miles made his way back to the locker room to cheers and hand slaps.

“It was really emotional, I know,” Miles said. “I’m just so happy for the guys. I’m happy to walk out of Pinnacle Bank with such an important win. They deserved it and worked for it so hard.”

Glynn Watson Jr., who made seven 3-pointers, has been with Miles for four years and is well aware of the talk that’s swirling.

Were the Huskers playing for Miles?

“For sure,” Watson said.

But, he added, “We’re playing for Nebraska, playing for the coach and our team, each other. I know (fans and media) talk about it. There’s nothing I can do. Nothing nobody else can do. We have to keep fighting. We have to fight for each other. Go to the Big Ten Tournament and try to make a run.”

The loss, in Iowa coach Fran McCaffery’s return from a two-game suspension, was the fourth in a row for the Hawkeyes (21-10, 10-10 Big Ten).

Nebraska (16-15, 6-14), which had lost 11 of its previous 13 games and seven of them by double digits, trailed by as many as 16 points in the second half. Down 74-65 in the last minute, the Huskers made nine shots in a row and 10 of their last 11 in regulation, with Watson hitting three 3s and Palmer two before Palmer tied it at 81-all with his baseline drive with eight seconds left.

“I think you’ve got to give credit,” McCaffery said. “Those kids made some tough shots. We came up on them, we were contesting. I think if you have to do it over, maybe you run another guy at them. You have a lead, you don’t want to foul.”

Palmer finished with 27 points and Watson and Isaiah Roby added 23 apiece for a Nebraska team that used only eight players because of injuries and a suspension.

Luka Garza matched his career high with 25 points and Jordan Bohannon had 20 for the Hawks.

Their offense didn’t go dormant as much as Nebraska just kept pushing. Iowa made 9 of 10 free throws in the last minute of regulation but seemed almost powerless to stop an inspired Nebraska team.

“They just took it from us,” Bohannon said. “They just started making some crazy shots, contested shots, 25, 30 footers. We were making our free throws down the stretch. But they were making 3s to our 2s and they got back in the game.”

Iowa: The Hawkeyes looked as if they were on their way to a feel-good win after seeing their potential NCAA Tournament seeding go south following three straight losses and six in their previous 11 games. They didn’t get it.

Nebraska: As a great a win as it was, it probably doesn’t change anything for Miles. What started as a promising season went into free fall in January. Miles is 113-112 overall and 52-76 in seven years in the Big Ten.

Senior walk-on Johnny Trueblood, who played a total of 37 minutes over 11 games this season, was on the floor for 26 minutes and made some of the biggest plays late in the game. He stripped an inbound pass from Bohannon and dished the ball to Roby, whose dunk made it 70-65 with 1:32 left in regulation. He also swatted the ball away from Joe Wieskamp in the last 10 seconds of overtime to disrupt Iowa’s ability to get off a good last shot.

Iowa plays Illinois or Northwestern in the Big Ten Tournament on Thursday.

Nebraska plays Rutgers in the Big Ten Tournament on Wednesday.