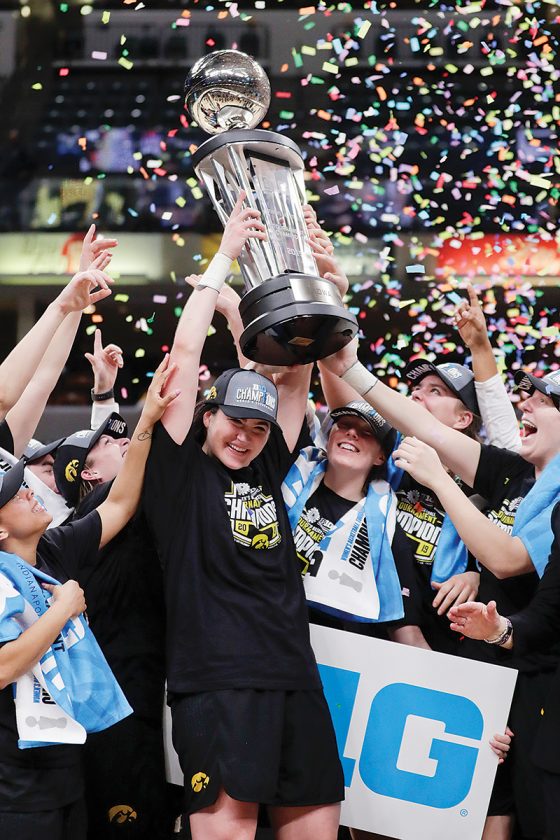 AP PHOTO - Iowa forward Megan Gustafson (10) celebrates with her teammates and the trophy following the Big Ten Conference tournament championship game against the Maryland on Sunday in Indianapolis. Gustafson, the tournament’s Most Outstanding Player, scored 45 points as Iowa defeated Maryland 90-76.

One by one, she batted each defender away.

Gustafson scored 26 points in the first half, finished with 45 and led No. 10 Iowa past No. 8 Maryland 90-76 on Sunday for the Hawkeyes’ first Big Ten Tournament title since 2001.

“This means everything,” said Gustafson, the overwhelming choice as the tourney’s Most Outstanding Player. “This was the only thing that I really cared about.”

Gustafson posted the second-highest single-game scoring total in tourney history, trailing only the 48 she had in last year’s quarterfinal loss to Minnesota, and her 17 baskets were second all-time, too, behind the 19 she made against the Gophers.

The two-time conference player of the year also grabbed 10 rebounds, went 11 of 14 from the free-throw line, drew 13 fouls and had three blocks — while posting the third-highest scoring total (95) in tournament history.

And now that she’s finally earned the title of Big Ten champion, the Hawkeyes (26-6) can focus on bigger goals after capturing their first tourney crown in 16 years — the longest gap between Big Ten Tournament titles since it became an annual event in 1995.

“Having confetti falling on you is the best feeling in the world,” Iowa guard Kathleen Doyle said. “I’m going to leave this (championship) hat on forever.”

Anyone scouting this game saw just how challenging it can be to defend Gustafson and her teammates.

The best the Terps could do was tie the score at 53 with 7:21 left in the third quarter when Kaila Charles scored on a layup. Charles finished with a career-high 36 points and nine rebounds.

Gustafson broke the tie with a layup, and then scored eight points in a decisive 12-4 quarter-closing run that gave Iowa a 69-60 lead.

Maryland (28-4) never recovered, losing for just the second time in the last 14 games — both to Iowa and largely because of Gustafson.

“We didn’t have an answer for her,” Maryland coach Brenda Frese said. “I’m not sure anyone in the country does.”

Iowa: The Hawkeyes have won five straight and 10 of 11. And while Gustafson’s dominance inside this weekend should be a major concern for whomever Iowa plays in the NCAA Tournament, the Hawkeyes also demonstrated they can use her presence to free up teammates. It could be a wicked postseason combination.

Maryland: For the second straight year, the Terrapins left Indianapolis empty-handed, but they still could be a handful in the NCAA tourney. They showed toughness to battle back and tie the game after Gustafson’s scorching start.

Iowa: Gustafson extended her own conference record for career double-doubles to 85 and her single-season school record to 31. … Davis added 14 points while Doyle had 13. … Makenzie Meyer and Alexis Sevillian each had five assists. … Hannah Stewart was the other Iowa player to be named to the all-tournament team.

Maryland: Owens was called for four fouls during a 4 1/2-minute stretch in the first half after Jones and Austin went to the bench in foul trouble. … Blair Watson scored eight points and was the only Terps player other than Charles with more than two baskets. … Maryland’s only losses in Big Ten tourney play have come in the last two title games. … Charles also was named to the all-tourney team along with Ali Patberg of Indiana and Stasha Carey of Rutgers.

The Hawkeyes had two injury scares.

First, Stewart left briefly in the first half when Austin rolled into her legs in front of the Iowa bench. She walked to the end of the court, where she composed herself before returning to the game.

Two minutes later, Davis stayed down after appearing to get hit in the face as Charles was driving to the basket. Davis also returned and finished the game.

Iowa: Must wait until next week to find out its NCAA Tournament destination.

Maryland: Will spend the next week fixing what went wrong before focusing on the NCAA Tournament.