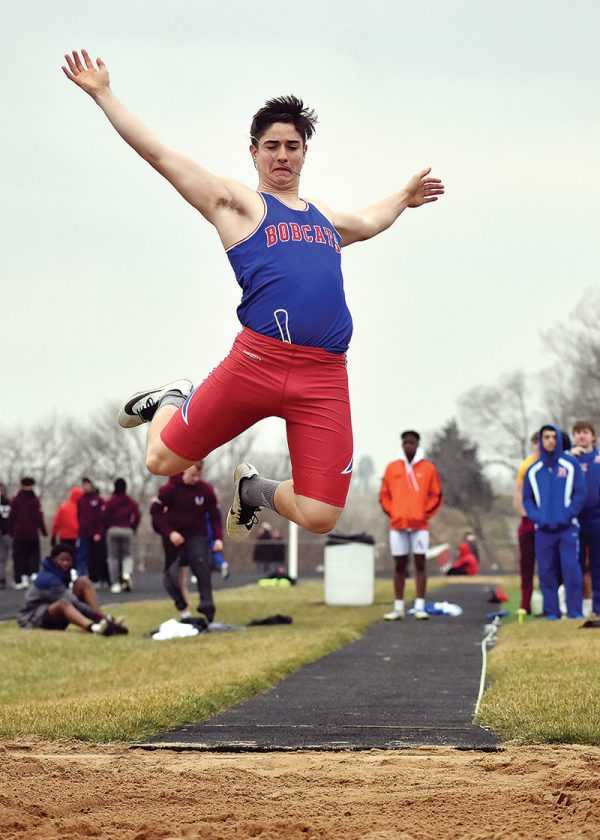 T-R PHOTO BY THORN COMPTON - Marshalltown’s Gabe Wyant launches toward the sandpit in the long jump event during the Bobcats’ home Kenny Dean Invite on Thursday. Wyant placed second in the long jump and MHS finished third in the team standings.

The Bobcats battled the adverse conditions and a tough field throughout the evening and when the dust settled they had earned third place on the team standings with a score of 101.5. Ames was the invite winner with 173.5 points and Des Moines Lincoln was second with 124.

“I thought we competed pretty well overall. We made a few mistakes here and there but I thought the effort was really solid,” Bacon said. “We had some things that really went in our favor, probably had an equal number of things that didn’t go as well as we hoped, but it’s early in the season yet. The season feels old when you get six weeks in from the start, but in terms of the number of meets we’ve run it’s still pretty young.”

One Bobcat finished on top of the standings in his event as senior Brent Johnson won the 400-meter dash in a time of 55.17 seconds, nearly a second faster than Noah Gallentine from BCLUW in second. 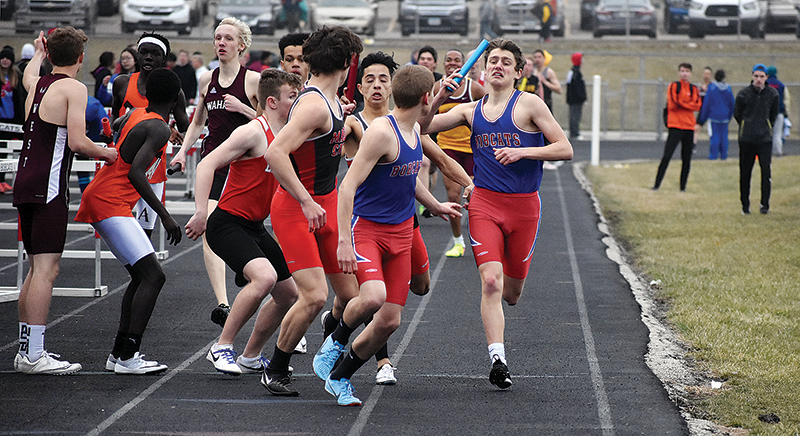 T-R PHOTO BY THORN COMPTON - Marshalltown senior Bennett O’Hare, behind right, stretches to deliver the baton to Marshall Weeden during the 4x800-meter relay on Thursday in the Kenny Dean Invite. The 4x800 team placed third in the race and the Bobcats took third in the meet.

“Considering the tough conditions we had, it was cold and windy, I’m just glad to come out here and get some points for our team,” Johnson said of winning an event in his final home meet.

Bacon said Johnson winning the 400 was fantastic, but he also had great contributions in the 4×800 and 4×400 relays that both placed third.

“He had a big night, it’s hard to run against high-level competition in the sprints especially,” Bacon said of Dean. “It was a big workout night for him.” 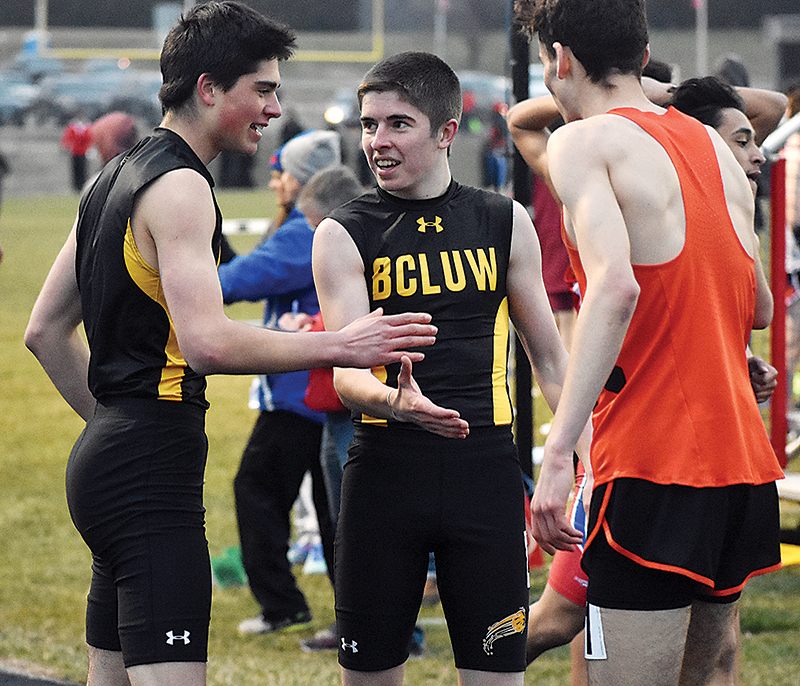 T-R PHOTO BY THORN COMPTON - BCLUW runners Caleb Silver, middle, and Henry Kaisand, left, talk with a competitor after running the 800-meter race on Thursday in the Kenney Dean Invite. Silver placed fourth in the 800 and the Comets took fourth in the team standings.

Bennett O’Hare got to see his first action of the spring after suffering a knee injury during basketball season, and despite his ailments he still made a big impact. O’Hare placed second in the 800 with a 2:08.51, and he ran in the 4×400 relay and led off the 4×800 relay that placed third with an 8:44.69.

“He obviously is behind the eight-ball when it comes to workouts. This might be his fourth weeks he’s been running,” Bacon said. “People don’t realize how hard it is to run an 800, then to be able to step out there and run a 2:08 or 2:09 because you are just that good and know how to do it, once we get him in shape he will probably start to whittle away at that time. It may not be what we had hoped for this year before the knee injury, but I know what thing about Bennett and that’s he’s going to race really hard for us. I’m not too worried about that.”

Marshalltown also racked up quite a few points in the field events. Gabe Wyant took second in the long jump with a distance of 19 feet, 8 3/4 inches, Dwight Joar was third in the high jump with a vault of 5-6, and Jordan Anderson placed third in the shot put with a heave of 45-1 and fourth in the discus after tossing a 130-8.

“We’ve been pretty steady with our field events,” Bacon said. “It didn’t look so good in the high jump but Dwight Joar has really come around and as a matter of fact I’m starting to see a lot of our sophomores step up a little bit, and we are going to need that because we are a little thin with the upperclassmen. This group has always had some talent, and I think we are starting to see them put a little work ethic with that and it’s starting to pay some dividends.”

While the host-Bobcats finished in third, the BCLUW boys were hot on their heels in fourth place on the team standings with 87 points. 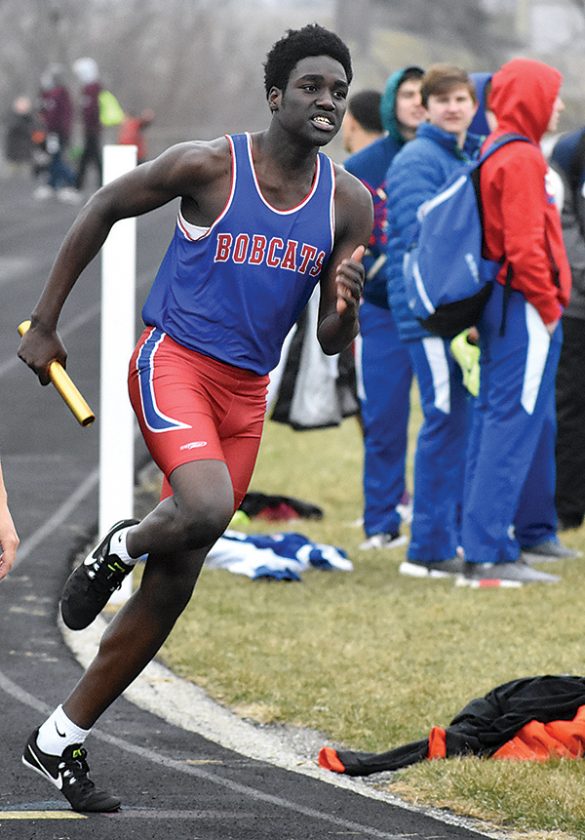 The Comets were the only non-Class 4A team in attendance, and head coach Anthony Jahr said the fact that his team beat out five 4A teams on the scoreboard was a great experience.

“Getting to compete with guys like this is something we don’t do ever, except maybe indoors,” he said. “It’s really cool for our guys to be able to be on the same competition field as them because in a lot of sports you can’t compete with schools this much bigger, but in track you can. It’s one of those individual sports where you can really compete regardless of your school size, and we did an awesome job tonight.”

Once again in the spotlight for BCLUW was senior Jack Garber, who won all three events he competed in. Garber took first in the 100 with an 11.61, and he won the 110 high hurdles in 15.12, more than a second faster than second place.

In the shuttle hurdle, Garber combined with Coby Willett, Koty Kruse and Neifer Ralston to take first with a season-best time of 1:02.7.

Jahr said at this point all of that success is just par for the course for Garber. 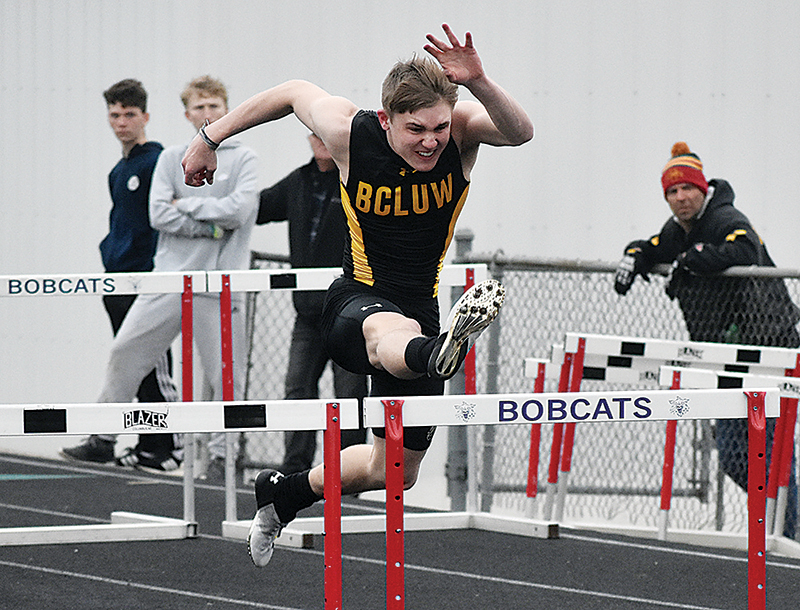 “He did Jack things,” Jahr said with a laugh. “He’s very confident and very skilled at what he does. He makes it look easy, but don’t let that fool you because he puts in huge amounts of work and everything he does radiates throughout our team. Caleb Silver is the same way, how they get after it day in and day out drives everybody to do their best and we keep doing that every night so I am really proud of them.”

Silver also had a good night, though he didn’t run his usual schedule. Silver started the day with a second-place finish in the 3,200 in a time of 10:21.47, then he finished fourth in the 800 with a 2:11.29. Silver also anchored the distance medley relay that took third for the Comets with a 3:54.86, and Jahr said he likes to get Silver involved in other places than the long distances.

“With those distance guys, we can’t be pounding those same races two or three times a week,” he said. “From here on out it will be kind of switching up where we put him, and he likes doing that too. He even told me, ‘hey, can I try running a 400 this year?’ and I told him we’ll try it because I like to give his legs a break.”

Aside from Garber, the other event winner for BCLUW was Ralston in the 400, who took top honors with a season-best 57.13. Jahr said Ralston’s development could be a big key down the stretch this track season.

“As Neifer is getting better and better, he just makes us that much better,” Jahr said. “He is someone who is going to be huge for our success moving forward because he’s in some tough events. He runs the open 400, he runs the 400 lows, and those are just gritty events. Couple that with running a 4×400 after running the 400 lows, there’s not a whole lot of guys that can do that and he’s definitely one of them.”

Marshalltown returns to the oval on Monday when it travels to compete at Fort Dodge, while the Comets are next in action also on Monday at East Marshall.