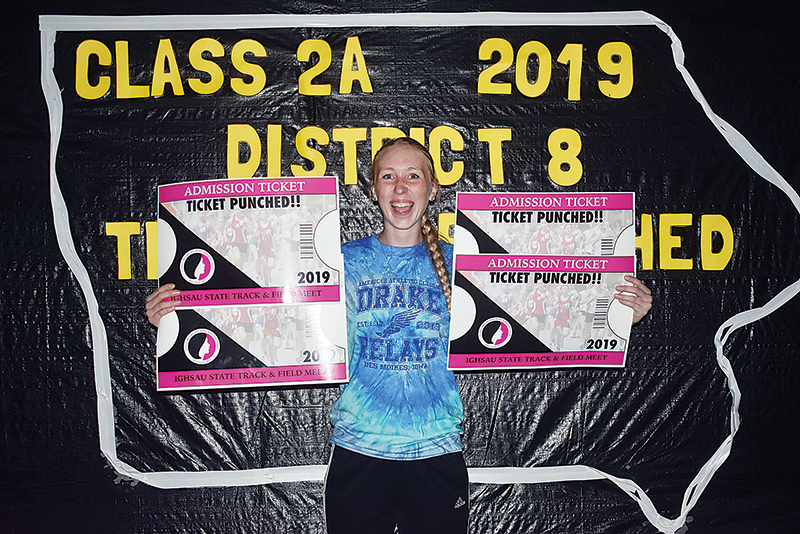 T-R PHOTO BY THORN COMPTON - East Marshall senior Melinda Puumala poses with her four admission tickets for the Class 2A State Track and Field Championships she earned Friday at the state-qualifying meet in State Center. Puumala is seeded second in the 400-meter hurdles and the long jump.

LE GRAND — East Marshall senior Melinda Puumala already knew her ticket was punched four times for the Class 2A State Track and Field Championships after going 4-for-4 in her events at the district meet on Friday, but she didn’t know where her efforts had landed her on the overall seeding list.

When the full qualifier list and seedings were released on Saturday, Puumala quickly opened up the document and found her events, and what she found honestly shocked her.

“On Saturday I was more worried about where I am going to be among everybody else in 2A, so when it came out and I saw I was two, two, three and six, I just kind of cheered a little bit in my living room,” she said. “It was a nice victory cheer after that.”

Puumala is seeded second in the 400-meter hurdles and long jump, third in the 100 and sixth in the 100 hurdles. That’s an impressive list of seedings for anyone, but considering what Puumala has gone through to get to this position, it makes her accomplishments almost baffling.

“In cross country I was thinking, ‘just get through the season, it will be better in track,’ but in track it wasn’t very much better,” she said.

Puumala had dealt with asthma throughout her competitive career but her lung issues prompted her to get checked out again.

“This past year I went to the doctor just to see if it was asthma, and I do have asthma, but I am also kind of allergic to the Earth,” she said. “I am allergic to grass, trees, weeds, smoke, dust, basically anything.”

In her short-distance events and the long jump her breathing isn’t an issue, but in the 400 hurdles, her strongest event, Puumala starts to run into problems.

It also helps to have her new diagnosis and the proper equipment to treat it, she said.

“I got an inhaler and I don’t think about it, but in the 400 hurdles that’s when it hits me,” Puumala said. “When I’m done I just yell to one of my teammates, if I can yell at that point, and they get my inhaler so I can breathe. If I don’t have my inhaler I just double over on the track and curl up into a ball.”

Even with the diagnosis down, Puumala’s skyrocket into the stratosphere of the top of 2A in her events actually forced East Marshall head girls track coach Trent Taylor to pick his star senior’s brain.

“We actually had a conversation, this was probably midseason after a couple of records were broken, and I sat her down and said, ‘I just need to hear from you what’s happening. What’s different? Have you done something different? Are you not experiencing some of the physical pain that you’ve had in the past?'” Taylor said. “You see this in athletes when something finally clicks in their mind and they finally understand that they’ve underachieved. Even though they’ve been great athletes, in her case for three years, they realize, ‘this isn’t what I want, I want this.'”

Puumala shattered the old 400 hurdle record by more than four seconds, and she is now the record holder in the 100 hurdles.

She was a state competitor in both races a year ago, placing 15th in the 400 hurdles and 16th in the 100 hurdles, but this year she said she’s got a lot more confidence in her abilities.

“Last year I ran the 100 hurdles and I ran against a lot of good competitors, but now my time is a lot lower than it was last year I think I have a good chance of actually competing with them this year rather than just being there,” she said.

While Puumala is an excellent hurdler, her favorite event and the one she has the most experience competing at a high level in is the long jump. This will be the fourth time Puumala has competed in the long jump at state, with her best placing coming last year when she finished in 14th.

She enters her senior season as the second-seeded vaulter with her district jump of 16 feet, 11 1/4 inches, and she said finally getting to jump in the second flight will be a new experience.

Puumala has two school records and is in striking distance of two more, as she is behind Megan Baker’s state-winning jump of 17-8 1/2 in 2007 and Jena Diers’ 12.63 in the 100. Taylor said it wouldn’t shock him if she were to hit either mark.

“She is now being compared to some of the better track athletes to come through here, and that is a tribute to her,” he said.

Taylor also had to grow with Puumala through the years, as he said what she is now at the end of her career is a far cry from how she entered.

“We are talking about a freshman and sophomore that was running 76’s in the 400 hurdles and now she’s running almost 65-flat,” he said. “She came into high school as a 1,500 runner, one of the things I really had to do — and I’ll just say it, I got lucky — I had to break that mold and get away from pigeon-holing her into one event.”

There is no mincing words for Puumala on her goals.

“I’m going for a state championship, that’s my ultimate goal. I think I have a good chance at two or three of them, I really do,” she said. “In the 100-meter dash, the girl in front of me is only nine hundredths of a second faster than me, so I think I have a really good shot in that considering my times have been coming down throughout the season. The 400 hurdles, if I can just stick with [top qualifier] Mikayla Turek from Unity Christian, I think I have a good shot at that as well. In the long jump I just have to show up and do what I need to do.”

Taylor said that focus Puumala has on winning titles prompted him not to run her in a relay to attempt a qualification there, just because he knows she has the potential for a truly special final state meet.

“We’re not going to just be happy to qualify, our mindset is on how many points she can score down there,” he said. “We haven’t had a state champion since 2007, and we would like to get that started again.”

This will be a final hurrah for Puumala, too, as she is not going to continue her sports career once she graduates.

“I’m not going to college next year for any sports, so I really want to wrap it up in a neat little bow and just end strong,” she said. “I am really going for four top-8 finishes, and if I get four top-8 finishes I am going to be ecstatic. If not, I still went in all four of my events. I proved myself at districts, I just have to do it at state now.”

Puumala starts her state journey on Thursday at Drake Stadium with the long jump and 100 preliminary races, starting at 11:30 a.m. and 12:50 p.m, respectively.