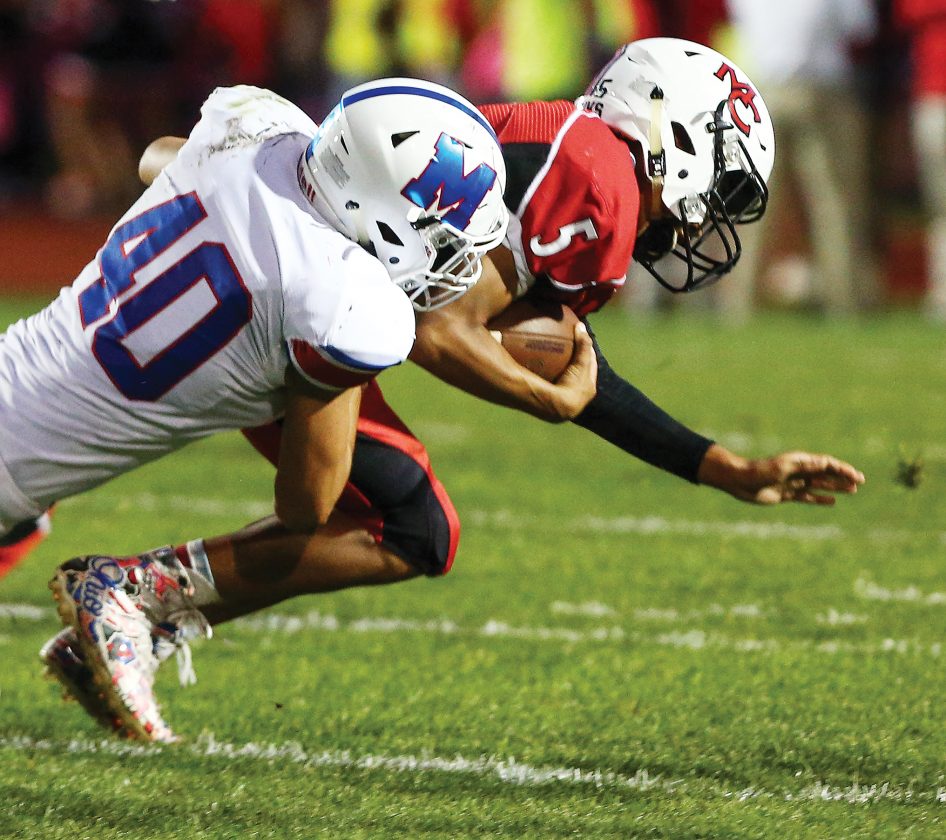 MASON CITY — For the third time in as many games, the Marshalltown defense delivered.

The Bobcat football team didn’t allow the Mason City offense to score and defeated the Mohawks 27-7 on Friday night at Mohawk Stadium, improving to 3-0 for the second-straight season.

Marshalltown made its 27-7 halftime lead last the duration as neither team scored in the second half, and Mason City (0-3) was held to 13 points or fewer for the third time this season.

“Definitely defensively I thought our guys played real tough,” said MHS head coach Adam Goodvin. “We didn’t allow an offensive touchdown but we had a brain fart on special teams and we can’t have that.”

Mason City’s lone touchdown came on the first play of the second quarter with Marshalltown protecting a 14-0 lead. Carter Thomas came through the line, blocked the Kabba Pins punt and recovered the loose ball to cut the Mohawks’ deficit in half.

The Bobcats scored the last 13 points of the game, however, with two more touchdowns in the second quarter. Pins punched the ball across the goal line from 6 yards out, but his ensuing extra-point kick was blocked to make it 20-7.

Justice Richardson made a special teams play of his own for MHS, blocking a Mason City punt with 1:59 to go in the half and giving the Bobcats the ball on the Mohawks’ 30-yard-line. Less than a minute later, Carson Beals caught a pass from quarterback Brendan Bates and ran it in from nine yards out for the game’s final score.

Mason City had a touchdown pass called back on a penalty in the third quarter, and neither team threatened much to score the rest of the half.

“[Mason City] gave us different looks front-wise, which I think was giving our guys fits so credit to them, but we’ve got to get better this week,” said Goodvin. “When we did get something going in the second half we shot ourselves in the foot. It’s about how we respond to adversity and I think we’ve got to improve with that.”

Dwight Joar intercepted Mason City’s first pass attempt of the game for the Bobcat defense, setting up Marshalltown with a short field for its first score. Bates hooked up with Carson Williams on a 31-yard scoring strike on third-and-9 to kick off the eventual Bobcat victory, and the same two players connected the next time the Bobcats had the ball. This time a 21-yard completion pushed Marshalltown’s lead to 14-0.

“I was very proud of [Bates] and his decision-making in the first half,” Goodvin said. “In the second half we didn’t really get any momentum going running the ball.”

Having allowed no more than two offensive touchdowns in the first two games, the Bobcats kept Mason City’s offensive unit out of the end zone for the duration. Goodvin credited his defensive line in being prepared to stop the Mohawks’ diminutive sophomore quarterback James Jennings, a 5-foot-7, 145-pound sophomore.

“Our defensive line was key tonight,” he said. “[Jennings] is a scrambler, he’s a very athletic kid. For the most part our guys did a great job.”

Beals led the Marshalltown offense with 79 rushing yards on eight carries to go with his 9-yard touchdown reception. No other statistics were available as of press time.

Marshalltown comes back home to Leonard Cole Field for its next two games, starting with a Sept. 20 Homecoming clash with archrival Ames.