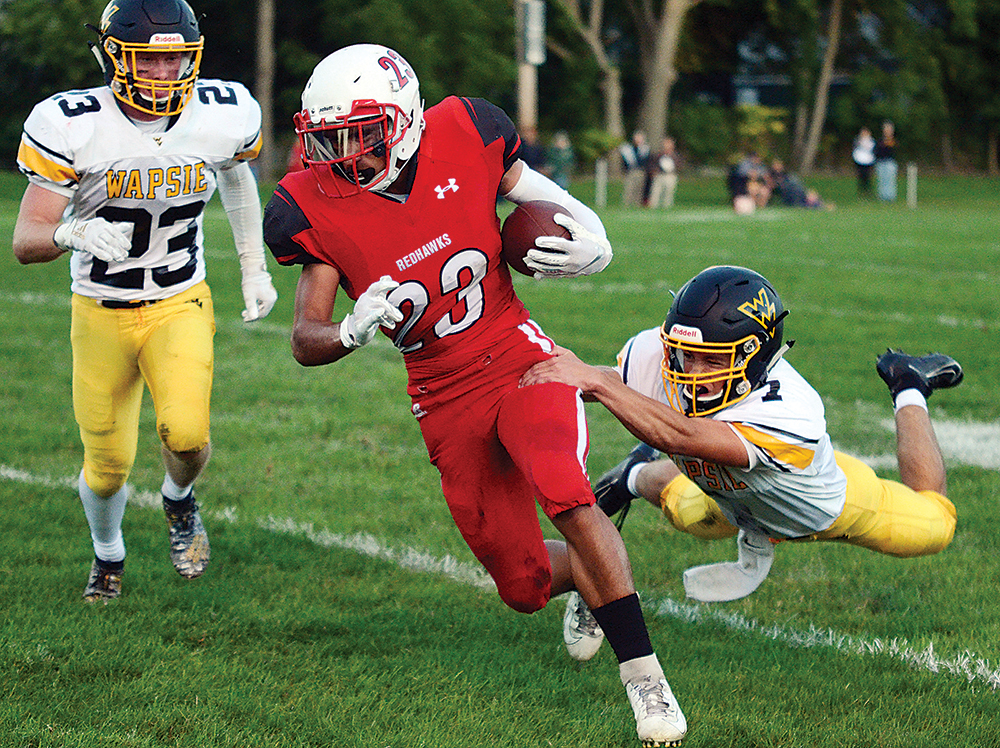 T-R PHOTO BY ANDREW ABADIE - North Tama junior running back Noah Weber, center, takes Wapsie Valley’s Kobe Risse (7) for a ride during the first half of Friday’s Class A District 7 showdown between ranked football teams in Traer. The No. 6 Redhawks knocked off the No. 4 Warriors, 13-7.

TRAER — Trailing 7-0 at the end of the first quarter, the No. 6 North Tama football team changed its gameplan and called on its run game to take control in a 13-7 comeback win over No. 4 Wapsie Valley in the Class A District 7 opener on Friday night.

“What we had planned wasn’t working right away,” running back Zach Greiner said. “Halfway through the game we pretty much figured we could run it down their throats the whole game and that’s exactly what we did.”

Wapsie Valley (2-1) had early control of the game in the first quarter. The Warriors accumulated 51 rushing yards and took away North Tama’s passing game. Wapsie Valley had quickly diminished North Tama’s original game plan which led to a 7-0 deficit after running back Trevor Sauebrei scored on a 4-yard run.

However, North Tama flipped the script on Wapsie Valley as the Redhawks used their run game to not only develop a consistent offense but also kept Wapsie Valley’s offense off the field. For head coach, Tom McDermott the ball-control offense that the Redhawks implemented showed the physicality of his team.

“It also showed that we are pretty physical,” McDermott said. “We are pretty tough and that we can run the ball right at anybody. That’s a tremendous defense that they have. [They are] well-coached and very physical and to just stay at them like that was great.” 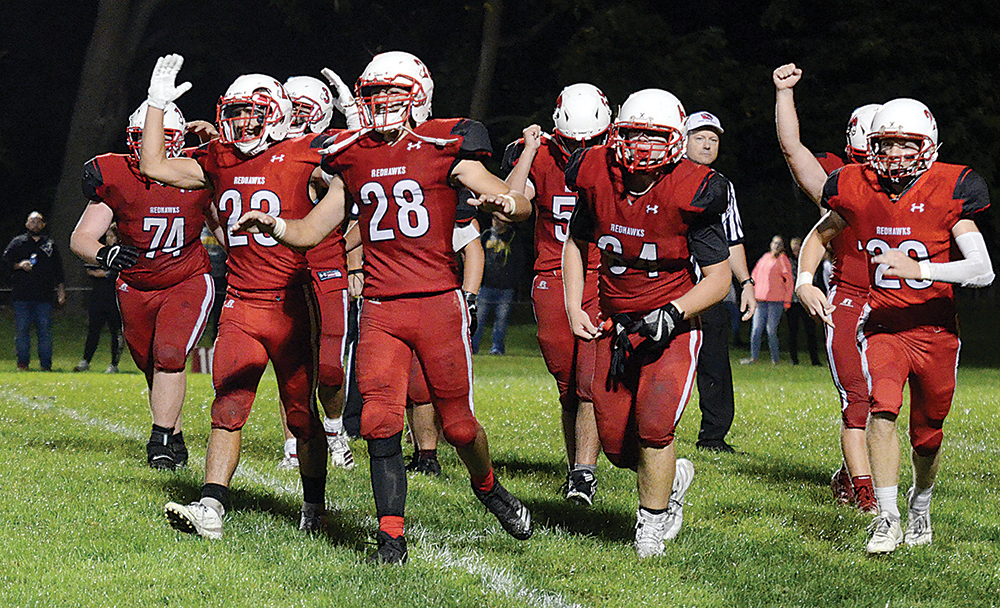 T-R PHOTO BY ANDREW ABADIE - Members of the North Tama football team celebrate as they leave the field with a 13-7 victory over Wapsie Valley in a showdown between ranked Class A District 7 football teams on Friday night in Traer.

At the start of the second half, North Tama put together a 6-minute, 58-second drive that was capped off by a 2-yard touchdown run from Greiner.

“They tried to tell me it wasn’t in right away but I stretched the ball across,” Greiner said. “It was just an awesome block by our offensive line. They just got me enough space to punch it in.”

Greiner finished the night with 99 yards on 23 carries and a touchdown.

While North Tama’s offense helped control the Warrior defense, it was the Redhawk defense’s ability that also made a key adjustment by stopping Wapsie Valley’s run game. At the end of the first quarter, the Warriors had quickly accumulated 51 rushing yards. However, the defense took the run game away forcing 10 different plays to end behind the line of scrimmage. At the same time, this hurt Wapsie Valley’s passing game which finished the night 7-for-16 with an interception.

“Sauerbrei is a great running back,” Greiner said. “He gave us problems in that first quarter. We got containment on him and our defensive tackles stopped really got him in a box. We knew our linebackers and our defensive linemen could take care of him. The passing game was a big question mark because they have a very good passing game and they do a very good job at it. I think we held them in check good. Our goal was no big plays and that’s exactly what we got.” 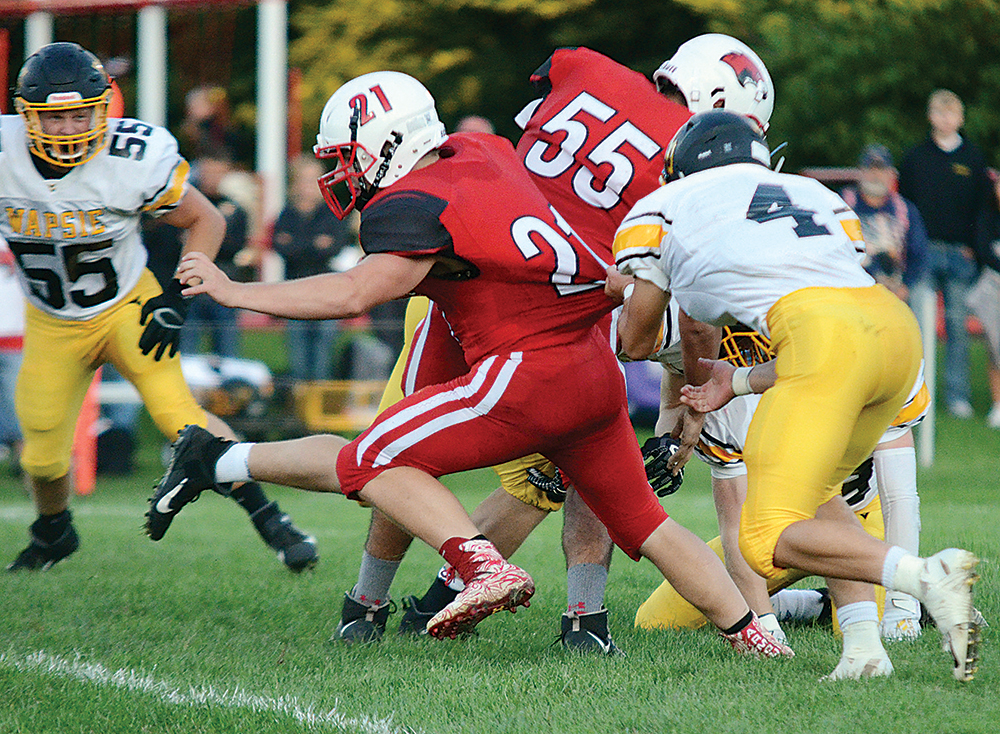 Another key role in the offense’s run game success according to McDermott was quarterback Skyler Staker, who totaled 85 yards on nine carries

“Skylar blocking in front of them [was a difference],” McDermott said. “He said at halftime ‘You guys just follow me. We’ll get it done.’ That’s senior leadership. The quarterback is kind of a glory position and he is willing to be a blocking back to get us a victory. That tells you the kind of guy he is and what it means to be a team player.”

North Tama’s formula for success culminated in the final minutes of the fourth quarter. Running back Noah Weber found the end zone and gave the Redhawks the lead on a 4-yard touchdown run. Weber finished the night with nine carries going for 51 yards before a late injury took him out of the game. 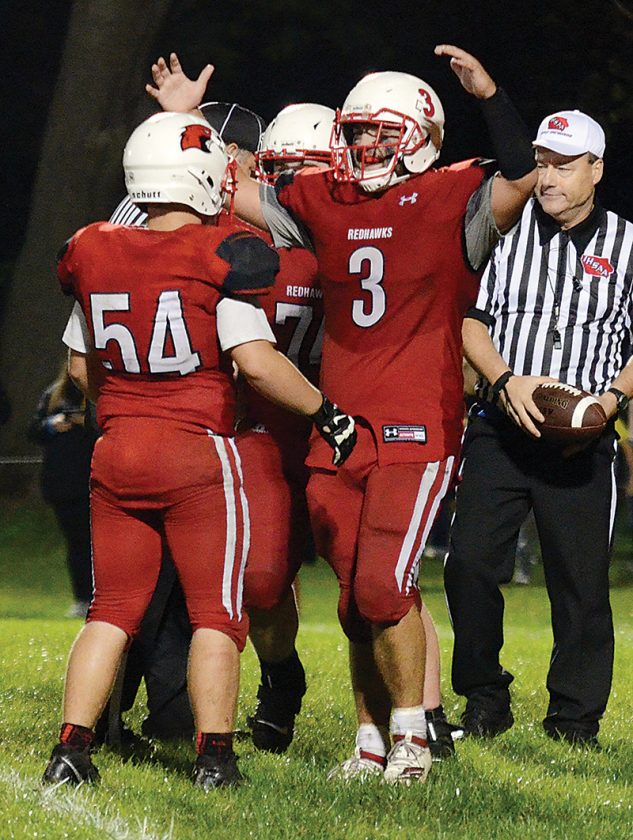 By the end of the night, Wapsie Valley managed to only run 33 plays compared to North Tama’s 51.

“Hats off to the coaches for making that decision,” Greiner said. “Me and Weber got it done tonight. [The work load] wasn’t expected at all. Noah went down halfway through the game so they started giving me the ball more so it was a great job by our offensive line tonight.”

Looking ahead North Tama (3-0) will go on the road to face Hudson next Friday.

“It doesn’t get much easier from here,” McDermott said. “This was extremely important as highly ranked as they are and for us to come back after we struggled against a Lisbon team that hasn’t been real strong. We get to play Hudson next, the defending state champion, and then East Buchanan and Grundy Center. We have to keep going. It’s just the start of this four-week stretch that is tough as any for Class A so we have to keep going.” 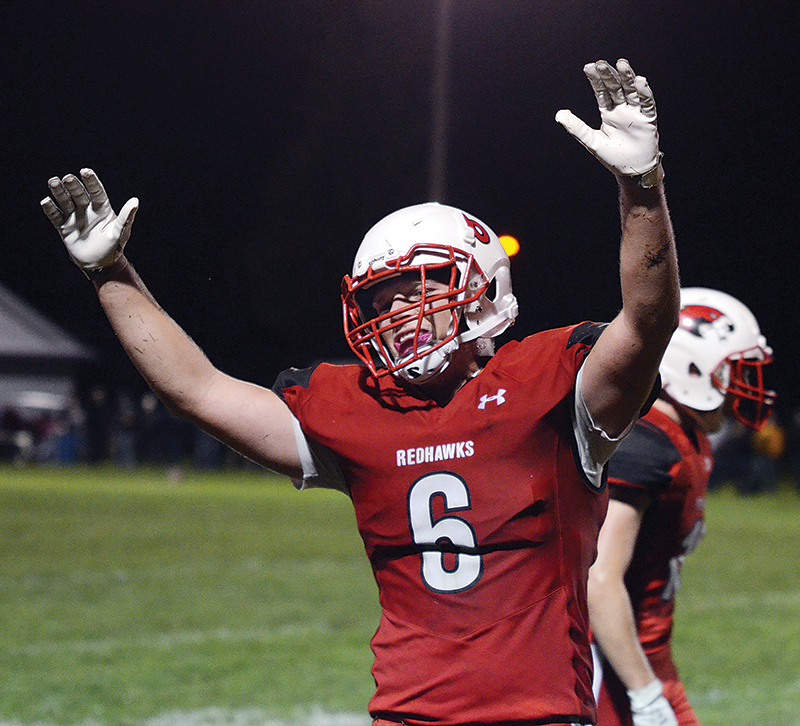