Davis in, ’Cats out 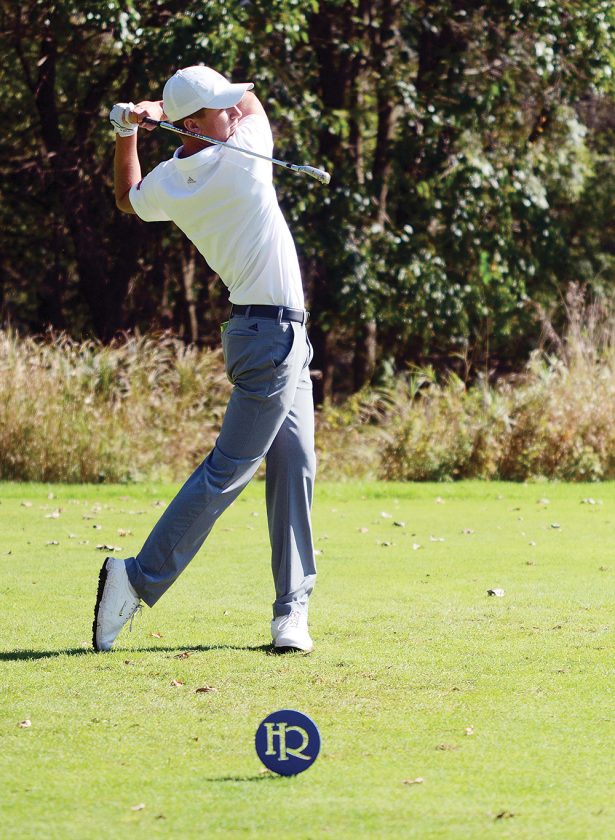 T-R PHOTO BY ANDREW ABADIE - Marshalltown senior Cole Davis follows through on his tee shot on the 16th hole at Hunters Ridge Golf Course during Monday’s Class 4A district meet in Marion.

Cole Davis extended Marshalltown’s four-year streak of qualifying for the state meet. At the same time, this will also mark the first time since 2016 the Marshalltown team failed to earn a spot at state.

Davis, however, thought that he had missed out on making the state meet and was sure that his high school career ended on Monday.

“I’m in complete shock,” Davis said. “Mentally, I thought there is no chance that I’ll play in another high school meet. I knew we didn’t make it as a team. I didn’t play very well. I figured somebody snuck in there in front of me.

“It means a lot [to qualify for state]. I wanted that one last chance of getting that individual title. We have a history of a lot of good players and a lot of good teams. For me to add to that would be awesome.” 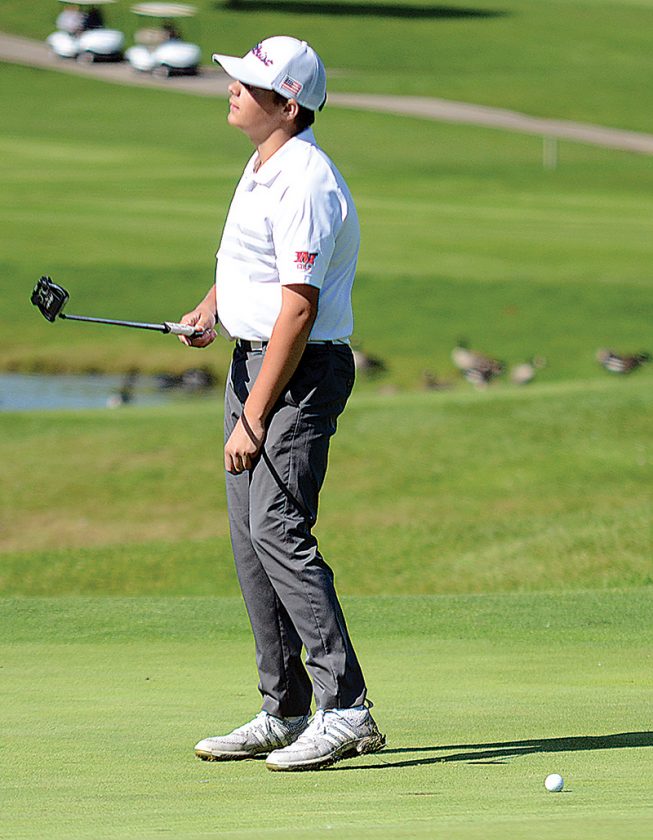 T-R PHOTO BY ANDREW ABADIE - Marshalltown sophomore Colin Schmit reacts after his putt lipped out on the 12th green during his round Monday at the Class 4A district meet at Hunters Ridge Golf Course in Marion.

Davis’ 5-over-par round of 77 tied him for sixth place with fellow individual qualifier Davis Stelzer from Western Dubuque.

According to Marshalltown head coach Lucas Johnson, holes 15-to-18 were the toughest ones for the Bobcats to overcome.

“For stretches today I thought we did have our best,” Johnson said. “When we got to the stretch of 15-16-17, it just kind of took its toll on us. We got there we had a super-long wait at the tee box at 15 — at one point we had four groups there. Just having to wait 25 minutes to hit a shot is not easy, especially that hole. It’s not an excuse by any means.”

Davis was 2-over on those final four holes and as a group, the Bobcats’ four scoring golfers were a combined 12-over.

“Those are some hard finishing holes,” Davis said. “It was just so wet out there today. It was hard to get anything to roll. I didn’t play very well and I couldn’t get anything going.” 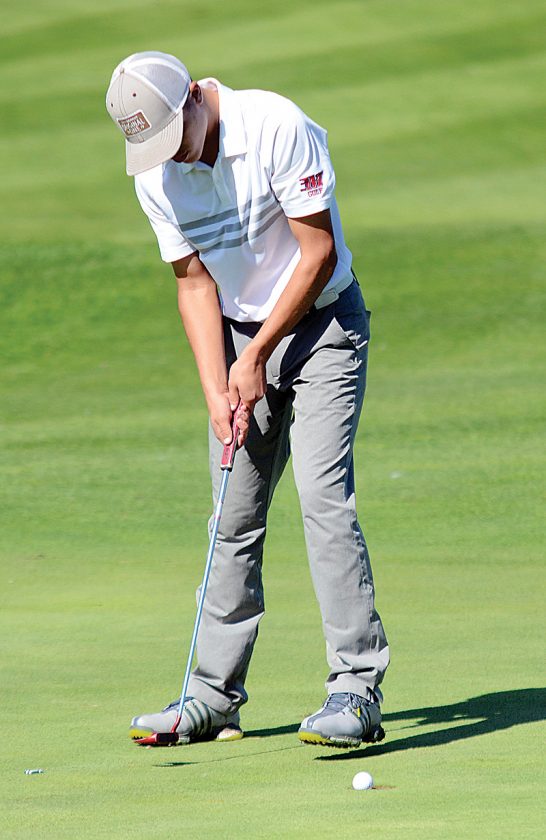 “Hopefully, I can just put this behind me. Have a good week of practice, be ready on Friday and go get that title.”

As a team, Marshalltown carded 337 for a sixth-place finish. However, Grant Greazel who shot a 78, was disqualified due to a scorecard error that would have placed the Bobcats in third place but losing in a tie-breaker.

“Obviously, it was super-close down at the end,” Johnson said. “When got into the stretch of 16-17-18 we knew we had a chance. It wasn’t through a lack of effort from our guys. We just didn’t execute the shots that we needed to hit down the stretch. We were right there. When it comes down at the end of the day if you factor out the disqualification we tied for the number. That shows our guys were right there. We knew it was a tough district and we knew weren’t going to be able to coast through.”

Colin Schmit carded an 81 while Mason Reid carded an 85. Rounding out the score for the Bobcats was Owen Chaloupek who shot a 94.

Winning the meet was Cedar Falls with a score of 312. Cedar Rapids Washington and Cedar Rapids Kennedy both earned qualifying spots with team scores of 315 and 321, respectively. 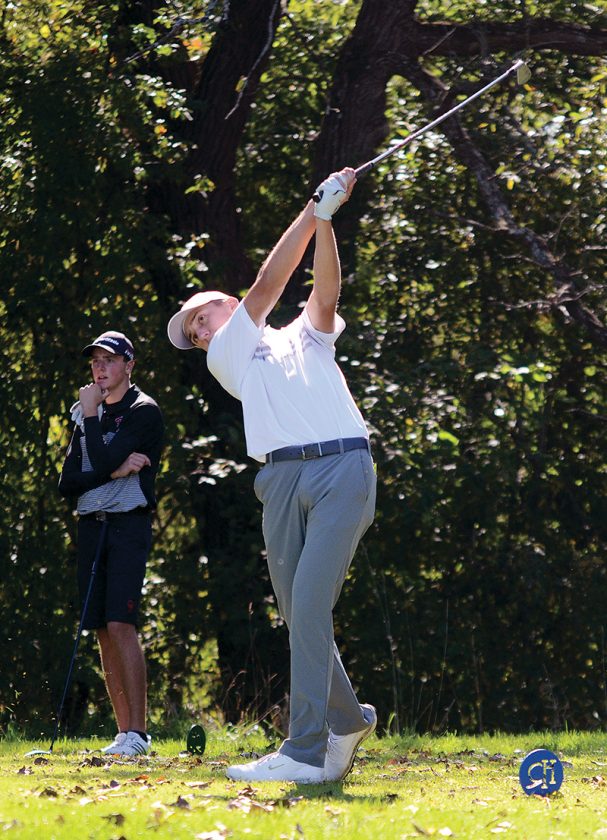 Davis will now prepare for the two-day state meet at the Tournament Club of Iowa in Polk City starting on Friday.

“TCI is a course that is going to separate the best players in the state,” Johnson said. “You can’t get around there as a pretender and [Davis] is someone who will go in there and know those shots that he needs to hit. He didn’t have a birdie all day. That something I’m not used to seeing. I don’t know if I’ve seen that all year. His scoring clubs were not where they needed to be.”

“Cole would be the first to admit he didn’t have his A-game today [but] he is one of the best players in the state for a reason. I thought it was fitting that he was going to close out his senior season at the state tournament which is a tournament that I know [and] feel like that he can beat anybody. For him, that’s a great accomplishment. He’ll walk in there and be a favorite to contend for the title.”

T-R PHOTO BY ANDREW ABADIE – Marshalltown senior Cole Davis follows through on his tee shot on the 16th hole at Hunters Ridge Golf Course during Monday’s Class 4A district meet in Marion.

T-R PHOTO BY ANDREW ABADIE – Marshalltown sophomore Colin Schmit reacts after his putt lipped out on the 12th green during his round Monday at the Class 4A district meet at Hunters Ridge Golf Course in Marion.