Gauntlet persists as Bobcats prep for No. 7 Southeast Polk 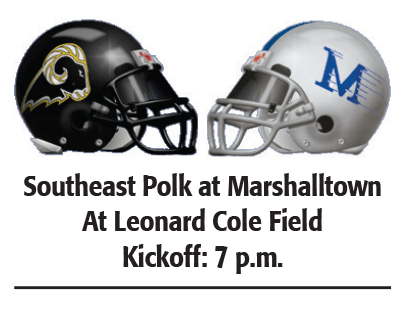 The Marshalltown football team will return home this week and face Southeast Polk in a Class 4A District 2 matchup that could keep the Bobcats’ playoff hopes alive.

“They are a good football team,” Marshalltown head coach Adam Goodvin said. “We’re excited to be back home and play in front of our fans and on our home field. It’s Senior Night so it should be a good one.

“We know what we have got to do to put ourselves in the best position to hopefully get in [the playoffs] and the rest will take care of itself. We have to do the same old, same old stuff. We have got to continue to do better. Just make sure that everyone is locked in. Our focus has got to be on point in every single moment of practice all week.”

On offense, Southeast Polk has averaged 34 points per game. The Rams have a well-distributed offense but mainly rely on their ground game to set up the passing attack.

At the helm of the Rams’ offense is running back Deveyon Montgomery, who has dashed for 667 yards and 10 touchdowns on the season.

“They have got Deveyon Montgomery, who’s got the majority of their carries,” Goodvin said. “He’s got good speed. We saw a little bit of him last year. I would say he can do a little bit of everything. He’s not more power than speed or more speed than power. He’s a talented kid. It’ll be a fun challenge for us defensively.”

The Rams also have three other running backs with two touchdowns as Titus Christiansen is the team’s second-leading rusher with 256 yards.

“We saw [Christiansen] on film that he’s got good speed. They also have a couple of talented receivers on the outside as well,” Goodvin said. “They do a pretty good job of distributing the ball as well.”

At quarterback, Southeast Polk has sophomore Jaxon Dailey, who has thrown for 965 yards, eight touchdowns and three interceptions with a 53.4 completion percentage.

“They’ve got a good quarterback this year,” Goodvin said. “A sophomore kid who is also very talented. He’s got good size. You can tell he is a smart kid and well-coached. He’ll occasionally run the ball but not a whole lot. He’s got the size, I think he is 6-2 and is left-handed. He’s a talented kid and playing with a lot of confidence right now. It’s going to take a high-end [effort] on our part to slow them down.”

Dailey has two primary targets between Fred Johnson, who has 17 catches for 332 yards and five touchdowns, and Isaiah Wagner, who has 20 catches, 315 yards and two touchdowns.

Dailey also targets Jay Combs, who has 16 catches for 138 yards.

“Wagner also returns kicks and he has some speed,” Goodvin said. “Our defensive backs are up for the challenge. We told them on Monday that it’s going to be a dogfight. You have to step up and play our best game [because] it’s our only option right now.”

On kickoffs, Wagner has one return touchdown and averages 24.9 yards per return.

Defensively, the Rams have given up 18 points per game while posting two shutouts and forcing 14 turnovers on the season.

“They mix things up a little bit,” Goodvin said. “They’ll switch fronts and bring pressure from different angles but it’s nothing that we haven’t seen this year. I think being in Week 8 now, we have seen almost everything there is. They have some talented kids. They lost a couple of stud defense ends from last year but they replaced them with some good-sized kids that are working their tails off from what we can tell on film. They have got some good-sized and speed. They play well and are well-coached.”

The Bobcats will host Southeast Polk on Friday at Leonard Cole Field.

“It comes down to attention to detail. We have talked about it a lot but we have got to continue to prove it with the little things. That starts with knowing what we have to do before each play and then winning that individual play and that’s what we are really pressing.”