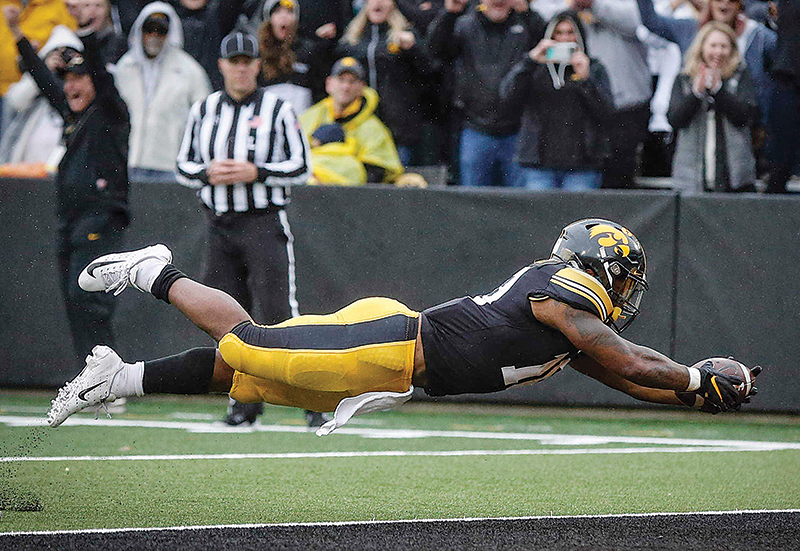 AP PHOTO - Iowa junior running back Mekhi Sargent dives into the end zone for a touchdown in the fourth quarter of Saturday’s Big Ten Conference football game against Purdue at Kinnick Stadium in Iowa City.

IOWA CITY — Iowa’s defense might be as good as any in America.

The Hawkeyes’ offense is lagging way behind though, and that inconsistency is threatening to submarine their season.

Mekhi Sargent ran for a 14-yard score with 2:16 left and 23rd-ranked Iowa held off Purdue 26-20 on Saturday, snapping a two-game losing streak.

Tyler Goodson scored his first career touchdown from a yard out and Keith Duncan kicked four field goals for the Hawkeyes (5-2, 2-2 Big Ten), who also broke a two-game skid against the Boilermakers (2-5, 1-3).

Purdue made the Hawkeyes — who entered the game as a 17-point favorite — earn this one.

The Boilermakers cut it to 19-13 on J.D. Dellinger’s 36-yard field goal with 2:59 left. Purdue was assessed a personal foul after squibbing the ensuing kickoff to midfield, though, and runs of 21 and 14 yards by Sargent gave the Hawkeyes the cushion they’d been looking for all day.

Jack Plummer’s 1-yard TD pass to Payne Durham with 24 seconds left made Purdue the first team this season to score 20 on the Hawkeyes. But Iowa secured the onside kick and survived — and Wisconsin’s stunning loss at Illinois gave an unexpected boost to the Hawkeyes’ hopes in the West Division race.

David Bell caught 13 passes for 197 yards and a touchdown for Purdue, which ran for just 33 yards after entering the day 129th out of 130 teams in rushing.

“We just have to worry about getting better, getting more efficient,” Purdue coach Jeff Brohm said.

“Of course, we’ve rather kick extra points,” Duncan said. “But it’s fun to go get some field goals.”

Iowa: The Hawkeyes’ offense might be even more hampered moving forward. Receiver Brandon Smith was carried off by his teammates in the fourth quarter with what appeared to be a right leg injury. Smith headed to the locker room on crutches after catching nine balls for 106 yards. “So far it’s positive,” Ferentz said, adding it might just be a bone bruise.

Purdue: The Boilermakers might have pulled off the upset if not for two first-half turnovers deep in Iowa territory. Purdue likely won’t make a bowl in 2019, but the prospect of star Rondale Moore and Bell playing together should frighten Big Ten West defensive coordinators. Plummer wasn’t bad either, finishing 30 of 50 for 327 yards. “I think we showed some fight,” Brohm said.

Stanley threw a ball that slipped through Goodson’s hands and into Purdue cornerback Dedrick Mackey’s hands early in the fourth quarter. He returned it to Iowa’s 8, but the Hawkeyes held the Boilermakers to three points. Michael Sleep-Dalton bailed out the offense as well a few minutes later with a 63-yard punt that put Purdue on its own 21.

Purdue, down 9-7, was threatening to score on the first possession of the second half when Iowa forced a long third-down try. Sophomore Riley Moss picked off Plummer at the Boilers’ 21. Goodson caught a 20-yard pass on the first play of Iowa’s subsequent drive, which ended with Goodson’s touchdown run.

Later in the third, Stanley was flushed from the pocket — and Purdue appeared to have all his receivers covered. But a scrambling Stanley found Smith downfield for a 30-yard completion that put Iowa on Purdue’s 37. That set up Duncan’s fourth field goal, a 38-yarder off a bad snap.

Iowa might struggle to maintain its place in Sunday’s Top 25.

“You have to look in the mirror as a coach and work hard, dig deeper,” Brohm said.

Iowa visits Northwestern on Oct. 26. The Wildcats were drubbed by No. 4 Ohio State 52-3 on Friday.