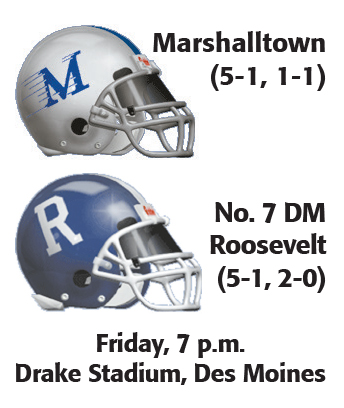 The Marshalltown football team finds itself facing a key Class 4A District 2 matchup against No. 7 Des Moines Roosevelt this Friday night at Drake Stadium.

“I think they are a much-improved football team from what we saw last year and from what I can tell on film,” Marshalltown head coach Adam Goodvin said. “They are a well-coached football team and you can tell they play hard. They are having success and it’s going to be a fun challenge for our guys.”

The Roughriders have averaged 42.5 points on offense this year, scoring over 40 the first three weeks of the season and dropping 93 on Sioux City West.

“They definitely like to set up the run first,” Goodvin said. “They are going to run the football and try and keep doing that. A lot of the same plays are just different formations. They are going to play-action off the run so they can open up the passing game.”

At the helm of the Roosevelt offense is running back Jaden Koger, who has rushed for 913 yards and 13 touchdowns while averaging 7.5 yards per carry.

“He’s a very talented kid,” Goodvin said. “He’s got some speed. He runs hard. They have got some guys that move well on their offensive line and some other backs that do a great job of blocking. He just so happens to be the one that’s getting all of these carries and he’s had a lot of success.”

“What they like to do offensively, is they like to run a lot of sweeps and a lot of inside zone and a lot of play-action off that. The concept isn’t anything that’s foreign to us but they do an excellent job of executing that.”

“They also have some speed at wide receiver as well,” Goodvin said. “Those guys run some good routes and they get open for their quarterback. They have had success through there as well. You can tell on film that they are both exceptional athletes. Defensively, we are going to have to be disciplined. We have to trust our reads and play hard and fast.”

On defense, Roosevelt has been just as dominant holding teams 12.6 points per game while posting two shutouts.

The Roughriders run a Tampa 2 type of defense, according to Goodvin, which has shown much success as the team has forced 22 turnovers — returning five of those for touchdowns — and has also forced 30 sacks.

According to Goodvin, the second half of the season will require Marshalltown (5-1, 1-1) to play at its best to make a run for the postseason.

Like we told them after the game last Friday,” Goodvin said. “From here on out good teams play their best football this time of year. That’s the only option we have is to play our best football and to continue to keep getting better. We’re both 5-1 at this point. It’ll be an exciting game for our kids.”