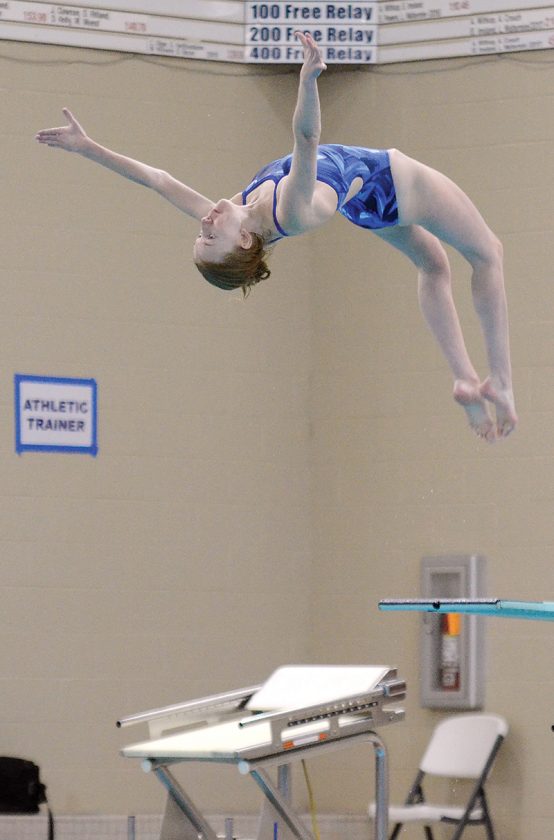 Taylor scored 414.75 in her top-10 finish. Winning the meet was Ankeny senior Sydney Jorgensen, as the TCU commit won the meet with an 11-dive score of 513.20 points.

“Excellent meet for [Taylor],” Marshalltown head coach Angie Nelson. “She finished three points low of her best which is amazing here. She had a really consistent day. Everything she threw was consistent. She had a nice top on everything and she finished really pretty.

“It was a little tight for the first five [dives] there. I think we kind of predicted and kind of expected that. She had just enough degree of difficulty to keep her up in the running. Her back three here were just nice. They were clean. They were solid and they were just fun to watch.”

According to Taylor, the first dives went as best as they could for her, but it was just before the second cut that Taylor faced that caused some worry because she wasn’t sure of her place. 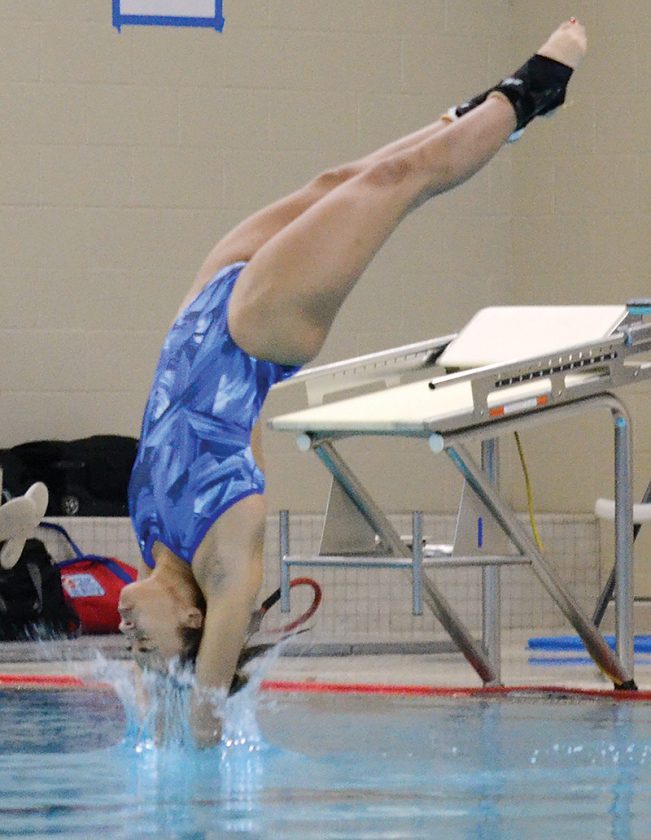 T-R PHOTO BY ANDREW ABADIE - Marshalltown sophomore Mia Rasmusson plunges into the water on her back dive during Friday’s state diving competition at the Marshalltown YMCA/YWCA. Rasmusson placed 31st in her state debut.

“I feel wonderful. I was nervous for the second cut because I didn’t know where I was placed at,” Taylor said. “After I made it, the nerves went away and I could perform.

“I know I just have to perform each dive to my best ability to not get caught. It was very nerve-wracking.”

Overall, Taylor stayed consistent throughout the meet as she never had a dive that went under 30 points, which was her goal entering the meet.

“She nailed [the consistency],” Nelson said. “Top-10 is awesome. This is always a learning experience. She had some experience from last year being here and knowing what it would be like. She dives with a lot of these girls during club diving. The first five are pretty nerve-wracking but after that you know you got it. She had a nice middle three but every dive she was sitting [in the athletes’ area] and thinking about it — focusing on that dive and mentally rehearsing it so she could go up there and throw it. Really proud of her performance and of the grit it takes to be able to stay up and positive through the entire thing.”

Sophomore Mia Rasmusson finished in 31st place with a score of 163.40 points after falling short of making the first cut. Despite not making it past the fifth dive, her teammate Taylor was impressed by Rasmusson’s first state meet appearance.

“It was so much fun having Mia there diving with me,” Taylor said. “I feel like Mia did amazing today, especially for the first time. Every time you go to state there is a bunch of nerves with it and I think she handled it very well. I know she will be back next year and I know she will do even better. I can’t wait to see her and all of my teammates in the future.”

“It just wasn’t enough to push her into the top-20 there but she was kind of skirting it for most of the first five so she wasn’t very far out for a while and then she finished up with her best dive which was the back dive,” Nelson said. “It’s a nice one to finish on.

Nelson was proud of both divers’ performances and anticipates an even more successful season next year with both divers returning next fall. 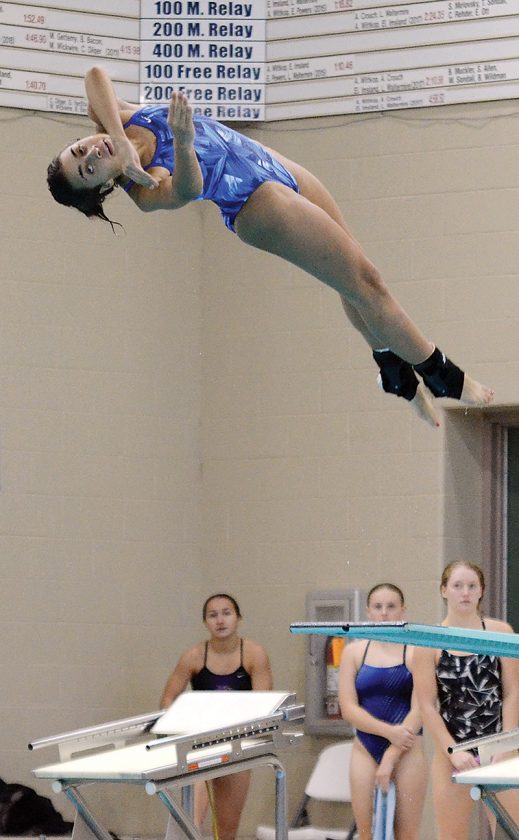 “Absolute great season for Mia,” Nelson said. “Great performance today and what a great experience to be able to be here to do this so that next year you can improve on. Excellent things today.

“Hannah is amazingly consistent. She does a good job on every dive. We don’t put a dive on her list unless it’s a good dive. It’s fun to watch her because she doesn’t have a whole lot of downers at all. She’s fun to coach. She knows where she can improve on for some positioning. She’s got some dives that she is going to start working on and she’s got nowhere to go but up to go.”

T-R PHOTO BY ANDREW ABADIE – Marshalltown sophomore Mia Rasmusson plunges into the water on her back dive during Friday’s state diving competition at the Marshalltown YMCA/YWCA. Rasmusson placed 31st in her state debut.