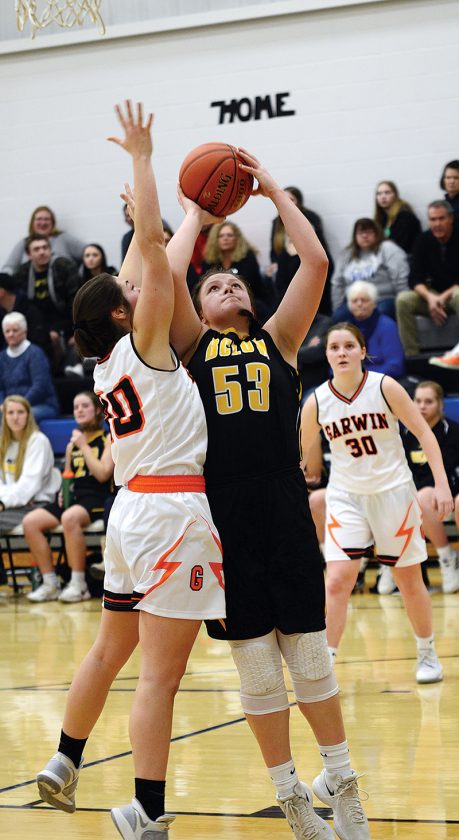 T-R PHOTO BY ROSS THEDE - BCLUW sophomore Chloe Walters (53) goes up for the shot against GMG’s Jordan Yilek, left, in the second half of Saturday’s girls’ basketball game in Garwin. Walters had a double-double of 17 points and 12 rebounds in the Comets’ 58-36 victory.

GARWIN — There was never going to be a good time for the BCLUW girls’ basketball team to lose senior center Madison Ubben for the rest of the season to injury, but a week with two non-conference games is about as good as it could get.

The Comets couldn’t overcome losing Ubben early in the third quarter of Tuesday’s loss to Jesup, but they had time to practice playing without their prolific post presence before putting their new plan of attack into action Saturday at GMG.

And while it wasn’t Ubben leading the charge, BCLUW still turned to its interior game to get a victory.

Comet sophomore Chloe Walters had a double-double in her first varsity start, putting up game-highs of 17 points and 12 rebounds in BCLUW’s 58-36 win over the host Wolverines here Saturday night on the newly anointed Coach Gary Peterson Court. 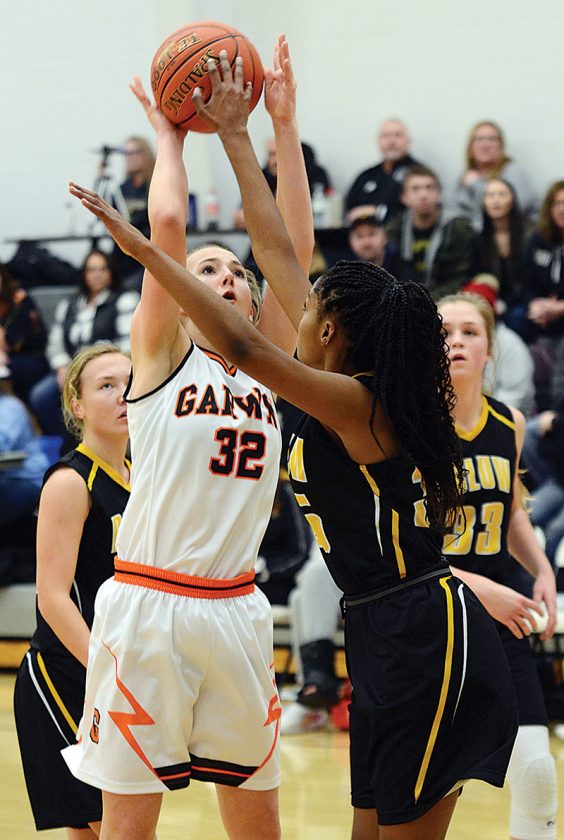 “It was long overdue as far as I was concerned,” Hornberg said of the court dedication. “All in all, obviously we wanted to win in honor of coach, but I was OK with our effort. BCLUW plays in a better conference, but I think going forward we’ve got three games this week that if we compete like that, move the ball, I think we should be in all three games.”

The Comets (8-4) got a win ahead of their own three-game slate of NICL West Division action, one they’ll have to face without their leading scorer and rebounder in Ubben. In her absence, BCLUW got a strong start from the sophomore assigned with filling a bulk of the void.

Walters scored nine points in the opening quarter as the Comets jumped out to a 21-9 lead. GMG (2-8) did its best to take her way with its 2-3 zone defense, but Walters either found a way to get open or crashed the glass to get the ball herself. Half of Walters’ 12 rebounds in the game were offensive boards, resulting in nine second-chance points.

“Our goal was to eventually play Madison and Chloe together down low as the season went on, but now obviously we can’t do that,” said BCLUW head coach Dave Lee. “That’s gone now, so we’ve got to have some of the other people step up, and not just Chloe.”

BCLUW fired out of the blocks and took advantage of GMG’s eight turnovers in the first quarter. Payton Pekarek knocked down a pair of 3-pointers, Allison Engle made one, Betula Messerly added another, and Walters scored the other nine points to make it a 12-point game at the first break. 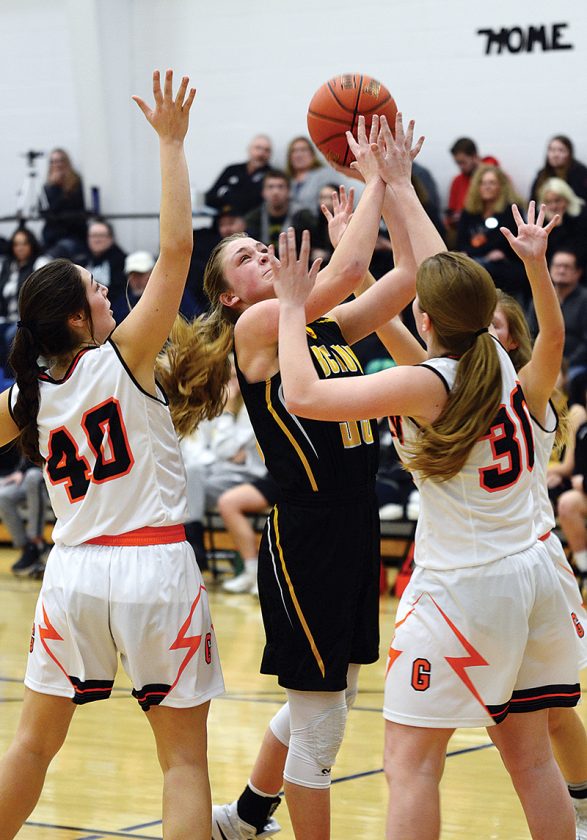 GMG never got closer than 10 the rest of the way.

“One of the fears was that we would be impatient on offense without Madi, but I thought we played within ourselves,” Lee said. “Chloe knows how to play inside. What she does, she does well. But maybe the biggest thing that we’re going to miss is Ubben on defense. She gives us an element because of her quickness and her reach.”

The Comets fared just fine without her on Saturday, though that was against a GMG squad that is now averaging just 30.7 points per game. Belle Duncan made a pair of fourth-quarter 3-pointers to finish as the Wolverines’ leading scorer with eight points. Lindsey Slifer, Emily Vaughn and Jenna Yilek added six points apiece.

Duncan (8) and Vaughn (6) were GMG’s leading rebounders, and Vaughn finished with three steals as well. But 25 turnovers were too many for the Wolverines to overcome.

“We knew what the gameplan was going to be, but BCLUW shot the crap out of the ball,” Hornberg said. “In the second half I thought we looked better. We found some stuff that worked, and like I told the girls, once you find that scab you’ve got to continue to pick at it.

“The scoreboard didn’t show it but I thought our offense was the best that we’ve seen.”

The Comets start next week with Tuesday’s trip to West Marshall. BCLUW hosts AGWSR on Friday and South Hardin on Saturday in a make-up game. 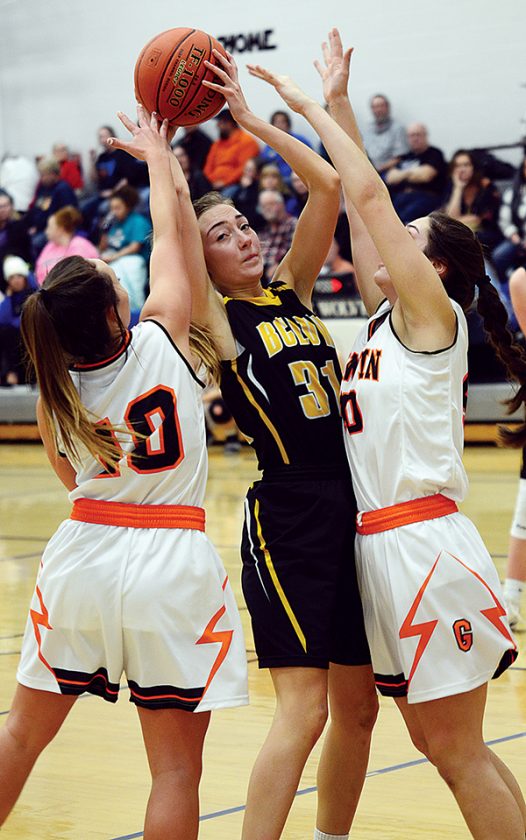 T-R PHOTO BY ROSS THEDE – BCLUW senior Mason Yantis, left, shoots against GMG’s Adam Cox (32) during the second half of their game Saturday in Garwin. Yantis scored a career-high 17 points in a 67-51 Comet victory.

T-R PHOTO BY ROSS THEDE – BCLUW sophomore Chloe Walters (53) goes up for the shot against GMG’s Jordan Yilek, left, in the second half of Saturday’s girls’ basketball game in Garwin. Walters had a double-double of 17 points and 12 rebounds in the Comets’ 58-36 victory.

T-R PHOTO BY ROSS THEDE – GMG’s Avery Bryant (0) snares a rebound between BCLUW defenders Jack Hughes (35) and Eric Knott (45) during the first half of their game Saturday in Garwin. Bryant led GMG with 15 points in the loss.

AP PHOTO – Iowa State guard Rasir Bolton (45) drives to the basket past Oklahoma guard Jamal Bieniemy during the second half of a Big 12 Conference basketball game Saturday at Hilton Coliseum in Ames. 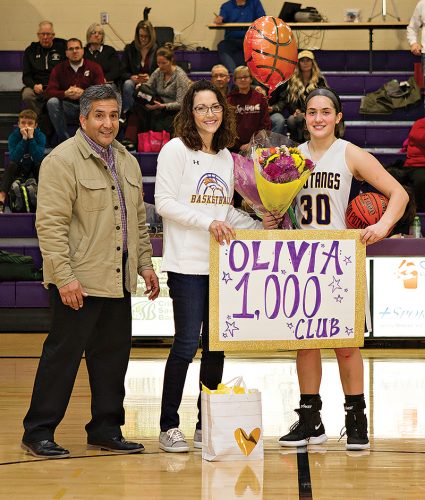 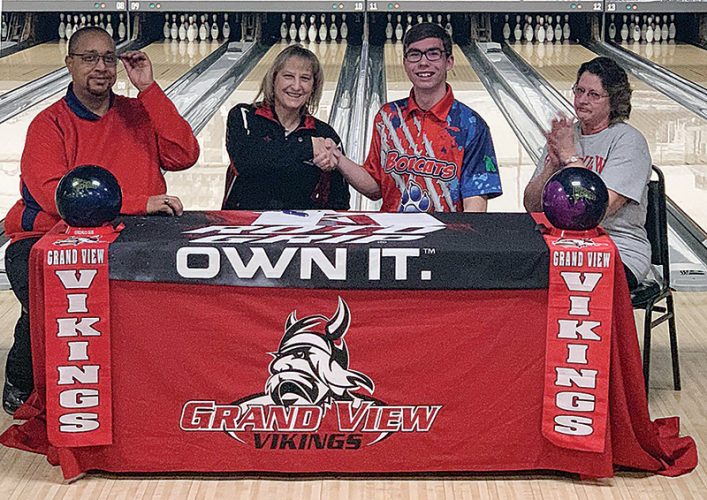 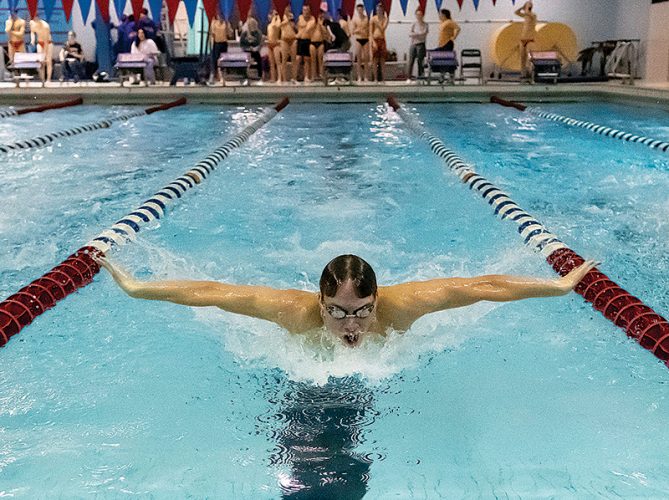 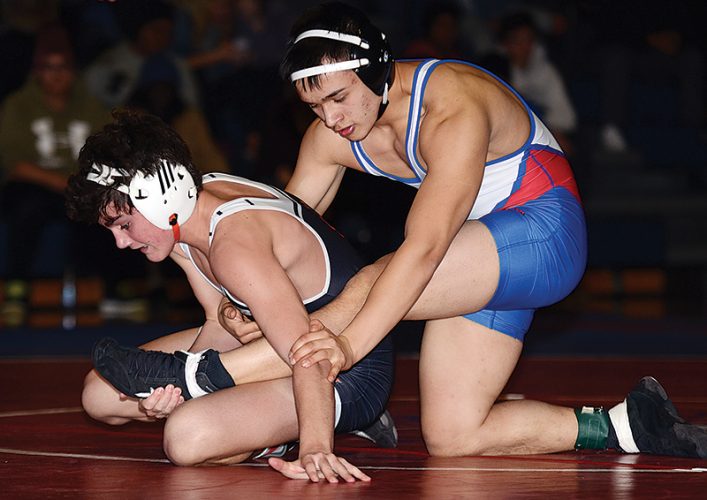