IOWA CITY — University of Iowa junior defensive end A.J. Epenesa announced he will enter the NFL draft after two of the most dominant performances of his career.

Both Epenesa and Wirfs posted their decisions on their Instagram pages, writing that their time with the Hawkeyes was everything they hoped it would be.

“Over the last three years I have had the amazing opportunity to play for the University of Iowa,” Epenesa wrote. “I got to live my childhood dream and represent the black and gold. After long discussion with my parents and loved ones I have decided to follow another childhood dream and enter into the 2020 NFL draft.”

Epenesa was an Associated Press second-team All-American and an AP All-Big Ten first-team pick. The 6-foot-6, 280-pound junior from Glen Carbon, Illinois, led the Big Ten with 10.5 sacks as a backup in 2018. This season, he had 11.5, making him the first Iowa player with double-digit sacks in consecutive seasons since 2002-03.

He made a career-high 14 tackles with two sacks and 4.5 tackles for loss in a win at Nebraska, and followed that with 2.5 sacks and defensive MVP honors in a Holiday Bowl win over Southern California.

Wirfs, a 6-foot-5, 322-pound native of nearby Mount Vernon, started 33 games on the Iowa offensive line in his career. He was named the Rimington-Pace Offensive Lineman of the Year in the Big Ten Conference last month after earning first-team all-conference honors.

One of six semifinalists for the Outland Trophy, Wirfs is widely projected as a first-round draft pick.

“I couldn’t be more proud to have represented my home state,” Wirfs said on Instagram. “These past three years have been the ride of a lifetime, getting to compete with my brothers and represent the state of Iowa is something I will hold with me forever.”

Young, who totaled 1,262 rushing yards and eight touchdowns in his Hawkeye career, was a part of a three-man backfield for Iowa this season that slowly gravitated toward true freshman Tyler Goodson’s emergence as the feature back.

“Excited for this next chapter of my life! keeping my faith in god, however or wherever he decides to use me!” Young posted on Twitter.

CEDAR FALLS — AJ Green scored 22 of his 29 points in the second half and Northern Iowa rallied to beat Valparaiso ...

COUNCIL BLUFFS — Iowa Western scored the last two points of regulation and the first seven points of overtime to ... 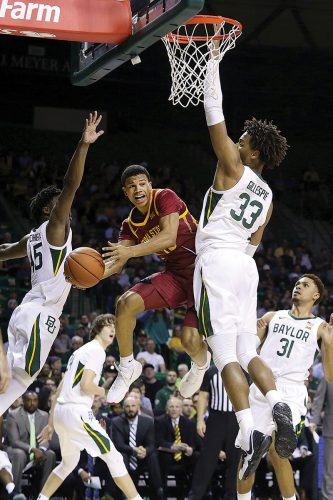 No quarter for Cyclones in Waco

The art of educating everyone