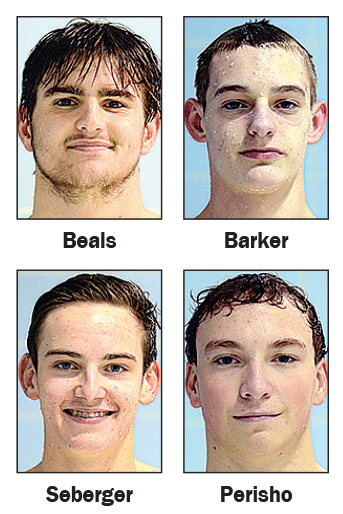 The Bobcats’ 200 freestyle relay realigned its four swimmers and shaved even more time off its final clocking, collecting one of Marshalltown’s five runner-up finishes en route to a third-place finish at the CIML Iowa Conference meet at Fort Dodge Senior High School.

Marshalltown’s relay quartet of Aaron Seberger, Marcus Barker, Nash Perisho and Carson Beals on Thursday swam a time of 1 minute, 30.39 seconds, and the same foursome achieved an even faster outcome with Saturday’s shift in order to Beals, Barker, Seberger and Perisho.

The adjusted lineup hit the wall in 1:29.70, trailing only Waukee in what was a somewhat surprising and eye-opening outcome for Loupee.

“They wanted to try that and conference is a good time to do that,” he said. “The coach wasn’t real excited about that, and then they turned around and had a season-best time. We’ve got another meet to think about the order, but that was a good race and we got Valley. Getting second in that relay was a good deal.”

Second-ranked Waukee won the CIML Iowa meet with a whopping 508 points, No. 9 Valley was second with 427 and the No. 13 Bobcats were third out of six teams with 339 points. Mason City (229), Southeast Polk (161) and Fort Dodge (120) rounded out the second half of the conference standings.

Marshalltown’s place at the end of the day would not have changed had something gone awry with the juggled lineup in the 200 free relay, so Loupee was willing to put the alternate plan into action two weeks before the state-qualifying district meet.

The gamble paid off.

“We kind of kicked the idea around the last couple weeks,” Loupee said of the lineup change. “They came to me and said they wanted to try it this way, and you’ve got to let them have a voice in it. They’ve got to believe in it as much as I do.

“If there’s a time to tinker and have good competition on your shoulder, today was the day.”

All four Bobcat swimmers completed their down-and-back sprints in fewer than 23 seconds, highlighted by a strong opening leg for Beals and a powerful finish from Perisho.

Compared to Thursday’s swim, three of four swam faster splits and the result was a time drop of 69-hundredths of a second. Waukee swam 1.59 seconds faster than Thursday and remained in front of the Bobcats, but at this point in the season every race is still against the clock.

“Aaron Seberger has the best quick-twitch reaction time, his hands are always the first to hit the water against anybody,” Loupee said. “I have tried to utilize that at the front end of the race, and then Carson is an expert at timing his exchange. His exchanges are always very sharp, but he’s a pretty strong sprinter as well. They both did very well in their new roles.

“We’ve got one more Tuesday at home against Indianola to experiment again and see how we want to do it, and we can always change it up again if we make it to state.”

A similar Bobcat quartet took second place in the final race — the 400 freestyle relay — as Perisho, Tyler Downey, Barker and Beals collected second in 3:22.43. Downey’s split time of 51.91 seconds was his lifetime best.

Beals added a fourth-place finish in the 200 freestyle, Seberger was fourth in the 50 free, and Marshalltown’s 200 medley relay contingent of Seberger, Brock Keeler, Stephen Blom and Ethan Benscoter earned fourth in 1:50.69.

“We had 49 season-bests and 31 lifetime-best swims for our JV and varsity,” Loupee said, “and those guys that didn’t get their season-bests were right there close to those times. We competed well up and down the lineup.

“We’ve got one more hard week of work for the varsity before we begin taper, and districts is two weeks away.”

The Bobcats close out their regular season with Tuesday’s home meet against No. 12 Indianola, and the district meet is Feb. 8 at noon at the Marshalltown YMCA/YWCA.