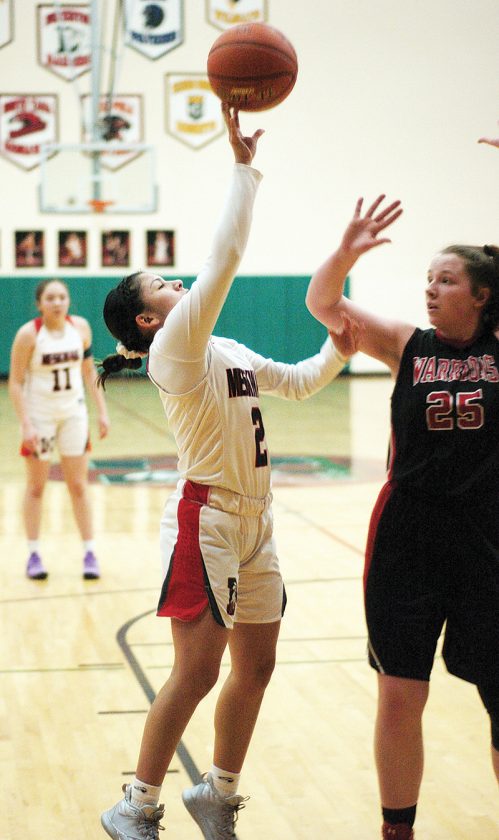 MESKWAKI SETTLEMENT — Whether it was because of ever-present foul trouble or pop-up injuries, Meskwaki girls’ basketball coach Emmett Whalen saw a lot more of his two leading scorers on the bench than usual.

Fortunately for him and the hometown Warriors, there was a third scoring threat that remained on the court all night long.

Meskwaki sophomore Geanna Bear tallied 14 points to help buffer the breaks that the team’s dynamic duo needed while playing all 32 minutes of the Warriors’ 68-45 victory over HLV in Thursday’s Class 1A Region 5 first-round pairing.

It sure didn’t hurt that, when on the court, junior point guard Deandra Navarro scored a career-high 26 points and senior leader Payton Tahahwah had a double-double of 21 points and 10 rebounds to help power Meskwaki (14-7) into the next round of the postseason.

“Geanna’s a smart basketball player,” Whalen said. “She’s very smooth with the ball, she knows what she wants to do, she knows what she needs to do, and when teams start keying on Payton and Deandra she’s really good at getting to the bucket and we saw that tonight.” 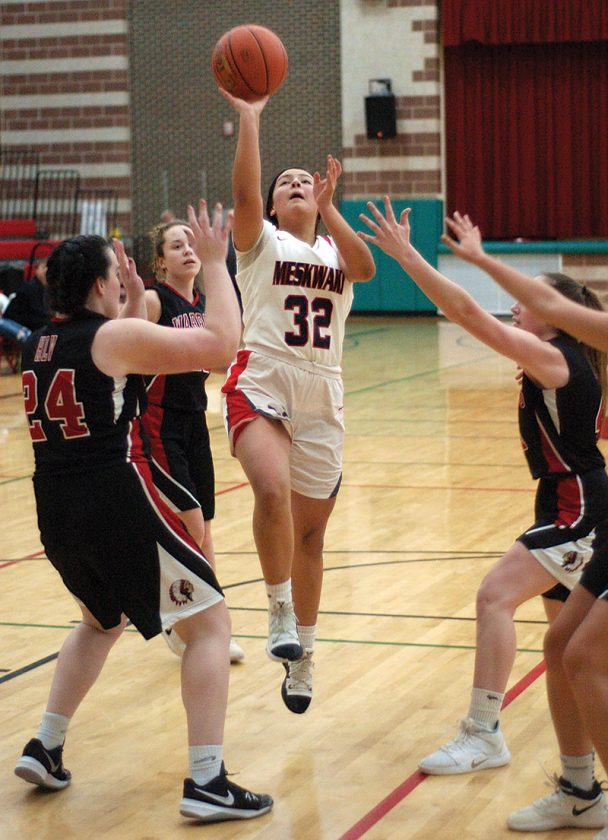 Bear was the first Meskwaki player to score aside from the team’s top two threats, and that coast-to-coast layup came with 1 minute, 35 seconds left in the second quarter. Navarro was sidelined briefly with an ankle sprain not long after Tahahwah had gone to the bench having been poked in the eye on a shot attempt under the basket.

Meskwaki led 27-17 before Bear’s bucket, and a Tahahwah free throw made it 30-17 at the half. Tahahwah had 15 of those points, Navarro netted 13 and Bear got the other two, and that’s pretty much how it went for the remainder of the game, regardless of a gimmick defensive attempt by HLV (4-19) in the third quarter.

“I just had to deal with the ankle pain and pull through, pull through with the ‘W’ for us,” said Navarro. “We embrace [being targeted by opposing teams]. We just work extra hard to get open and get the ball.”

The visiting Warriors came out in a box-and-one on Tahahwah after halftime but found no fortune there, as Meskwaki’s lead grew to 18 by the end of the third. While Tahahwah had just three points in the period, Bear netted five and both Navarro and Summer Youngbear scored four points.

Regardless of how HLV attempted to slow the Meskwaki offense, the host Warriors had an answer for it. 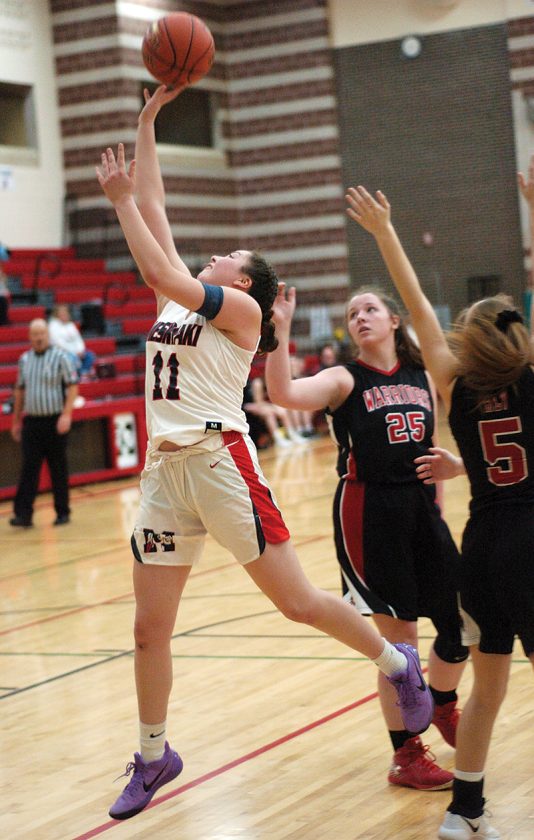 “Sometimes we have to get on [Bear] to be more aggressive because she’s so unselfish that she wants to get everybody the ball, but if we’re playing a good team and want to beat them we need her to score.

“[Tahahwah and Navarro] know they’re our engine, even if they’re having a bad shooting night just keep being aggressive, take smart shots and if they’re doubling you, give it to your teammate. We’ve got Summer who can make plays down low and Shye (Johnson) and Geanna can make shots once in a while.”

As a team, Meskwaki shot at nearly a 50-percent clip from the field, finishing 28-for-60 (46.7 percent). The Warriors attemped just 11 3-pointers, making three, but attacked the basket relentlessly against one of the poorest defensive teams in 1A. HLV entered the postseason allowing an average of 57.04 points per game, which ranked 112th out of 120 teams in the state.

Karlee Timm led the visitors with 15 points and Kayla Jack added 11 for a roster that included no seniors.

Jack made all three of her 3-pointers in the first quarter, keeping HLV within 16-15 at the first intermission.

“I knew they shot a lot of 3s so you always just kind of get nervous when you play a team like that just because they could start hitting,” Whalen said, “and in the first quarter they hit some. I thought we were a little late on our rotation a few times, gave them some open shots, but I think towards the end it probably evened out, they missed a few for us.”

Tahahwah, the only senior on the court for either team, totaled 21 points and 10 rebounds in spite of persistent foul trouble. Navarro’s career-high 26 points was accompanied by five rebounds and two steals, while Bear racked up 14 points, seven rebounds, eight assists and four steals.

Youngbear chipped in just four points but had nine rebounds before fouling out.

“I was really proud of how hard they played,” Whalen said. “They kept playing, they played a whole 32 minutes of basketball, that’s the thing I was most happy about.

“We’re think right now, we’re down to seven healthy girls so they all know their time’s going to come sooner or later.”

That may be on Tuesday, when Meskwaki hosts Collins-Maxwell (18-4) in the regional quarterfinals. The Spartans split with the Warriors during the regular season, with each winning the home game during Iowa Star Conference South Division play.

“They’re a good team, they don’t beat themselves, they’re going to make you beat them,” Whalen said, “but if we play well we’ll have a chance.”

North Tama was down 9-7 after the first quarter but a 22-point outburst from Colo-NESCO in the second quarter put the Royals up at the half 31-20. That was as close as the game would get, as North Tama was outscored 43-22 in the second half and fell 74-42.

The leading scorer for North Tama was Rylee McLean with 14 points. Lauryn Hill of Colo-Nesco led all scorers with 22 points.

The Redhawks finish the season with a record of 4-17. 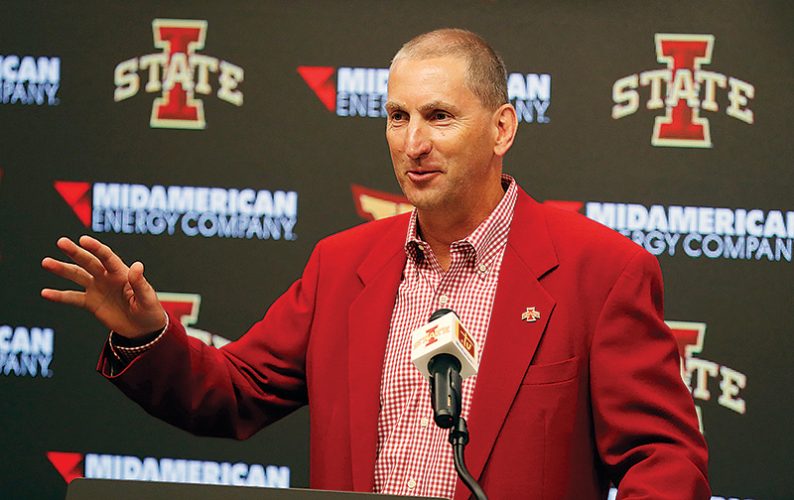 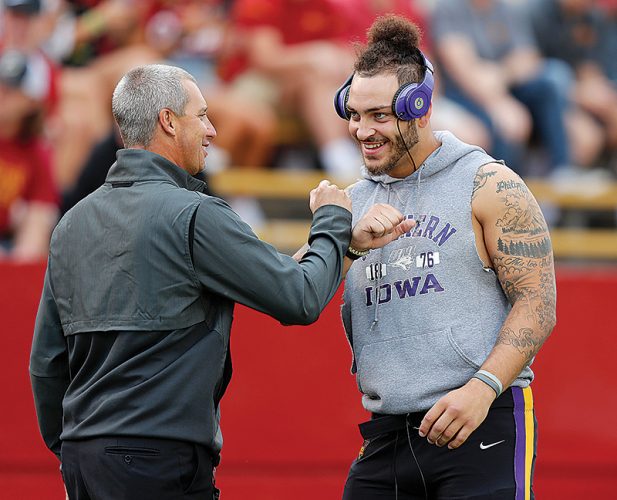 The Marshalltown Speedway has pushed back the start of its racing season to May 7 with the Dale DeFrance ...