Martinez moving on from MCC 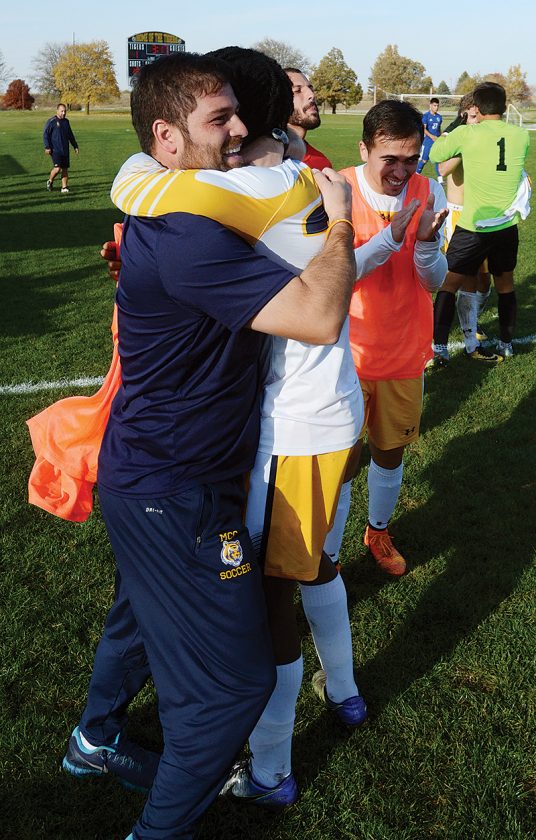 T-R FILE PHOTO - Marshalltown Community College men’s soccer coach Rafael Martinez, left, is embraced by one of his players after the Tigers defeated Iowa Lakes to win the NJCAA Region XI Tournament on Oct. 27, 2018, at MCC.

Rafael Martinez has relished his role of helping student-athletes find successes in life, in academics and on the soccer field, by serving as a platform for them to advance to the next level.

While never being able to make the connection between one of his players and the University of Missouri-Kansas City, Martinez has been granted to opportunity to make that move himself.

Martinez, the men’s soccer coach at Marshalltown Community College for the last 10 seasons, has been hired as an assistant to incoming head coach Ryan Pore at UMKC as the Roos get set to rejoin the Summit League after seven years in the Western Athletic Conference.

Martinez has also served as a physical education instructor at Marshalltown High School since 2007 and was the Bobcats’ head girls soccer coach from 2009-2011. He got married on June 26, 2010, and has since had three children — sons Iker, Rafa and Pablo — with his wife Ashley. Marshalltown is the only home they’ve known as a family, which Martinez said is both the best part and greatest challenge of uprooting for a new opportunity.

“There’s never going to be a perfect moment, so we have to make it perfect, make this the best possible moment for us,” he said. 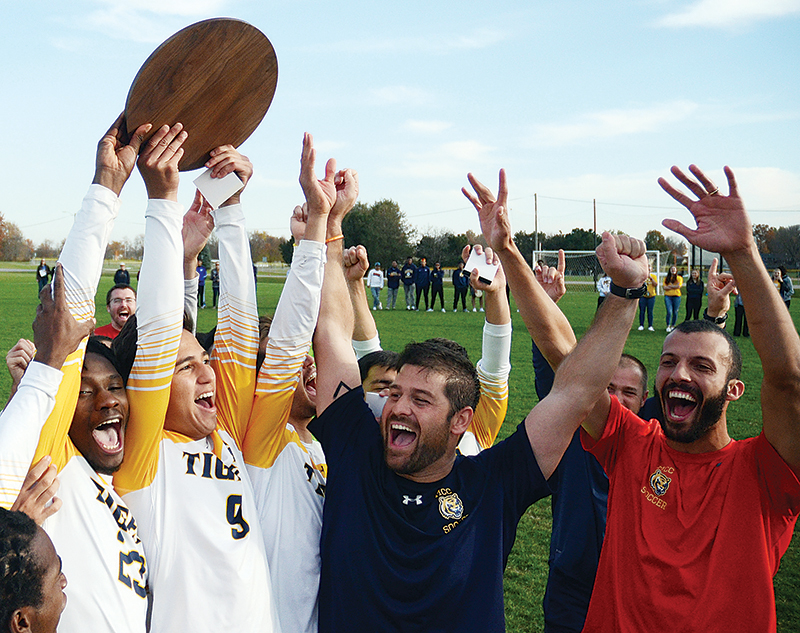 It’s exactly what Martinez did for the Marshalltown Community College men’s soccer program in 2010, when he took over as head coach after Marcelo Serrano was removed for NJCAA recruiting violations. The Tigers were forced to forfeit their entire 2009 season and banned from postseason play for that year and the next, while losing scholarships and a bulk of their roster.

Martinez, with only a year of coaching girls high school soccer in Iowa and three years as Serrano’s assistant on his résumé, accepted MCC’s head coaching position in spite of the foreseeable challenges.

With limited experience, a decimated roster, recruiting restrictions and scholarship shortcomings, the Tigers put together a 6-9 season in the fall of 2010 that Martinez still holds in the highest regard.

“That was obviously an incredible opportunity but full of challenges because obviously we lost a lot of the budget finances, we lost 90 percent of our possible returners, and I think we started that year with three sophomores,” Martinez said. “We had to basically start from zero, we couldn’t play regionals, and to be honest with you, 6-9 was an incredible season that I put up there with our regional championships. We got six wins in a very tough conference like ours, and even though we had a worse record, I thought we did extremely well — way over our expectations — which definitely fueled my interest and motivation for the future.

“Obviously we have had some tremendous seasons, but the difference between the expectations and the end result are most highlighted by that season. The goals I set for myself were: have a team, follow the rules and be competitive, be able to compete sometimes, and we did that. We beat Iowa Central that was ranked in the top-20, that was a highlight of that season, and that was the year that convinced me [coaching] was what I wanted to do.”

Martinez, in 10 years, accumulated a record of 138-44-12 for a .742 winning percentage, but it’s the lives he impacted positively that have meant the most to him.

“Year after year you see that group of players moving on (to the next level) and if I contributed a little bit in someone being better than before, that’s something I feel I’m going to miss,” he said.

Entering the 2019 season, 50 soccer players from Martinez’s program advanced from MCC to a four-year college. Twelve of the 14 sophomores from the national tournament team of 2018 signed with four-year schools.

“Coach Rafael Martinez, thank you for taking a chance on me out of high school,” 2015 MCC graduate Daniel Barrera wrote on Martinez’s Facebook page. “If wasn’t for you I wouldn’t have accomplished my success in the collegiate level. It was an honor to be one of your players and team captain. Thank you for everything that you’ve done for myself, MCC and the Marshalltown community. You will be missed and I’m excited for the next step in your career!”

Martinez said his primary area of expertise will be recruiting international players, so he may return in the future to lure the Tigers’ best to Kansas City. He wasn’t searching for a way out of Marshalltown when UMKC came calling, but coach Pore presented him with an opportunity he and his family couldn’t pass up.

“We had spoken about players in the past when he was an assistant at the University of Tulsa, he made a visit to Marshalltown in the past and talked to some of the players, and from that visit and our previous conversations he brought me the opportunity to become his assistant coach,” Martinez said. “It had not crossed my mind to leave.

“It’s a really big change for us but for sure I’m obviously extremely excited. I didn’t know I was going to have an opportunity like this, especially in this time I wasn’t really looking for anything.”

For 13 years, Marshalltown has been home to Martinez. Iowa is all he’s known since he left his home country. Martinez played in a soccer showcase that in 2004 earned him a scholarship at Iowa Wesleyan College in Mount Pleasant, where he played soccer before graduating in just three years. He student-taught at WACO High School in Wayland, Iowa, as well as at Mount Pleasant’s middle school. He arrived in Marshalltown in the fall of 2007 to be a physical education instructor at Marshalltown High School.

He’s been “home” ever since.

“It’s definitely tough for many reasons and many aspects,” he said of leaving Marshalltown. “Obviously the toughest part is moving my family from Iowa, and a place where we’ve been very comfortable and supported by many in the good and bad, or challenging I should say, and that obviously is a big thing. And then I have two jobs that I absolutely love.

“The people from the very beginning have welcomed me into the community in an incredible way. I mean it, I don’t just say it. Leaving the community is also sad and different, and of course the fact that we have such a great amount of pride in Marshalltown and MCC. The fact that we’ve helped a lot of young players from all over the world adjust to life in the United States and academics and the sport of soccer, and to see them progress and make their dreams come true, that’s incredible.

“Obviously my coaching staff — Creighton (Jenness) and Chris (Fuchsen), especially these last few years, have been like brothers to me. They’ve been through the hardest part with Pablo (diagnosed with Acute Lymphoblastic Leukemia in September 2017) and they’ve been incredibly supportive and I enjoy spending time with them. Being so far from my hometown, finding people like both of them, friends, almost brothers, is going to be hard.

“I’m extremely excited. Certainly I’m worried about changes, but again, I am comfortable in the unknown. I don’t know who I am outside of this environment because I’ve been here so long, I want to find out who I am and if I can support a coaching job at the Division I level.”

MCC athletic director John Kriebs said the pursuit of a new head coach will begin as soon as possible, considering the current pandemic gripping the globe.

“Coach Martinez will be missed,” he said. “He was only the third soccer coach here at Marshalltown Community College and the impact he made will be felt for some time. We will start a search for his replacement as soon as we are able.”

T-R FILE PHOTO – Marshalltown Community College men’s soccer coach Rafael Martinez, left, is embraced by one of his players after the Tigers defeated Iowa Lakes to win the NJCAA Region XI Tournament on Oct. 27, 2018, at MCC.