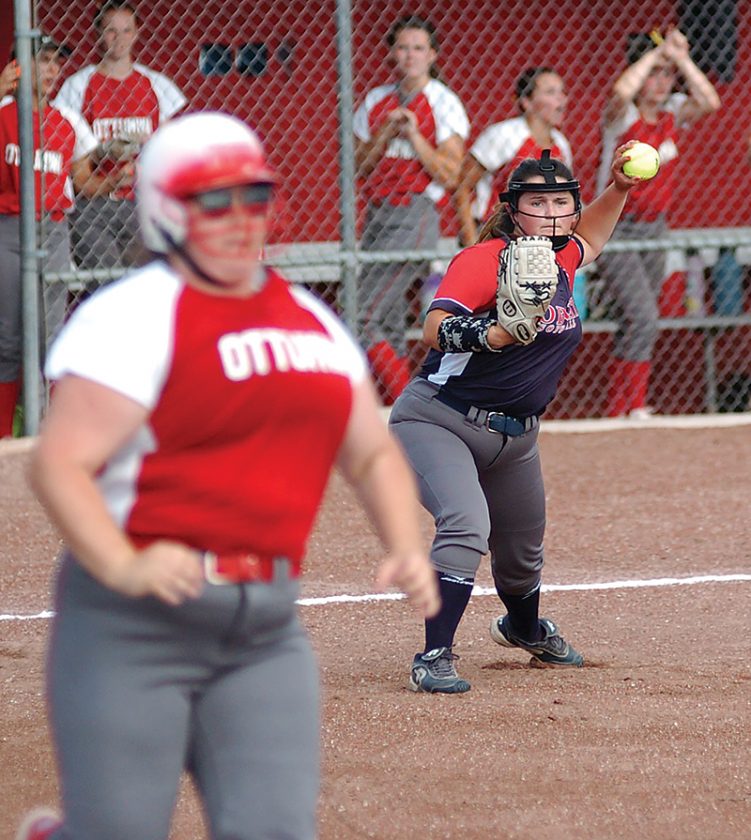 T-R PHOTO BY ROSS THEDE - Marshalltown junior pitcher Kailee Pollard, right, throws to first base as Ottumwa’s Jillian Heaton runs out her sacrifice bunt during the fourth inning of Game 1 on Friday in Marshalltown.

The first win of the season remained elusive for the Marshalltown High School softball team, even if they got a real good glimpse at it on Friday night.

The Bobcats (0-12) led Class 5A No. 10 Ottumwa through four innings of Friday’s CIML opener, but the Bulldogs came through where Marshalltown couldn’t in an eventual 4-2 victory for the visitors.

Ottumwa (5-4) made sure the Bobcats didn’t get a second chance to collect their first win, sending 13 batters to the plate in the first inning of the nightcap en route to a 14-3, five-inning triumph to complete the sweep.

“I think Ottumwa pretty much got a talking to from their coach, they were pretty upset, I could see it in their eyes and their body language in that first game,” said Marshalltown head coach Jim Palmer. “I knew that was probably going to happen (in the second game) and I warned the girls of that.”

Ottumwa split with top-ranked Fort Dodge on Monday before the Dodgers dispatched the Bobcats twice on Wednesday night, but the Bulldogs didn’t have their same bite in the Friday’s opening game. MHS junior pitcher Kailee Pollard had control and command in the circle and managed to keep Ottumwa’s bats at bay for as long as she could. 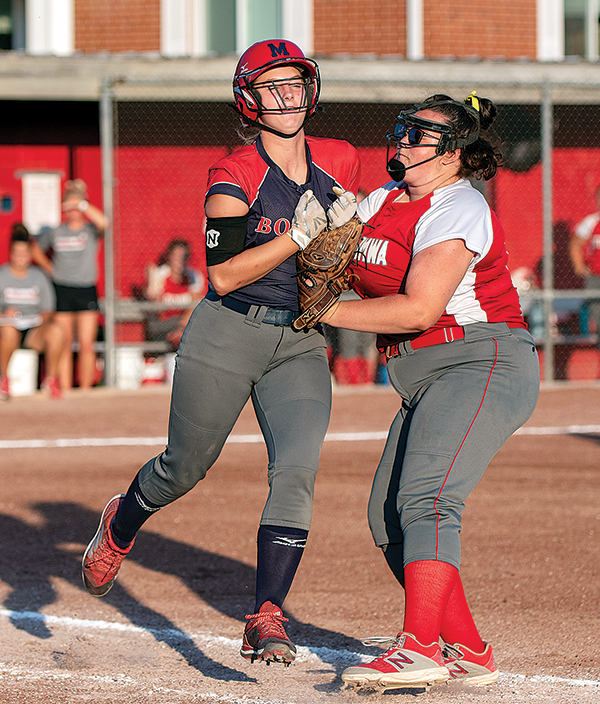 Marshalltown took a 1-0 lead in the bottom of the third inning, as Avery Mull reached with a leadoff single and successfully slid around the tag to steal second base. Emma McWherter couldn’t get the sacrifice bunt down but moved Mull over anyway with a groundout, and Sophie Younkin drove her across with a groundout to shallow right field.

The score was 1-0 Bobcats entering the fifth inning, when Ottumwa finally managed to bunch together some hits. Amber Shotts, Ella Allar and Kacy Nickerson each singled to even the score at 1-all, and a walk to Kaylee Bix loaded the bases with nobody out.

After back-to-back strikeouts by Pollard, Josie Lemonds caught up with an 0-2 offering to deliver a two-run single to left field that put the Bulldogs in front for good.

Marshalltown got one of the runs back in the bottom half, starting with a leadoff hit for Pollard. Her courtesy runner Maggie Augustine slid in under the tag at second base to steal successfully before advancing on a wild pitch and scoring on Mull’s groundout.

Trailing by one, the Bobcats put themselves in prime position to rally in the bottom of the sixth after back-to-back singles by Younkin and Erica Johnson. Ottumwa senior hurler Kacy Nickerson battled her way out of trouble with an infield fly and a pair of strikeouts to preserve the Bulldogs’ slim advantage.

Ottumwa tacked on an insurance run in the top of the seventh thanks to doubles by Nickerson and Hannah Huisenga, and Nickerson got three groundouts to retire the Bobcats in order in their last at-bat.

Marshalltown made the most out of its four hits, but Nickerson didn’t walk a batter and Ottumwa didn’t commit an error. Johnson, Pollard, Mull and Younkin accounted for the Bobcats’ four singles. Nickerson struck out six for the win.

Pollard did her best to scatter 10 hits and two walks while striking out five in the loss. Nickerson finished 3-for-4 at the plate with a double, two runs and an RBI to lead the Bulldogs.

“Kailee was spinning the ball awesome and she was hitting her corners and I thought the umpire did a real good job of recognizing that too,” said Palmer. “The girls’ confidence is there and they’re having fun. They’re more focused and into the game when you have a competitive match going on.

“I was excited going into the fourth inning and we’re still up by one, but I knew it was a matter of time before Ottumwa was going to do it. We had some opportunities but we left a few people on base, but we’ll just grow from that and get better.”

The second game was a stark contrast of the first, as Marshalltown committed two errors in the top of the first inning and Ottumwa scored seven times in its first at-bat against Mull. Ava Augustine got the final out of the first frame, but the Bulldogs eventually got to her too. Ottumwa scored four more times in the third and three more in the fifth to take a commanding 14-0 lead.

Marshalltown made good on its last chance to try and at least prolong the contest by scoring three times in the bottom of the fifth. Himes hit a ball to the gap in right-center field and tried to extend it to a double but was thrown out. Back-to-back walks by Ava Augustine and McWherter followed, and Johnson came through one out later with a two-run single up the middle.

After Madi Finch was hit by an Ashton Brown pitch, Khloe Shipley capitalized on her only at-bat of the night with a run-scoring single to center. Brown settled down to retire MHS senior Sophie Blubaugh on strikes to end the game by the run rule.

Mull took the loss, allowing seven runs — though only three were earned — on six hits and two hit batters in two-thirds of an inning. Ava Augustine allowed six hits and seven runs — five earned — with three walks and three strikeouts in 4 1/3 innings.

“Avery was just off a little bit, not hitting her spots and leaving them over the plate a little too much, and that’s going to let some hits happen,” Palmer said. “But in her defense, we had two errors in her time that we probably should only have allowed three runs.

“We wash it away, we can’t go back. The only thing we can work on is the things we need to do ourselves to get better and that’s including myself, and we move onto the next match.”

Ottumwa’s Jillian Heaton went 3-for-4 at the plate in the second game, slamming two doubles, a home run and driving in six runs. Nickerson, Bix and Huisenga each went 2-for-3 with an RBI and two runs scored.

Brown went all five innings for the win, allowing three runs on four hits, three walks and one hit batter while striking out six. The Bobcats got hits from Kyra Feldman, Johnson, Shipley and Himes.

Next up for MHS is Monday’s home doubleheader against Ames.

T-R PHOTO BY NOAH ROHLFING – Marshalltown senior Bennett Hageman, right, dives into third base and is tagged out by Ottumwa’s Jesus Jaime during the second game of Friday’s CIML doubleheader at the MHS diamond.

T-R PHOTO BY NOAH ROHLFING – MHS senior Joseph Harris, right, is congratulated by Jacob Van Pelt after hitting a two-run home run in the bottom of the first inning of Game 2 on Friday against Ottumwa.

T-R PHOTO BY ROSS THEDE – Marshalltown junior pitcher Kailee Pollard, right, throws to first base as Ottumwa’s Jillian Heaton runs out her sacrifice bunt during the fourth inning of Game 1 on Friday in Marshalltown.