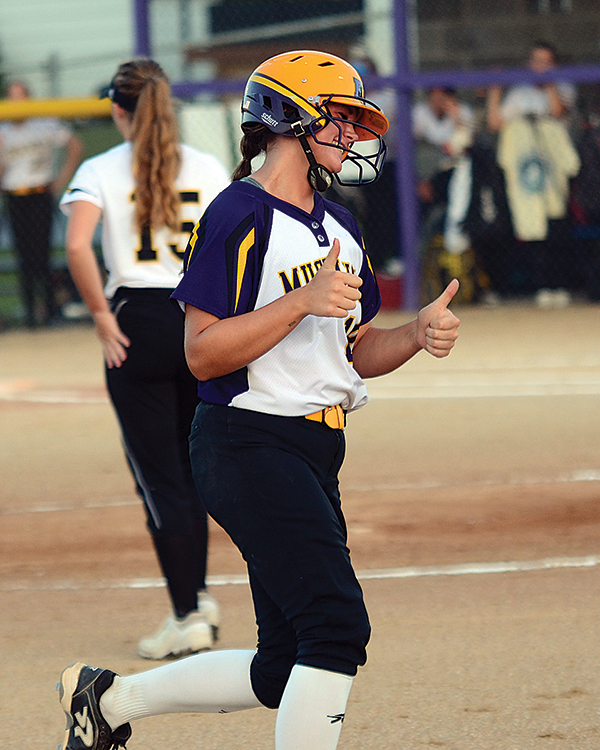 T-R PHOTO BY NOAH ROHLFING - East Marshall senior pitcher Kodie Hoskey shares a thumbs-up with her father and head coach Jary Hoskey as she rounds third base on her three-run home run in the bottom of the first inning of Monday’s softball game in Le Grand. East Marshall beat West Marshall 7-3.

LE GRAND — Throughout Monday night’s game between cross-county rivals West Marshall and East Marshall, Mustangs coach Jary Hoskey could be heard getting frustrated with his young squad for a myriad of mistakes during an otherwise positive performance.

It was because of those mistakes, such as a runner not tagging up after a fly ball with a chance to score a run, that Jary had mixed reactions to East Marshall’s 7-3 win over the Trojans (5-4), which moved the Mustangs to 8-1 on the season.

Jary explained his frustrations with the offense after the game.

“Our baserunners I didn’t think were as good as I would like to have them,” Jary said. “Let’s hope it’s a bump in the road.”

It started out as a smooth evening for the Mustangs, with starting pitcher and senior leader Kodie Hoskey hitting a three-run home run over the right-field fence in the bottom of the first inning to put East Marshall on the board. Kodie threw another complete game, striking out seven and allowing three runs (two earned) on two hits and three walks. The Mustangs added a run in the second inning when Jayleigh Pansegrau scored on a single from Reagan McIlrath. Callyn Curphy and Emma Pfantz led the Mustangs with two hits — Rayne McIlrath, Reagan, Kennedy Wheater, Catelyn Fisher and Pansegrau connected once each. 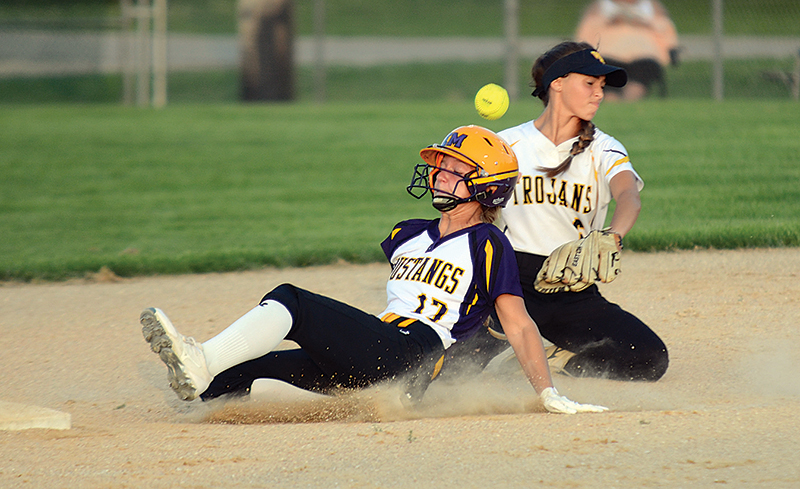 T-R PHOTO BY NOAH ROHFLING - East Marshall’s Reagan McIlrath, left, slides safely in with a stolen base as the throw bounces past West Marshall’s Lilly Buck in the first inning of Monday’s softball game in Le Grand.

West Marshall got on the board in the third inning but gave up two more runs to the Mustangs to go down 6-1. Starting pitcher Loran Nicholson gave up seven runs (five earned) on 10 hits and four walks on the night. Coach Kim Tarbell said the Trojans struggled with errors all game, and the Mustangs were able to capitalize.

“They capitalized on our errors,” Tarbell said. “They had a few more hits than us but most of ’em were walks and errors. We’re gonna have to toughen up our defense.”

West Marshall’s fifth-inning showed some life as Kalyn Polley and courtesy runner Peyton Smith scored, helped by an East Marshall error. Polley and Renae Schaper got the only two hits for the Trojans.

The Mustangs had five errors, a performance Jary said cannot be duplicated. The overall youth of the Mustangs is noticeable — only two seniors started Monday night along with six sophomores and two eighth-graders — but in Jary’s eyes, East Marshall is far from the finished product despite the strong start.

“We’ll get better because we’re young,” Jary said. “But you can’t make those errors. Luckily we got a three-run shot in the first inning from Kodie and that put the pressure on them because they had to score.” 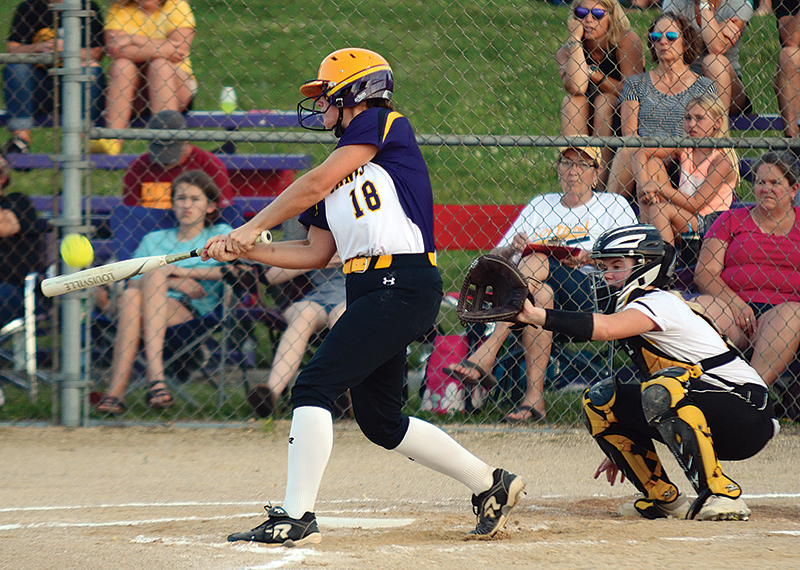 Up next for the Mustangs is a home game against Roland-Story Tuesday night in Le Grand. West Marshall hosts 9-1 Collins-Maxwell Tuesday in State Center.

JBS to give $2.7 million to Marshalltown