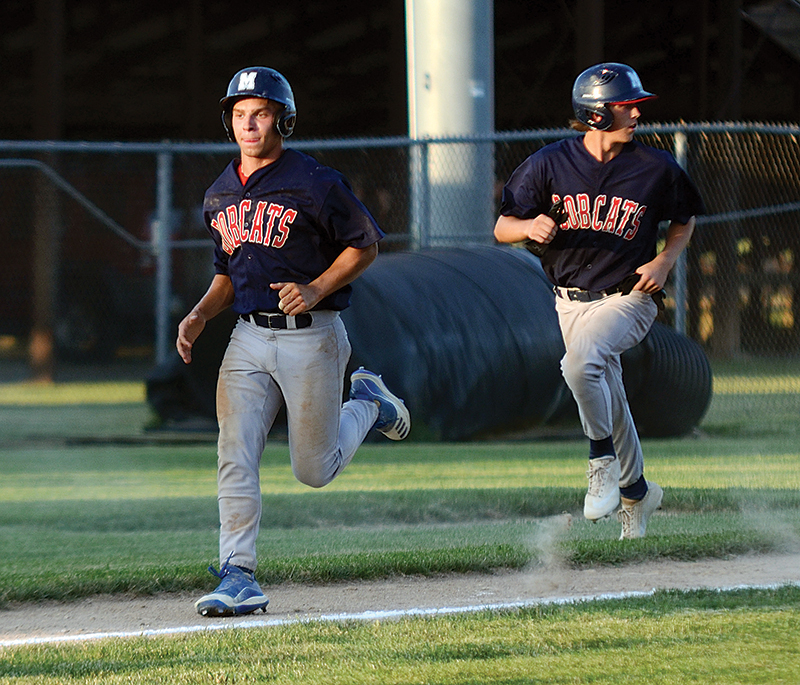 T-R PHOTO BY NOAH ROHLFING - Marshalltown’s Justice Richardson, left, and Jacob Van Pelt dash down the third-base line to score on a Patrick Landeros double during the second game of Wednesday’s doubleheader against Des Moines North. The Bobcats swept the Polar Bears by scores of 10-0 and 8-5.

For such a short season, it’s been a long grind for the Marshalltown Bobcats baseball team. The Bobcats had three wins coming into Wednesday’s action against Des Moines North and lost star senior Joe Harris to an elbow issue for the season last week.

Marshalltown took care of business against the North Polar Bears (1-20) in 10-0 and 8-5 results in the team’s final home contests of the season.

“Anytime you can come out and get two wins in a day that obviously feels good,” Wrage said. “We took care of business tonight, and that feels good. Obviously we could have been cleaner and done better, but you take what you can get.” 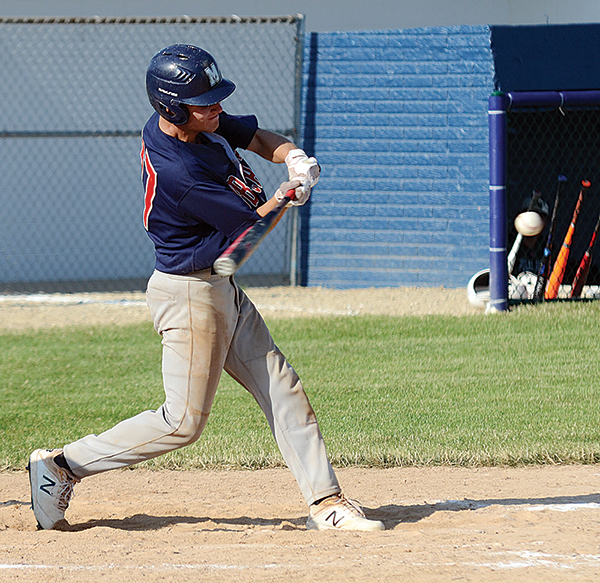 T-R PHOTO BY NOAH ROHLFING - Marshalltown’s Nick Rebik makes contact at the plate during the first game of Wednesday’s doubleheader.

Game one of the doubleheader was routine — The Bobcats were in control from the bottom of the first inning when they scored two runs to take an early lead.

In the third inning, Marshalltown made the score 4-0 with two more runs coming in.

Pitcher Bennett Hageman threw a shutout complete game and the Bobcats did not commit an error on defense.

Up 5-0 heading into the bottom of the fifth inning and needing five runs to end the game early, Marshalltown plated three quick runs to put it within reach. Senior Patrick Landeros stepped up to the plate with two outs and runners on first and second. Clapping a double into the outfield, he brought in both to seal the win.

Landeros brought home the first two runs of game two as well on another double. Wrage was complementary of Landeros’ performances since Harris was ruled out. 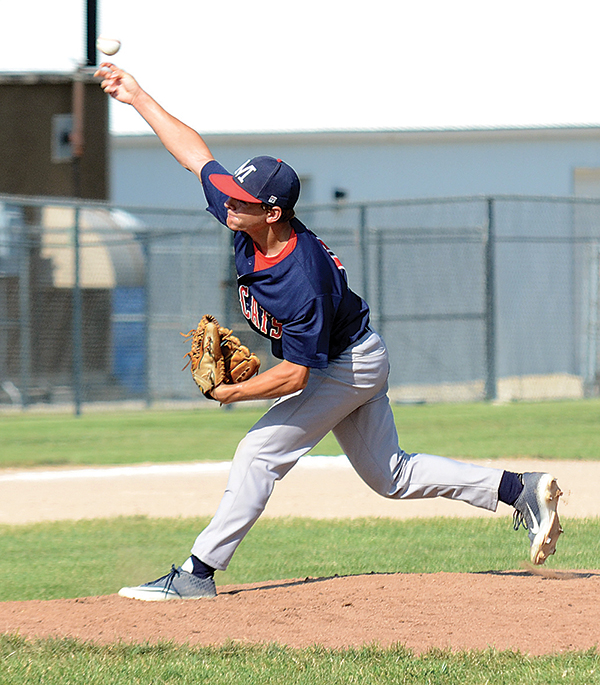 “He was not in the starting lineup Opening Day,” Wrage said. “That just goes to show how much work he’s put in, how much effort he put in. He’s the guy showing up early, getting his work in, taking his at-bats seriously.”

In the fourth inning, there was no scoring, as relief pitcher Tyler Dunham picked up where starter Carson Johnson left off. With the defense playing well (despite picking up four errors), the Bobcats added four insurance runs to build a 6-1 cushion.

North fought back with three runs in the top of the sixth inning to get within two, but once again the Bobcats added insurance runs to seal their second sweep of the season. Landeros got the save in the seventh inning.

It’s been a long season for the Bobcats, but Wrage said the team is starting to pick up things they didn’t at the start of the year.

“The things that we work on in practice, you kinda see them working out for us in games now,” Wrage said. “That’s nice to see. Obviously, we wish we could have seen it sooner, but you can see improvement.”

Marshalltown travels to Urbandale Friday afternoon for a doubleheader beginning at 5 p.m.

T-R PHOTO BY NOAH ROHLFING – Marshalltown’s Nick Rebik makes contact at the plate during the first game of Wednesday’s doubleheader.

T-R PHOTO BY ROSS THEDE – Marshalltown junior pitcher Kailee Pollard delivers to the plate during the third inning of Wednesday’s softball game against Des Moines North. Pollard was perfect for 3 2/3 innings and eventually earned her second win of the season, allowing two unearned runs on three hits and a walk while striking out four in four innings.

T-R PHOTO BY NOAH ROHLFING – Marshalltown’s Justice Richardson, left, and Jacob Van Pelt dash down the third-base line to score on a Patrick Landeros double during the second game of Wednesday’s doubleheader against Des Moines North. The Bobcats swept the Polar Bears by scores of 10-0 and 8-5.