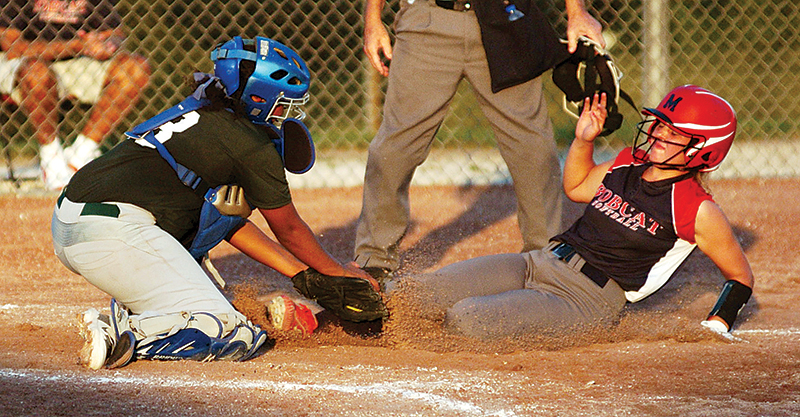 It felt like as much of a victory to simply play the last home game as it did to win it.

Marshalltown High School head softball coach Jim Palmer held both accomplishments in the same regard after Wednesday’s 12-2, five-inning victory over Des Moines North closed out the Bobcats’ home slate just three and a half weeks after the season started.

The continual threat of having the softball campaign suspended or canceled because of COVID-19 weighed heavily on Palmer and his coaching staff throughout the summer, but the Bobcats reached the finish line for hosting games and keeping their venue in playing shape.

“There’s teams around the state just dropping like flies right now and we talk about it everyday with these ladies, about being safe when they’re not with the team,” Palmer said. “We as coaches, it’s been a lot of extra work on us making sure our site’s sterilized and balls are constantly sterilized and protected. So we’ve done everything we could here and we’re very fortunate right now to get this game in and we’re going to keep playing that way.”

Marshalltown (2-17) made the most out of its home-field finale, handing the Polar Bears (0-18) their 18th run-rule defeat of the season. But North gave Palmer a moment of pause after he had helped the Polars prolong the game a couple innings. 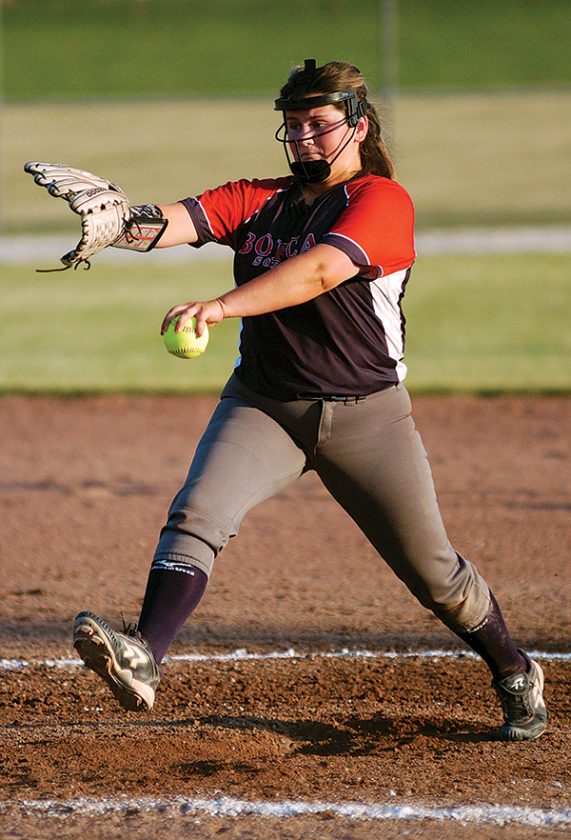 T-R PHOTO BY ROSS THEDE - Marshalltown junior pitcher Kailee Pollard delivers to the plate during the third inning of Wednesday’s softball game against Des Moines North. Pollard was perfect for 3 2/3 innings and eventually earned her second win of the season, allowing two unearned runs on three hits and a walk while striking out four in four innings.

The Bobcats were in prime position to put away the game in just three innings, leading 10-0 with a runner on third base and only one out. Palmer instructed Erica Johnson to leave the base early and she was called out, and Madi Finch followed suit after her subsequent single.

It put an end to Marshalltown’s eight-run at-bat in which it sent 11 batters to the plate. The Bobcats had five singles in the inning while making the most of three walks and four North errors. Avery Mull had a single, Jadyn Palmer blooped an RBI single and Johnson’s single drove in another. Paige Wertzberger would have added to the tally but her line drive to left was nullified when Finch left the base early.

A 12-run lead after three innings would have ended the game by the mercy rule, but coach Palmer had intentions of giving some of his reserves the opportunity to play in their home finale.

“That was the goal,” he said. “My seniors were a little mad because I just didn’t let them run-rule in the third because I had minds for teammates to get them in the game. It means a lot going into regionals trying to get some players some playing time because you just never know what can happen.”

Des Moines North capitalized on the chance, taking advantage of a pair of Bobcat errors and piecing together back-to-back hits to score twice and cut into Marshalltown’s still-comfortable advantage. Jocina Shelton was the first Polar Bear to reach base against MHS left-handed pitcher Kailee Pollard, advancing all the way to second base after a pair of errors on her grounder. 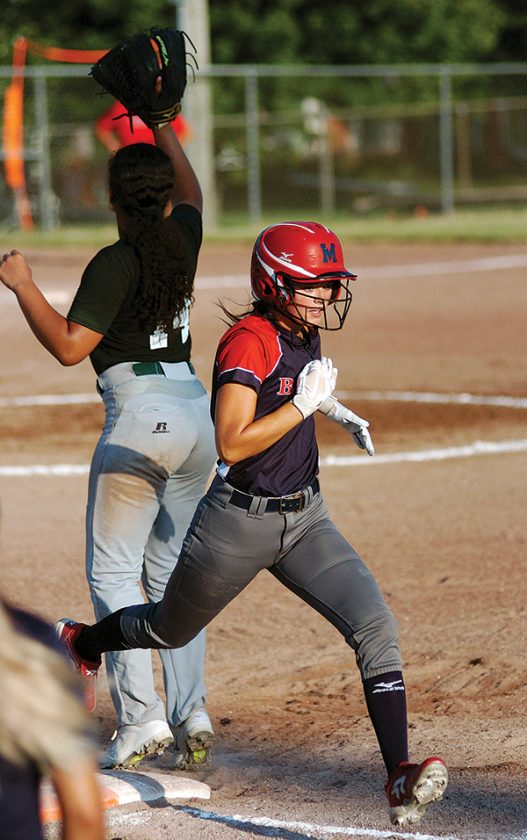 Amora McDonald followed with North’s first hit, a single up the middle, and Bri Shelton drove both runners home with a double to the gap in left.

“Hitting’s contagious and I take my hat off to North, those girls were loud the whole time over there and supporting one another and that means a lot to players,” coach Palmer said. “We talk about that all the time on this team too.”

Marshalltown got those two runs back in the next at-bat without the benefit of a hit. Autumn Finch was hit by a pitch, Pollard reached on an error, and both Ava Augustine and Kyra Feldman walked. Wild pitches allowed both Finch and courtesy runner Khloe Shipley to score before North dodged further damage with a 1-3-2 double play to retire Mull at first and Augustine on a play at the plate.

North’s first two batters in the top of the fifth reached base, but Mull took over in the pitcher’s circle for Pollard, withstood an error and left the bases loaded to end the game.

“I had all my faith in Kailee but her drop ball started going away and they started hitting that pretty well,” coach Palmer said. “At that point I said I just need to bring in somebody who comes in with a little more speed, a little harder to catch. 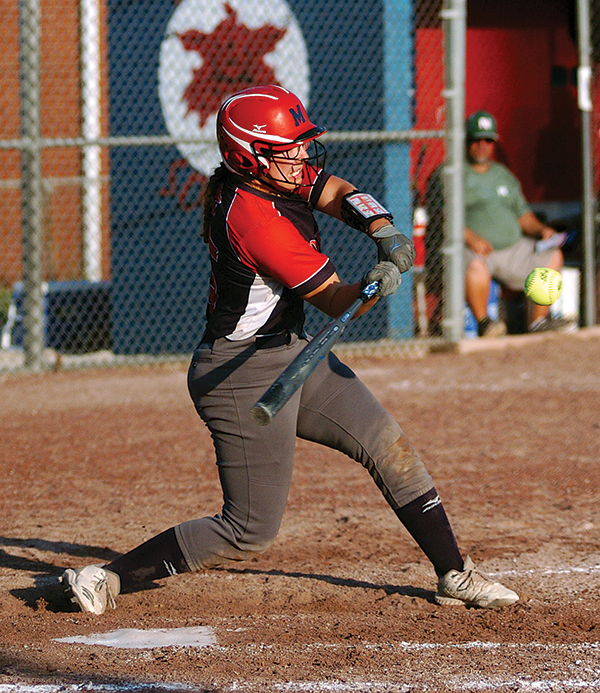 “I talked to the girls after the game about how we have to not let other teams have that kind of momentum because that momentum can just roll and you never know what can happen.”

Pollard earned her second win of the season, allowing two unearned runs on three hits and one walk while striking out four, and Mull got the last three outs including a strikeout.

Mull also led Marshalltown at the plate, going 2-for-3 with a run and an RBI. Himes and Feldman both singled and scored twice, and the Bobcats stole a total of seven bases.

Only two of the Bobcats’ 12 runs were earned to Shelton as the Polar Bears committed six errors. Four runs scored on wild pitches, three came across on errors and two more scored on passed balls.

Marshalltown’s 12 runs was a season high and the most the squad has scored since sweeping North last summer in Des Moines, 13-3 and 15-1. 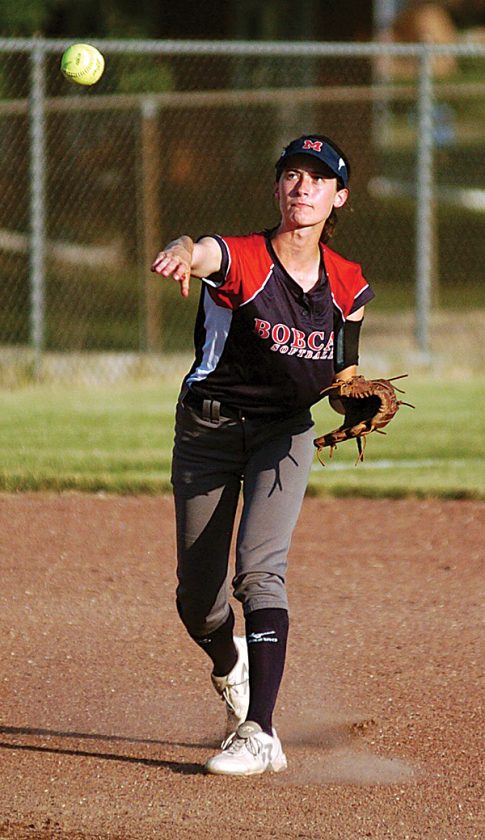 “It’s a good way to end the home venue for us, it’s nice to get a ‘W’ out of that,” coach Palmer said. “We had to have a lot of patience up there in the batter’s box and we struggled with that early in the game, but we started coming back and timing it a lot better.”

The Bobcats go on the road for the remainder of the summer, starting with Friday’s doubleheader at Urbandale. Marshalltown travels to Des Moines Hoover on Monday for two, and Cedar Falls hosts MHS in their Class 5A regional opener on July 16 at Robinson-Dresser Sports Complex. It will be the Tigers’ first game since June 25 after their season was suspended by a player testing positive for COVID-19.