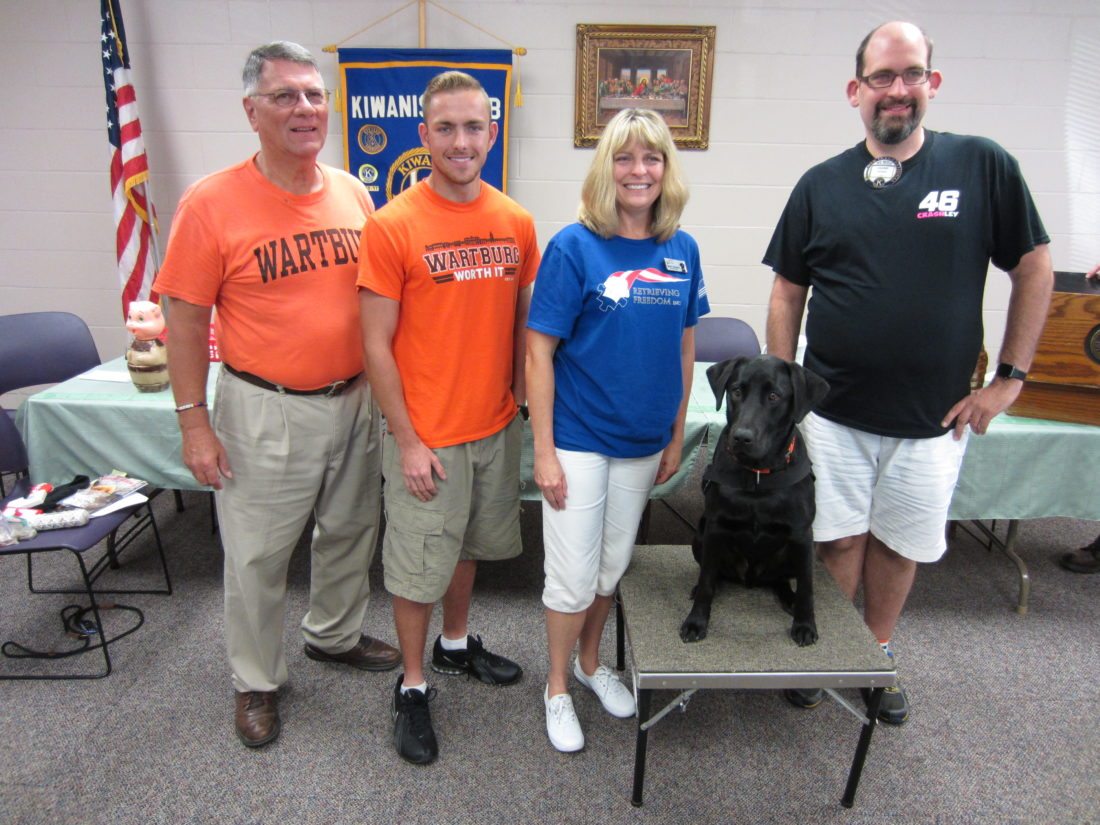 CONTRIBUTED PHOTO Matins Kiwanis members Alan Hilleman and Frank Moran welcome Marit Beisner and her son Luke along with their Black Lab, Victor, as they presented a program on Retrieving Freedom program for the training of therapy and service dogs that is closely working with Wartburg College.

Matins Kiwanis met Thursday morning at 6:30 a.m. in the Salvation Army building and were greeted by Andy Schwandt. After the Pledge of Allegiance and invocation the buffet breakfast was served with Paul Heckman and Ray Goodman. A Token Fine was paid by Frank Moran and Happy Dollars donated from Steve Bolar, Joe Ludley, Alan Hilleman and Moran. Schwandt gave an update on the upcoming Funnel Cake outing in West Des Moines.

Program Host Hilleman introduced Marit Beisner as the guest speaker. Beisner and her son Luke spoke to the group about the Retrieving Freedom program. Retrieving Freedom has a goal of educating the public about what is involved in the training of Therapy and Service Dogs and work closely with Wartburg College. They brought in their Black Lab, Victor, to demonstrate the amazing discipline these animals have, and how they can be utilized. The dogs are bred locally and raised from a pup to 2-years-old and can be kenneled no more than two hours at a time. They graduate about two dogs a month from the program and the dogs are introduced to their recipients after the recipient has pledged a great deal of time volunteering and engaged in public awareness activities. The recipients receiving the dogs are found nationwide and have greatly benefited from living with these animals. Nationwide there are 22 veterans a day taking their own life and these dogs can literally be a life saver. The dogs have also helped families that have an autistic child and are so helpful in easing the anxieties involved with the disorder. Questions were raised and answered and the meeting adjourned by Moran.