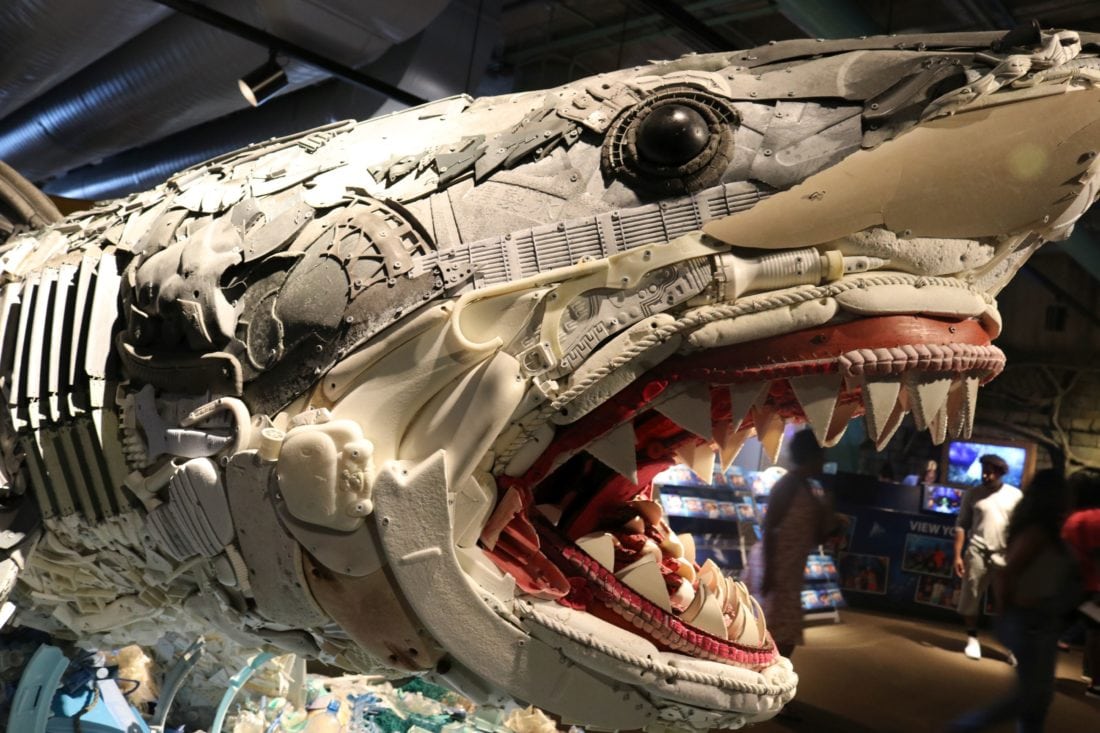 In this photo taken July 26, 2018, the front third of "Greta the Great White Shark," one of six huge sea-life sculptures from a project called Washed Ashore: Art to Save the Sea, is viewed at the Audubon Aquarium of the Americas in New Orleans. (AP Photo/Janet McConnaughey)

NEW ORLEANS — Huge sculptures of sea life are dotted about New Orleans’ aquarium and zoo , all of them made from plastic trash that washed ashore. There’s a great white shark made partly of bottle caps and beach toys and a jellyfish made mostly of cut-up water bottles.

The artwork, part of a project called Washed Ashore : Art to Save the Sea, is the creation of Angela Haseltine Pozzi, who started making the pieces after seeing plastic heaped by the waves onto Oregon’s southern coast. Pozzi was in the town of Bandon, where her grandparents had lived, mourning her first husband’s death.

“I’d known its beaches all my life,” she said. “I went to the ocean to heal and found that the ocean needed healing.”

She wants the scale of her creations to make people realize just how much plastic gets into the ocean — and to act on that knowledge. Signs next to each piece suggest simple ways to reduce the problem, such as not using plastic straws, re-using water bottles, and picking up other people’s litter.

“Every piece of trash picked up and properly disposed of is a piece that will not cause harm to local environments and animals,” states the sign for “Greta the Great White Shark.”

Pozzi’s aim is art that is “beautiful, and a little horrifying.”

An army of volunteers in Oregon — about 10,000 since Pozzi started in 2010 — help her collect, prepare and assemble the beach trash into art. One of their wash-basins for plastic is a bathtub also found on the beach.

She now has more than 70 pieces in three exhibitions currently traveling the U.S., and has requests from overseas.