Wool wrap for royal baby suggests tradition will win out 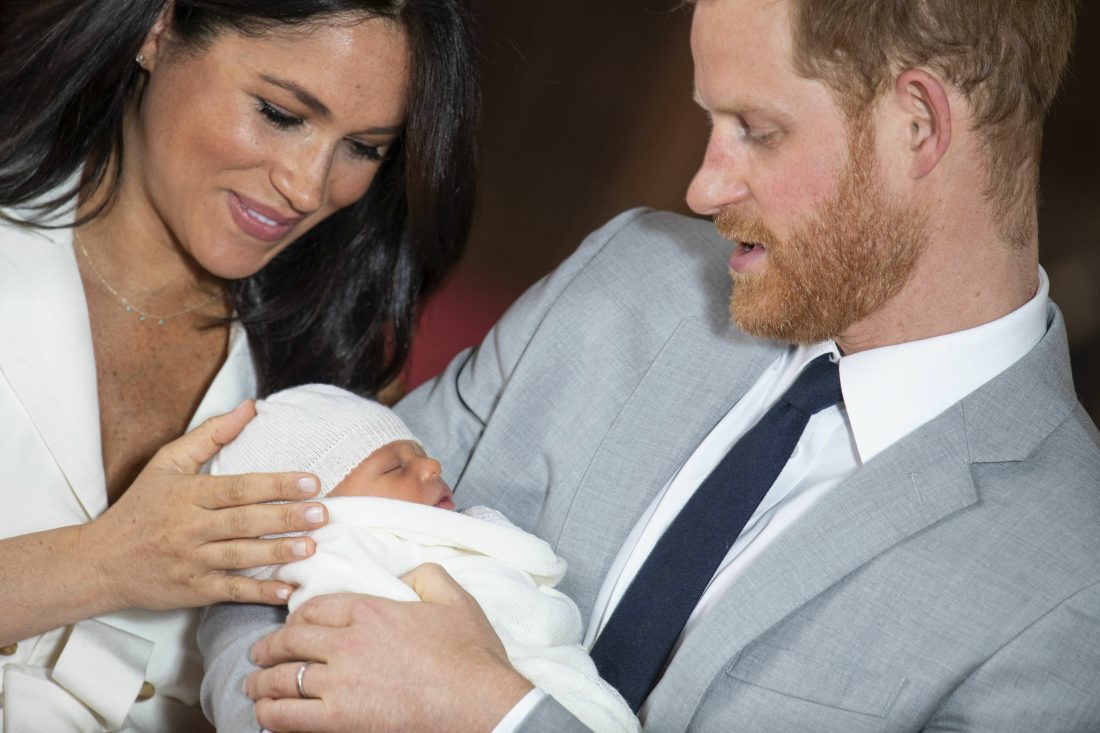 Britain's Prince Harry and Meghan, Duchess of Sussex, during a photocall with their newborn son, in St George's Hall at Windsor Castle, Windsor, south England, Wednesday May 8, 2019. Baby Sussex was born Monday at 5:26 a.m. (0426 GMT; 12:26 a.m. EDT) at an as-yet-undisclosed location. An overjoyed Harry said he and Meghan are "thinking" about names. (Dominic Lipinski/Pool via AP)

LONDON — Archie Harrison Mountbatten-Windsor slept through his first press conference, but royal experts say the merino wool wrap in which he snuggled said a lot about how his parents, Prince Harry and Meghan, the Duchess of Sussex, will approach his future.

Meghan, a former TV star, is known for promoting social causes and niche brands with her clothing choices. Yet she and Harry introduced their son to the world Wednesday in a hand-finished shawl and cashmere cap made by G.H. Hurt & Son of Nottingham, whose intricate knitwear has swaddled royal babies for decades.

Wrapping Archie in a shawl knitted by the small, family-run English company suggests that Meghan and Harry aren’t as intent on shaking up the royal family as much as some people have forecast — or feared.

“I read this as an attempt to reassure the public that they are not going to stray too far from tradition,” said Pauline Maclaran, co-author of “Royal Fever: The British Monarchy in Consumer Culture.” ”There has been a lot of press recently taking a slightly negative tone about Meghan, and this is an opportunity to show that she’s not trying to change everything.”

Princess Diana wrapped Harry and his older brother, Prince William, in G.H. Hurt. William and his wife, the Duchess of Cambridge, chose the firm for Prince George, Princess Charlotte and Prince Louis.

The royals don’t advertise, but they do set trends with whatever they are wearing, seeing or doing. Whether it was Queen Victoria popularizing Christmas trees or Princess Diana’s fluffy collars, people have long tried to copy or emulate their style.

These days, the royal effect is turbocharged by social media. The internet offers fans the opportunity to examine royal fashions in minute detail, to look at the fine stitching on a baby blanket and identify it instantly. Websites such as whatkatewore.com and whatmeghanwore.net quickly identify designers of the outfits they are wearing and tell their stories.

Susan Kelley, the American founder of whatkatewore.com, said the public’s fascination with Meghan will likely trickle down to her son. And as a former actress, she has a great sensitivity to the messages sent by her sartorial selections.

“Meghan is somebody who wants to carve her own path, but she is respectful of the monarchy and traditions of it,” Kelley said. “The fact that Meghan is a feminist doesn’t mean she doesn’t honor tradition.”

The company saw traffic on its website increase immediately after pictures of young Archie hit the news. In less than an hour, 266 visitors had looked at the shawl, up from five to 10 a day previously.

The firm, which has been in business since 1912, has a collection of vintage hand-frame knitting machines that date back hundreds of years and work alongside modern knitting technology.

“Babies at the best of times are wonderful news and they are wrapped up with so much emotion and goodwill,” said Richard Taylor, part of the family firm. “But from a business point of view … we get coverage right around the world.”