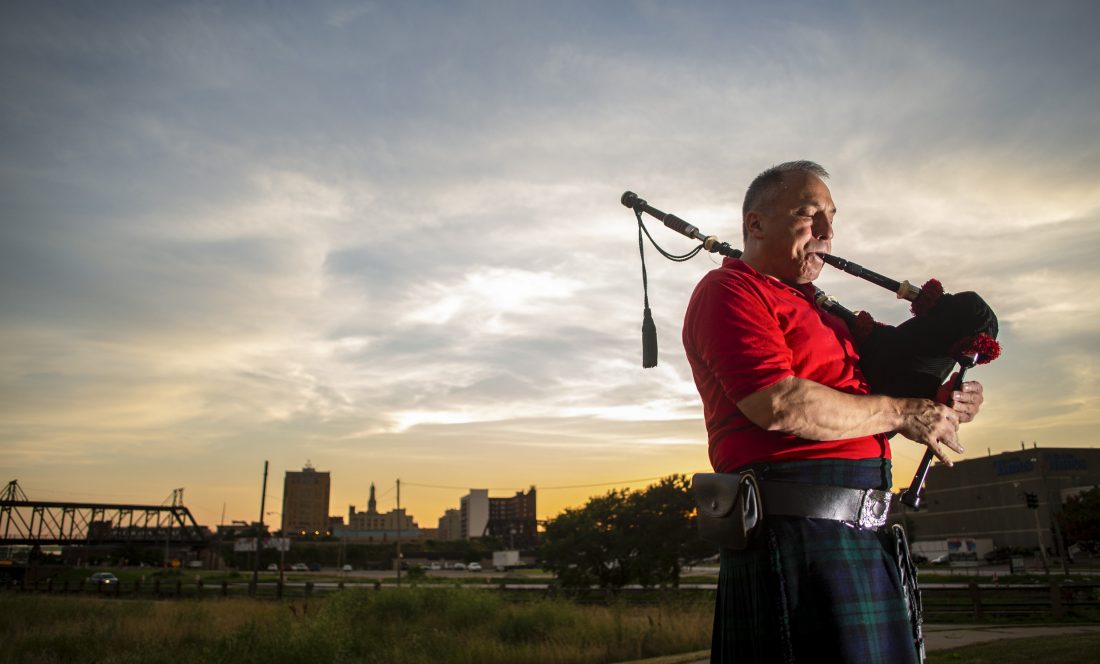 DAVENPORT — A sound reminiscent of the Scottish highlands began filling the Mississippi riverfront when floodwaters subsided in June.

Early on, when River Drive was still closed and the riverfront was otherwise quiet, the sound of bagpipes could often be heard drifting down the Mississippi. The source was a musician, new to the area, who plays both bagpipes and other musical instruments.

Philadelphia native David Cohen was drawn to the Quad-Cities because of the river, and in early January he relocated to Davenport. Now, weather permitting, Cohen enjoys spending his evenings playing bagpipes along the river.

Along with playing the bagpipes, Cohen is also known for playing Flamenco music on the guitar, the Chinese Pipa (a stringed instrument), and the Oud (a Middle Eastern instrument).

“I’ve always liked the bagpipes, and then at one point I woke up and I just said, Why am I not playing the bagpipes?'” Cohen told the Quad-City Times.

He spoke to a Scottish organization close to Philadelphia, and they taught him how to play the bagpipes. He then joined their band and traveled to Scotland to continue studying the instrument, Cohen said.

And his music is not just recreational; Cohen also plays music at local hospitals for patients and their families.

Though he plays a variety of instruments, his love of music started with the guitar. When he was growing up, Cohen’s mother would listen to Mexican folk music that was heavily laden with guitar, he said. From the moment he heard the music, he wanted to learn how to play the instrument.

“I’ve always loved the guitar, and then at one point I realized I wanted to make my living playing the guitar, and that’s something I had to learn how to play,” Cohen said. “So I started studying music, and from there I went on.”

Since moving to Davenport, Cohen has been focused on his music career and looking for venues to play. He has yet to find a consistent venue in Davenport, but still travels around the Midwest to gigs, Cohen said. He is set to play at the Freight House Farmers Market on Aug. 18.

“Flamenco chose me,” Cohen said. “I mean, I gravitated toward Flamenco because I love it. But it chose me because it allowed me the opportunity to understand it and perform and interpret it.”