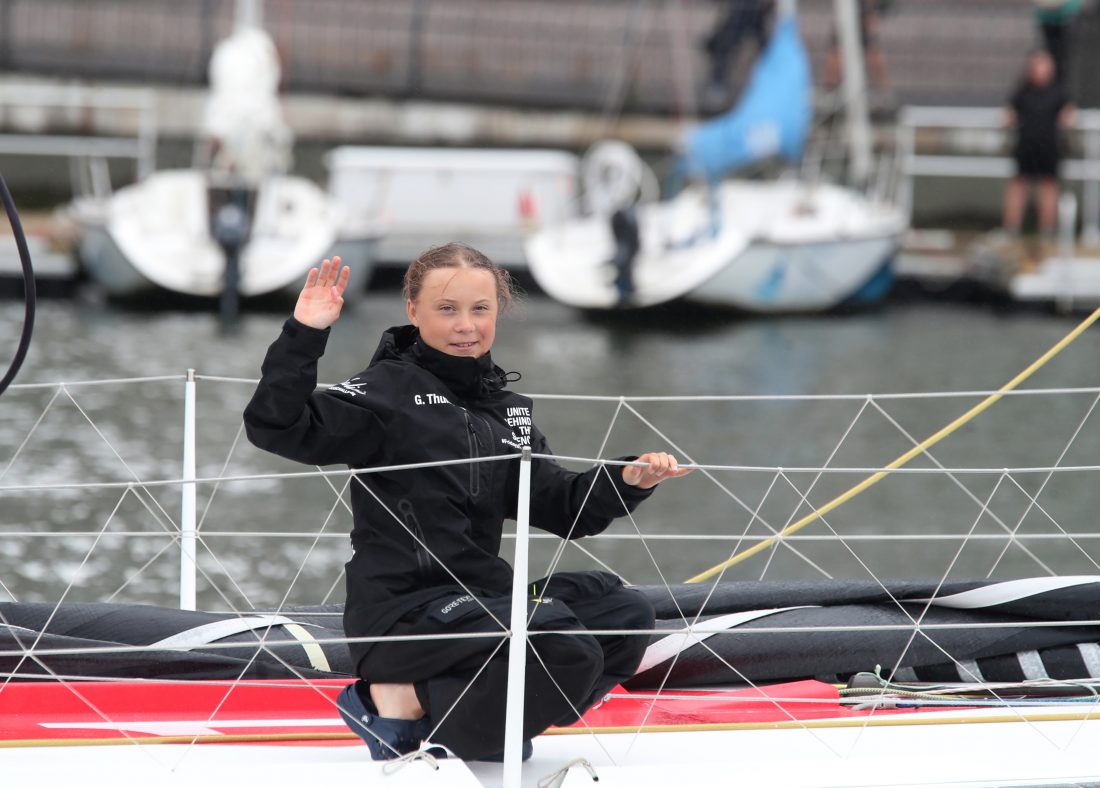 Thunberg, 16, and her crew were escorted into a lower Manhattan marina at about 4 p.m., concluding a two-week crossing from Plymouth, England. Hundreds of activists gathered on a Hudson River promenade to cheer her arrival.

Thunberg waved, was lifted onto a dock, then took her first wobbly steps on dry land.

“All of this is very overwhelming,” she said of the reception, looking slightly embarrassed.

The teenager refused to fly because of the carbon cost of plane travel. A 2018 study said that because of cloud and ozone formation, air travel may trap two to four times more heat than that caused by just emissions of carbon dioxide and other greenhouse gases.

Speaking to reporters after she landed, Thunberg said the trip wasn’t as uncomfortable as she expected. She didn’t get seasick once, she said. But she stressed that “this is not something I want everyone to do.”

“It is insane that a 16-year-old would have to cross the Atlantic Ocean to make a stand,” she said. “The climate and ecological crisis is a global crisis, the biggest crisis that humanity has ever faced, and if we don’t manage to work together and to cooperate and to work together despite our differences, then we will fail.”

Thunberg has become a symbol of a growing movement of young climate activists, leading weekly protests in Sweden that inspired similar strikes in about 100 cities worldwide.

She’s in New York to speak at the United Nations Climate Action Summit next month. There, she’ll join world leaders who will present plans to reduce greenhouse gas emissions.

This was no pleasure cruise. The Malizia is built for high-speed, offshore racing, and weight is kept to a minimum. There is no toilet or fixed shower aboard, no windows below deck and only a small gas cooker to heat up freeze-dried food.

The sailboat’s onboard electronics are powered by solar panels and underwater turbines.

Thunberg, the daughter of an actor and an opera singer, became a European celebrity last year when she refused to go to school in the weeks before Sweden’s general election to highlight the impact of climate change.

She continued her school strike on Fridays after the election, spurring thousands of young people to follow suit. Since then, she’s met the pope, spoken at Davos and attended anti-coal protests in Germany.

She is now taking a year off school to pursue her activism.

Thunberg was asked upon her arrival in New York whether she had a message for U.S. President Donald Trump, a climate change skeptic.

“My message for him is just: listen to the science,” she said. “And he obviously doesn’t do that. So as I always say to this question: If no one has been able to convince him about the climate crisis, the urgency, then why should I be able to do that? So I am just going to focus on spreading awareness.”