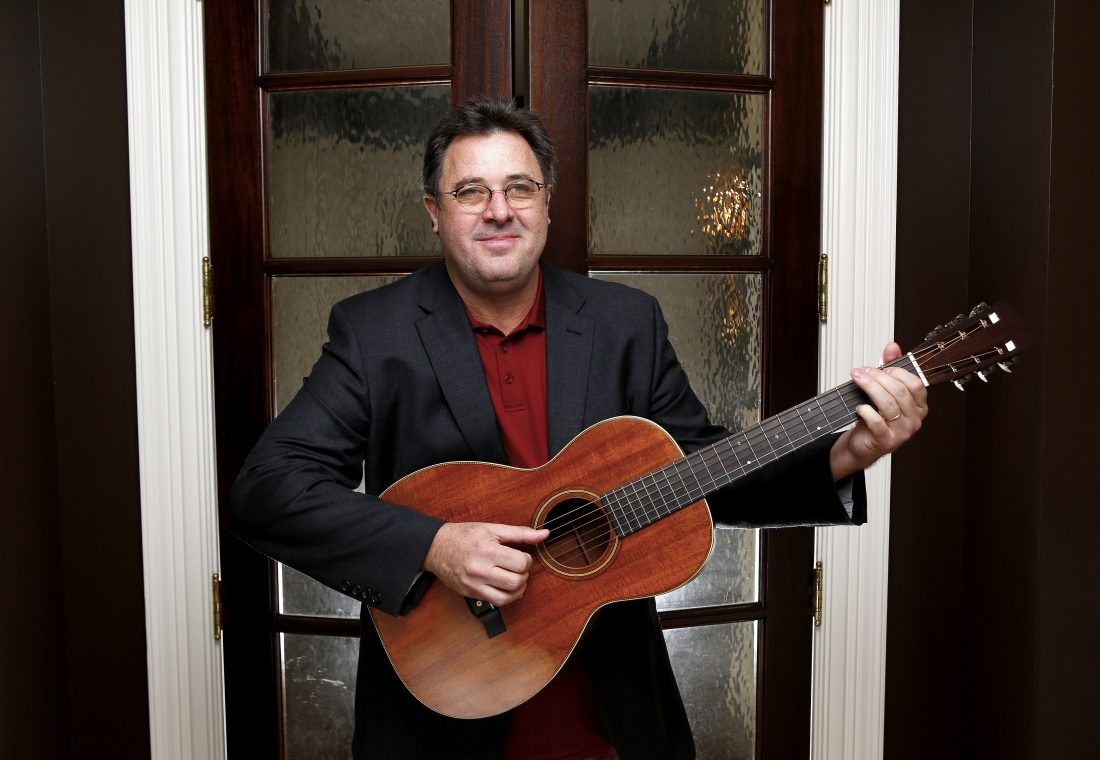 FILE - In this Feb. 1, 2016 file photo, Vince Gill poses for a photo at his home in Nashville, Tenn. Gill doesn’t hold back on weighty topics of regret, faith, his marriage and sexual abuse on his new record “Okie” coming out on Aug. 23, 2019. The Grammy-winner admitted to breaking down in the studio as he sang a song for his wife, Amy Grant, but he said there’s a lot of emotion tied up his songs, some of which he waited a lifetime to write and record. (Photo by Donn Jones/Invision/AP, file)

NASHVILLE, Tenn. — Vince Gill might make people break down in tears when they listen to his vulnerable new record in which he sings about regret, marriage, faith, sexual abuse and hard choices. But then again, so did he.

When the country singer recorded his song “When My Amy Prays,” about his relationship with God through his wife Amy Grant, he choked up. His normally pristine tenor voice faltered. He decided to leave it as is.

“I don’t so much anymore feel like I want to get impressed by music as much as I want to get in it and be moved,” said the 21-time Grammy winner at his home in Nashville after finishing a recent European tour with The Eagles. “There’s a lot of life tied up in these songs and it gets somewhat emotional sometimes.”

“Okie,” out Friday, is one of his most personal and honest albums in years, full of songs that he waited a lifetime to write and record. Forty years into an unprecedented career, 62-year-old Gill has always been known for his emotionally wrought performances of songs like “Go Rest High on That Mountain,” written after the death of his brother, or heart-wrenching love songs like “Whenever You Come Around.” But “Okie” reveals a lot about Gill’s core truths, whether it’s spiritual or life lessons or wisdom he’s gained from other songwriters like Guy Clark and Merle Haggard.

“These days it’s awful hard to get a fair assessment of what truth is,” Gill said. “Because people are afraid to tell the truth sometimes because they’ll get barbecued for it, you know. And that’s no way to live. It’s no way to be.”

One of the most striking songs on the album is “Forever Changed,” about child sexual abuse. Gill doesn’t assume he knows what that is like, but he said he was inspired by an experience he had as a seventh-grade kid.

“I was on the basketball team and the basketball coach, the gym teacher called me into his office,” Gill said. “I’m sitting on his desk and the hand goes on my leg and it goes further and further up.”

Gill said he ran away and nothing further happened, but he thought about it a lot and kept trying to find the right words. “Sometimes the innocent don’t have a voice,” said Gill. “When you’re a kid and somebody is abusive to you, you don’t know how to handle it. You don’t know how to deal with it.”

He sang the song when he was rehearsing for a show years ago and a woman in his band heard it and ran off the stage crying.

“She came to me later and said, ‘How did you know that’s my story?'” Gill said.

On “What Choice Will You Make,” Gill writes from the perspective of a woman abandoned and shunned because of an unplanned pregnancy, and he asks the listener to just empathize. In a time when women’s reproductive choices are highly politicized, he just wanted to put people in her shoes when no answer seems like the right one.

“Its intent is not me telling you what you should or shouldn’t do,” he said. “I like seeing it be told in the hands of kindness, rather than the hands of judgment.”

Gill’s learned a lot about leading with kindness and his own faith from his wife, the Grammy-winning contemporary Christian music star. Gill didn’t grow up in the church, but he thinks most people assume him to be “a Bible thumper” because of his wife. But he said he’s just striving to be a good person and treat all people with respect.

Charlie Worsham is one of many young country artists that Gill has taken under his wing over the years and they wrote a song together on the album called “Black and White,” which questions the nostalgia for so-called simpler times when the country today seems so divided.

“I got to bear witness to someone with a good heart and with a sharp mind be able to put, so eloquently into three minutes, what I think a lot of people are carrying in their hearts right now,” Worsham said, “no matter what their political beliefs are.”

Even if the album feels weighty in its topics, Gill wants to lift people up with his songs.

“There’s a glimmer of hope in some of these songs,” he said. “I think if you don’t have any hope, then you’re lost.”