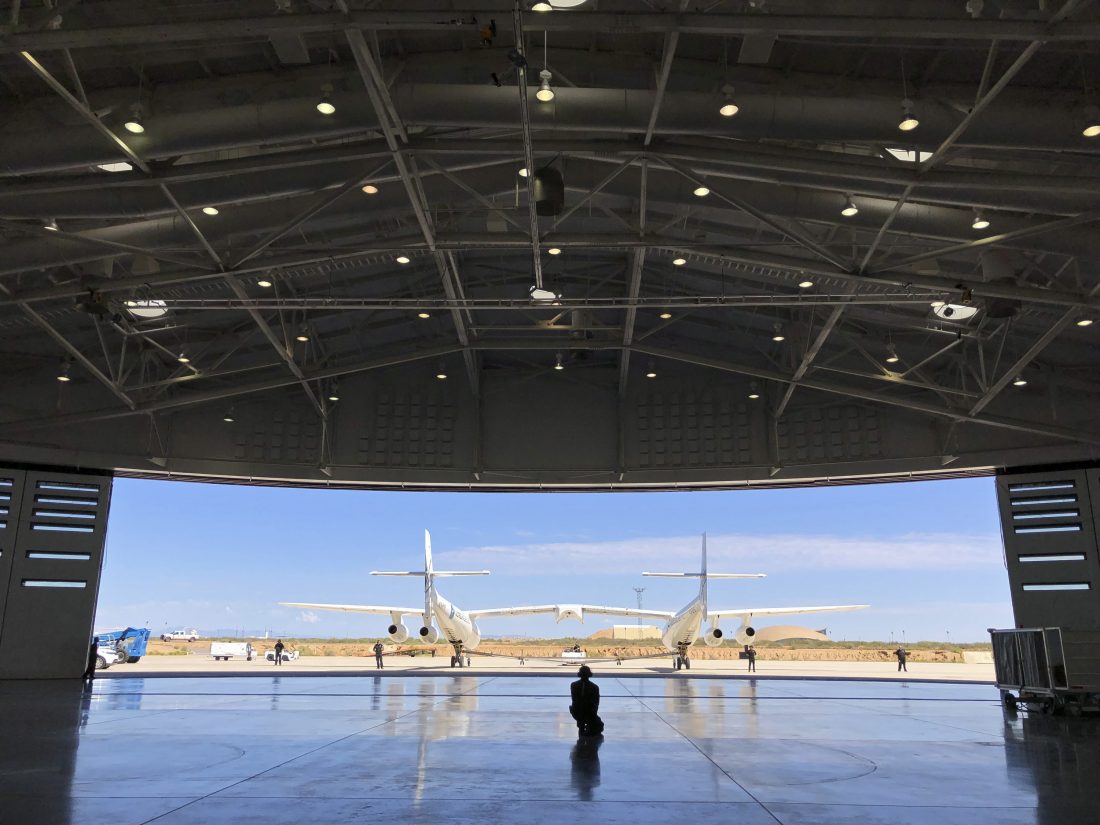 Virgin Galactic ground crew guide the company's carrier plane into the hangar at Spaceport America following a test flight over the desert near Upham, New Mexico, on Thursday, Aug. 15, 2019. The carrier plane is now permanently based at the spaceport after arriving earlier this week. (AP Photo/Susan Montoya Bryan)

UPHAM, N.M. — Spaceport America is no longer just a shiny shell of hope that space tourism would one day launch from this remote spot in the New Mexico desert.

The once-empty hangar that anchors the taxpayer-financed launch and landing facility has been transformed into a custom-tailored headquarters where Virgin Galactic will run its commercial flight operations.

The interior spaces unveiled Thursday aim to connect paying customers with every aspect of the operation, providing views of the hangar and the space vehicles as well as the banks of monitors inside mission control.

Two levels within the spaceport include mission control, a preparation area for pilots and a lounge for customers and their friends and families, with each element of the fit and finish paying homage to either the desert landscape that surrounds the futuristic outpost or the promise of traveling to the edge of space.

From hotel rooms to aircraft cabins, the Virgin brand touts its designs for their focus on the customer experience. Spaceport is no different.

A social hub includes an interactive digital walkway and a coffee bar made of Italian marble. On the upper deck, shades of white and gray speak to Virgin Galactic’s more lofty mission.

Company officials say the space is meant to create “an unparalleled experience” as customers prepare for what Virgin Galactic describes as the journey of a lifetime.

Just how soon customers will file into Virgin Galactic’s newly outfitted digs for the first commercial flights to space has yet to be determined. A small number of test flights are still needed.

“We were the first company to fly a commercial space ship to space with somebody in the back who was not a pilot — first time that somebody like that has been able to get out of their seats and float around the cabin,” Virgin Galactic CEO George Whitesides said. “So it’s happening. We have a bit more work to do before we get to commercial service.”

Billionaire Richard Branson, who is behind Virgin Galactic, and former New Mexico Gov. Bill Richardson, a Democrat, first pitched the plan for the spaceport nearly 15 years ago.