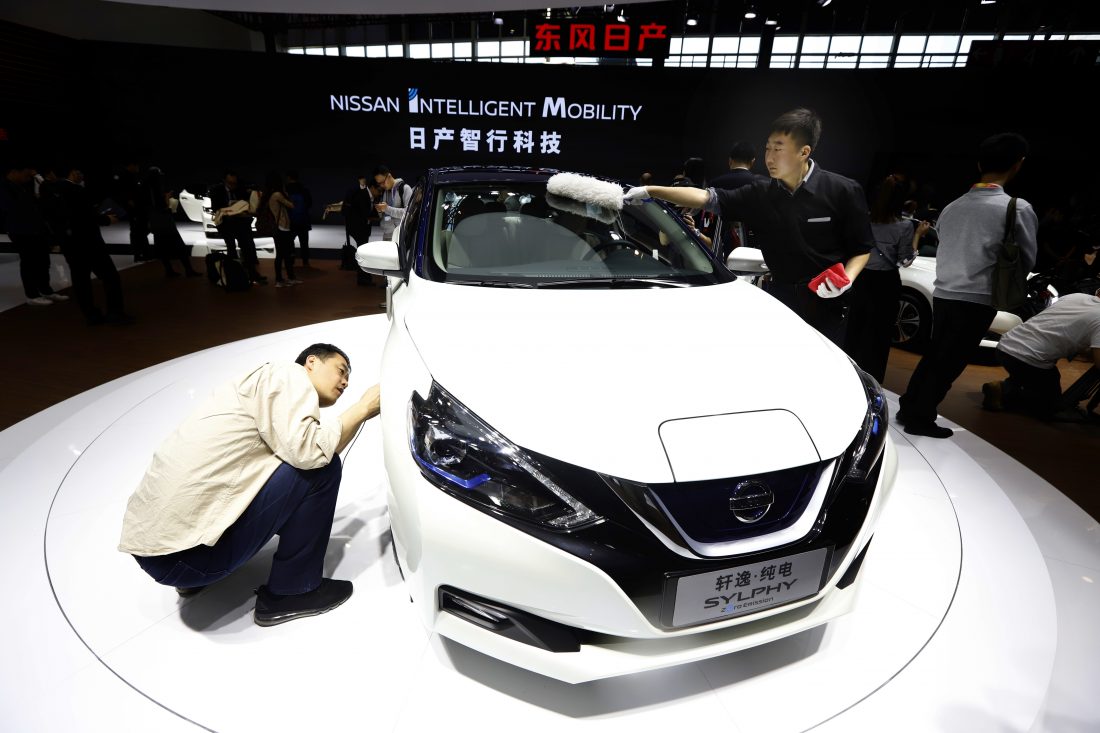 FILE - In this April 25, 2018, file photo, a visitor takes a closer look at the Sylphy Zero Emission during the start of the Auto China 2018 in Beijing, China. The 2019 Shanghai auto show highlights the global industry's race to transform electric cars into a profitable product Chinese drivers want to buy as Beijing winds down multibillion-dollar subsidies that made this country the biggest market for the technology. (AP Photo/Ng Han Guan, File)

Communist leaders are shifting the burden to automakers by imposing mandatory sales targets for electrics, adding to financial pressure on them amid a painful sales slump. Chinese purchases of pure-electric and hybrid sedans and SUVs soared 60% last year to 1.3 million — half the global total — but overall auto sales shrank 4.1% to 23.7 million.

Buyers of electrics were lured with subsidies of up to 50,000 yuan ($7,400) per car, but that support was cut by half in January and ends next year.

Communist leaders have been promoting electrics for 15 years in hopes of cleaning smog-choked Chinese cities and gaining an early lead in a promising industry.

General Motors, Volkswagen, Nissan and other global majors are developing models to suit Chinese tastes. They have money and technology, but local rivals have experience: brands including BYD Auto and BAIC Group have been selling low-priced electrics for a decade.

At the Shanghai show, which opens to the public Saturday, automakers plan to display dozens of electrics, from luxury SUVs to micro-compacts priced under $10,000. They aim to compete with gasoline-powered models on performance, cost and looks.

By the end of next year, “it will be very difficult for a customer to decide against an electric car,” said the CEO of Volkswagen AG, Herbert Diess.

“The cars will offer roominess, space, fast charging,” Diess said during a January visit to Beijing. “They will look exciting.”

Automakers are looking to China, their biggest global market, to drive revenue growth at a time when U.S. and European demand is flat or declining. That gives them an incentive to cooperate with Beijing’s campaign to promote electrics.

This week, General Motors Co. is unveiling the first all-electric model in Buick’s China-only Velite range, which includes a hybrid based on the Chevrolet Volt. VW will display a concept SUV as part of plans to launch 50 electric models by 2025.

Pressure to shift to electrics is “more an opportunity than a threat” to Chinese automakers, said UBS’s Gong.

The ruling Communist Party has spent billions of dollars on research grants and incentives to buyers. State-owned power companies have blanketed China with 730,000 charging stations, a vastly larger network than any other country.

Meanwhile, automakers are struggling to revive sales of traditional SUVS, minivans and sedans that fell last year for the first time in three decades.

A tariff war with Washington and weakening economic growth made jittery consumers reluctant to commit to big purchases. That skid worsened this year. First-quarter sales shrank 13.7% from a year earlier.

Despite that, people in the industry say Chinese sales could top 30 million vehicles a year by 2025.

Global brands are linking up with Chinese partners with experience at low-cost production.

Under the new system, automakers must earn credits for sales of electrics equal to at least 10% of purchases this year and 12% in 2020. Automakers that fall short can buy credits from competitors that exceed their targets.

An electric’s sticker price in China still is higher than a gasoline model. But charging and maintenance cost less. Industry analysts say owners who drive at least 16,000 kilometers (10,000 miles) a year save money in the long run.

China’s biggest SUV brand, Great Wall Motors, has responded to the sale quotas by launching an electric brand, Ola. Its R1 compact, while looks like a toy beside Great Wall’s hulking SUVs, went on sale in December priced as low as 59,800 yuan ($8,950) after the subsidy.

Tesla Ltd. responded by announcing plans to build its first factory outside the United States in Shanghai.

Official ambitions clash with the Chinese public’s love of bulky SUVs, seen as the safest option on crowded, bumpy streets. But sentiments are shifting.