US economy grew at solid 3.1% rate in first quarter 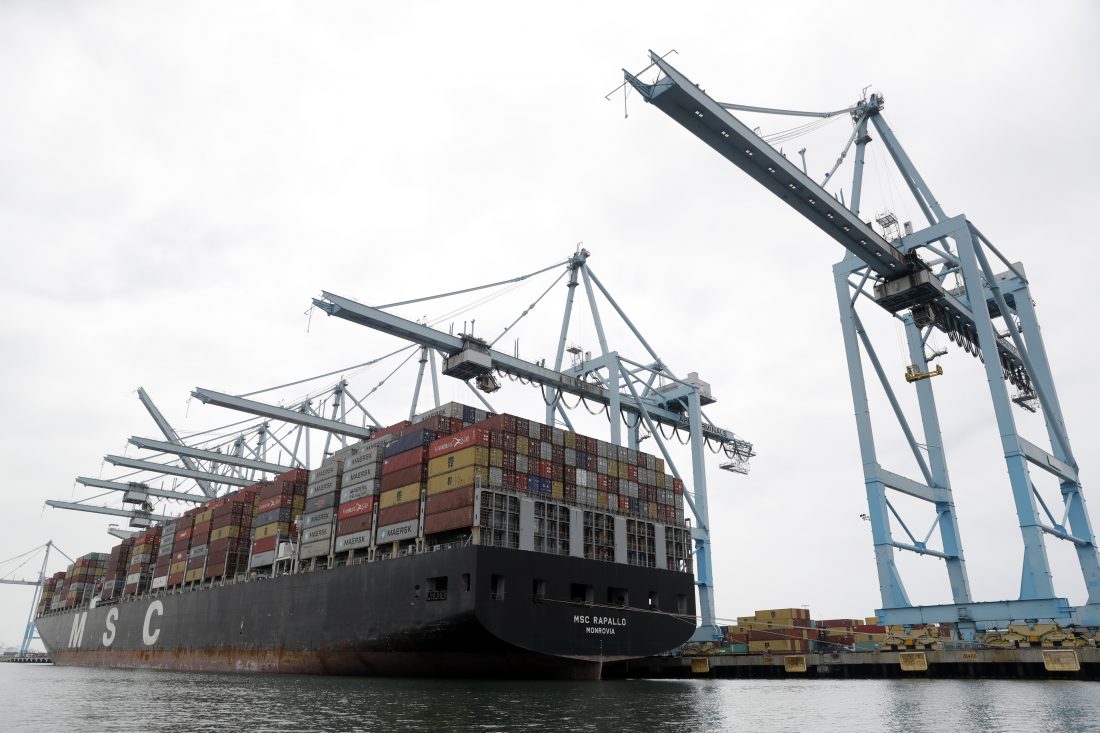 FILE - In this June 19, 2019, file photo a cargo ship is docked at the Port of Los Angeles in Los Angeles. On Thursday, June 27, the Commerce Department issues the third and final estimate of how the U.S. economy performed in the January-March quarter. (AP Photo/Marcio Jose Sanchez, File)

WASHINGTON — The U.S. economy grew at a healthy 3.1% rate in the first three months of this year, but signs are mounting that growth has slowed sharply in the current quarter amid slower global growth and a confidence-shaking trade battle between the United States and China.

The gain in the gross domestic product, the broadest measure of economic health, was unchanged from an estimate made a month ago, the Commerce Department reported Thursday. However, the components of growth shifted slightly with stronger business investment and consumer spending slowing more than previously estimated.

Economists believe growth has slowed sharply in the current April-June quarter to around 2%. They expect similar meager gains for the rest of the year, a forecast that runs counter to the Trump administration’s expectations for strong growth above 3%.

The 3.1% growth in the first quarter marked a rebound from a 2.2% growth rate in the fourth quarter of last year. But it was slower than a sizzling increase of 4.2% in the second quarter and a solid increase of 3.4% in the third quarter last year. For all of 2018, GDP grew 2.9%, the best annual gain since 2015.

Last year’s strength was powered by the implementation of a $1.5 trillion tax cut, President Donald Trump’s signature domestic achievement, and billions of dollars in increased government spending on the military and domestic programs Congress approved in early 2018.

However, the impact of the tax cuts and the higher government spending are expected to fade this year, leaving the economy growing very close to the 2.2% average seen over the 10 years of the current expansion, which will become the longest in U.S. history next month.

Economists at Capital Economics are forecasting that growth will slow to 2.3% this year and even further to 1.2% in 2020 before rebounding a bit to 2% growth in 2021.

Paul Ashworth, the firm’s chief U.S. economist, said that the slowdown from the fading of the tax cuts and increased government spending was being “exacerbated by a dramatic slowdown in other parts of the global economy,” in particular Europe and Japan. Trump’s “trade war with China is also sapping confidence,” Ashworth said.

The Trump administration disputes forecasts of a U.S. slowdown, believing that its economic policies will lift growth to levels of 3% or better over the next six years.

Trump, who is counting on a strong economy as he campaigns for re-election next year, has pushed the Federal Reserve to immediately start cutting interest rates to undo what he sees as the damage from four unnecessary Fed rate hikes last year.

At its meeting last week, the Fed did signal that it was prepared to cut rates if needed to protect the economy from a growing trade dispute between the United States and China.

Trump is scheduled to meet Saturday with Chinese President Xi Jinping at a Group of 20 major nations summit in Japan to see if a way can be found to restart trade negotiations between the world’s two biggest economies.

The trade tensions have increased uncertainty over what higher tariffs on Chinese imports will do to the U.S. economy, resulting in declines in manufacturing activity and a drop in consumer confidence.

Mark Zandi, chief economist at Moody’s Analytics, said if this week’s talks don’t achieve at least a truce in the trade war and Trump carries through with his threats to expand his existing tariffs on $250 billion in Chinese goods to cover virtually all of Chinese imports, that could be enough to trigger a full-blown recession.