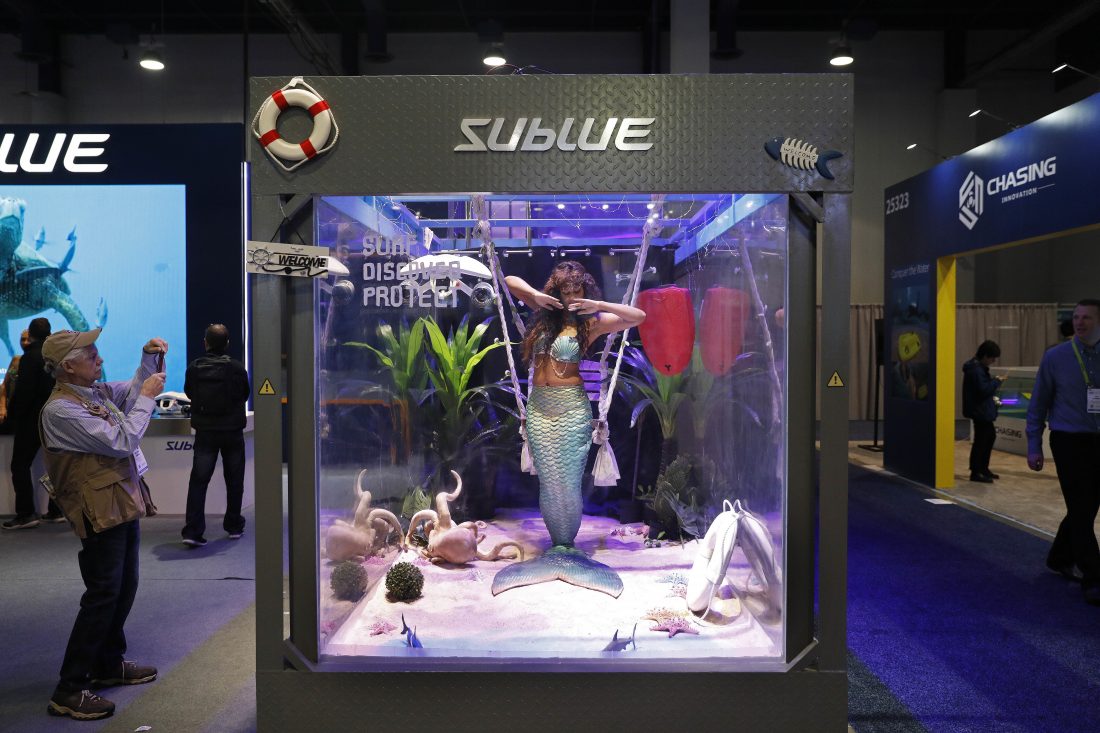 FILE- In this Jan. 9, 2019, file photo a woman dressed as a mermaid performs at the Sublue booth at CES International in Las Vegas.

NEW YORK — The CES gadget show is cracking down on its dress code, introducing more sessions focused on women and minorities and creating a new “sex tech” category after a debacle over a robotic personal massager for women.

The Consumer Technology Association, the trade group that organizes the annual gadget show in Las Vegas, unveiled policy changes Tuesday aimed at addressing complaints that the 52-year-old electronics show is too male-dominated.

The show faced backlash this year after organizers rescinded an innovation award for the massager by the startup company Lora DiCarlo. CES said it reserved the right to rescind awards for devices deemed “immoral, obscene, indecent, profane or not in keeping with CTA’s image.” But Lora DiCarlo criticized the decision as sexist, noting that a sex doll for men was launched at CES just a year earlier. CES later apologized and reinstated the award.

The show was also criticized in 2017 for announcing an all-male lineup of keynote speakers for the second year in a row (two women were added later). That ratio has improved; in 2019 four of the nine keynote speakers were women.

CES reflects the gender diversity problems in the tech industry as a whole. Women and people of color are underrepresented in the tech industry, especially in leadership and technical roles . For example, less than a third of Google’s employees are women and less than a quarter of its tech employees, such as engineers, are female. The numbers are similar at other big tech companies. Though the companies are throwing a lot of money and effort at improving diversity, the numbers are barely budging.

To further promote diversity, CES is introducing a new “Innovation for All” programming track featuring sessions with senior diversity officials. It’s offering grants and free exhibit space to women and underrepresented entrepreneurs. And it’s working with The Female Quotient, a group that advocates for gender equality, to host a lounge with panel discussions about gender equality.

CES also says it will strictly enforce a dress code banning booth personnel from wearing clothing that is “sexually revealing or that could be interpreted as undergarments,” regardless of gender. For the first time it is introducing penalties for those who violate the dress code. After a warning, a booth found in violation will be docked “priority points,” which are based on seniority and allow vendors access to the best show locations.

Karen Chupka, executive vice president of CES, said CES worked with external advisers and partners to update and improve existing CES policies. She said organizers are “committed to evolving and continuing to create an experience at CES that is inclusive and welcoming for everyone.”

As for sex toys, CES is introducing a new “sex tech” category as a one-year trial. Chupka said tech-based sexual products would have to demonstrate advancements in technology and not just be “standard vibrators.”