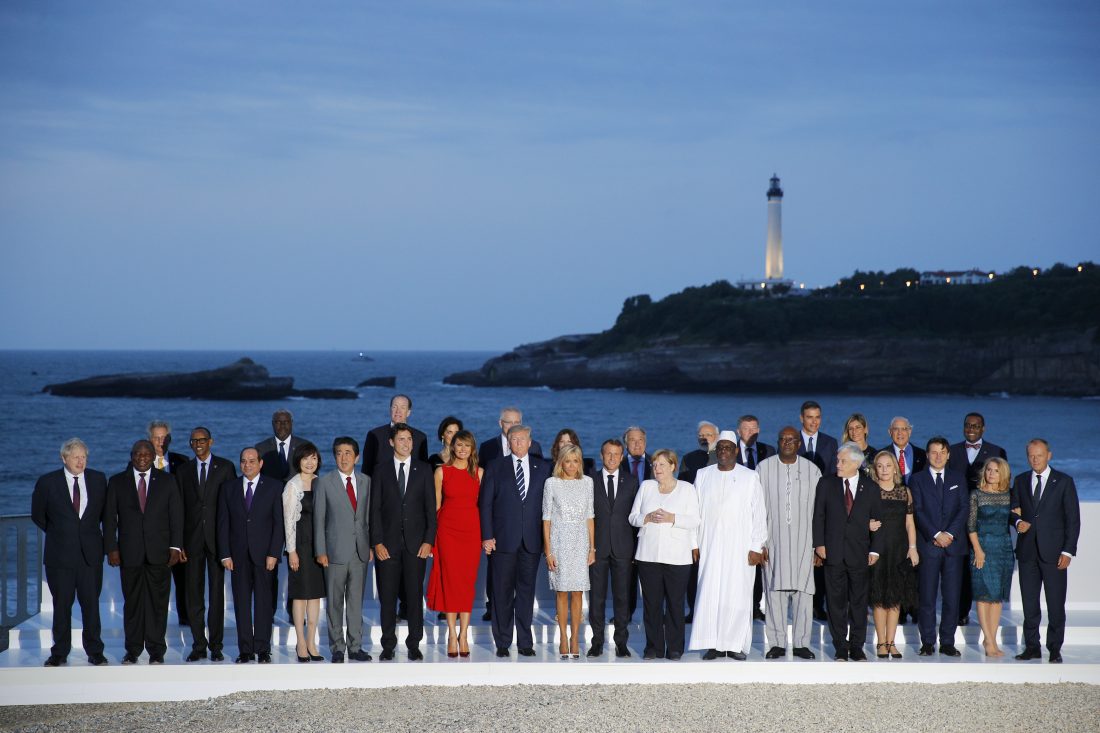 Group of Seven leader and guests pose for the G7 family photo Sunday, Aug. 25, 2019 in Biarritz. A top Iranian official paid an unannounced visit Sunday to the G-7 summit and headed straight to the buildings where leaders of the world's major democracies have been debating how to handle the country's nuclear ambitions. (AP Photo/Francois Mori)

BIARRITZ, France — Injecting fresh uncertainty at a time of global economic jitters, President Donald Trump sent mixed messages Sunday on the U.S.-China trade war as leaders at a global summit pushed the unpredictable American president to ease frictions over tariffs and cooperate on other geopolitical challenges.

Trump’s head-snapping comments at the Group of Seven summit about his escalating trade fight with China — first expressing regret, then amping up tariff threats — represented just the latest manifestation of the hazards of the president’s go-it-alone mantra. Allies fault his turbulent trade agenda for contributing to a global economic slowdown.

Despite Trump’s insistence that reports of U.S. tensions with allies are overblown, fissures between the U.S. and six of the world’s other advanced economies were apparent on trade policy, Russia and Iran as the leaders gathered at a picturesque French beach resort.

Two days after the U.S. and China traded a fresh round of retaliatory tariffs and Trump threatened to force U.S. businesses to cut ties with China, the president appeared to harbor qualms about the trade war, which has sent financial markets tumbling.

Asked during a meeting with British Prime Minister Boris Johnson if he had any second thoughts about escalating the trade conflict, Trump told reporters, “Yeah. For sure.”

He added, “I have second thoughts about everything.”

Hours later, the White House backpedaled. Press secretary Stephanie Grisham issued a statement saying the press had “greatly misinterpreted” Trump’s comments. She said the president only responded “in the affirmative – because he regrets not raising the tariffs higher.”

White House economic adviser Larry Kudlow, who was in the room when Trump spoke and was later interviewed by CBS’ “Face the Nation,” offered his own explanation.

Kudlow claimed Trump “didn’t quite hear the question” although reporters asked the president three times whether he had any second thoughts about ramping up the trade war and he responded three times.

At first, Trump’s admission appeared to mark a rare moment of self-reflection by the famously hardnosed leader. The subsequent explanation fits a pattern of Trump recoiling from statements he believes suggest weakness.

Earlier this month, Trump backed off on a threat to place even tougher tariffs on Chinese imports as aides fretted about their impact on the holiday shopping season and growing fears of a recession in the U.S.

Trump had hoped to use the summit to rally other leaders to do more to stimulate their economies, as fears rise of a potential slowdown in the U.S. before he stands for reelection in November 2020.

Johnson, for his part, praised Trump for America’s economic performance — but chided the U.S. leader for his unbending China policy.

“Just to register a faint sheep-like note of our view on the trade war,” he told Trump. “We’re in favor of trade peace.”

Trump said he had “no plans right now” to follow through on his threat of an emergency declaration, but he insisted he would be within his rights to use a 1977 law designed to target rogue regimes, terrorists and drug traffickers as the newest weapon in the clash between the world’s two largest economies

“If I want, I could declare a national emergency,” Trump said. He cited China’s theft of intellectual property and the large U.S. trade deficit with China, saying “in many ways that’s an emergency.”

For all of that, Trump disputed reports of friction with other G-7 leaders, saying he has been “treated beautifully” since he arrived.

The cracks started to emerge moments later after the French government said the leaders had agreed at a Saturday dinner that French President Emanuel Macron would deliver a message to Iran on behalf of the group.

Trump denied he had signed off on any such message.

“No, I haven’t discussed that,” he told reporters during a meeting with Japanese Prime Minister Shinzo Abe.

Administration officials said Trump was noncommittal when the leaders discussed the subject of a message to Iran during a conversation about Iran’s nuclear program.

For several months, Macron has assumed a lead role in trying to save the 2015 nuclear accord, which has been unraveling since Trump pulled the U.S. out of the agreement. The French went even further Sunday, inviting Iranian Foreign Minister Jawad Zarif to Biarritz in a bid to open talks meant on lowering tensions.

Trump curtly told reporters he had “no comment” on Zarif’s presence. Officials said the White House was not aware in advance of the invitation to Zarif — a further indication of Trump’s diminished role.

Trump also faced opposition from European leaders over his stated desire to find a way to re-admit Russia to the G-7 before next year’s meeting of the world leaders, which will be held in the United States. Russian President Vladimir Putin was expelled from the former G-7 in 2015 following Moscow’s invasion of Ukraine.

And, sitting feet away from Abe, Trump declined to forcefully condemn North Korea’s flouting of international sanctions with a recent burst of short-range ballistic missile tests, calling them “much more standard” missiles. Abe views them as a critical security threat.

Trump told reporters: “We’re in the world of missiles, folks, whether you like it or not.”