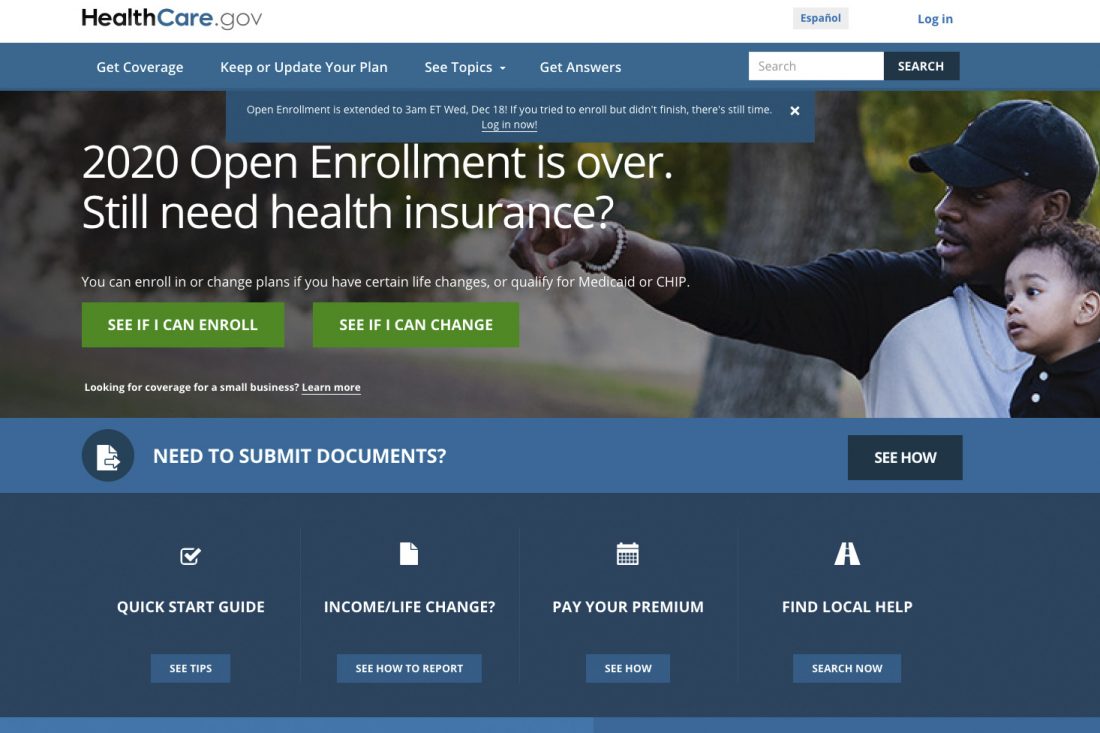 This screen grab from the website HealthCare.gov shows the extended deadline for signing up for health care coverage for 2020. The Trump administration says people will get more time to sign up for “Obamacare” health insurance following a spate of computer glitches over the weekend. The Centers for Medicare and Medicaid Services says the new HealthCare.gov deadline is 3 a.m. Eastern time on Wednesday, Dec. 18. (Centers for Medicare and Medicaid Services via AP)

WASHINGTON — The repeal of an unpopular fine for people without health insurance has had little impact on “Obamacare” sign-ups or premiums, a gap between the real world and legal arguments from conservatives again challenging the Affordable Care Act.

The 10-year-old law has proved more resilient than its creators or detractors imagined, even as the Supreme Court considers whether to take up the latest effort to roll it back.

Opponents argue that the constitutionality of the entire 900-page law hinges on the now-toothless penalty for not having health insurance. Collected as a tax by the IRS, the penalty was intended to enforce the law’s “individual mandate” that Americans be insured. A previous Republican-led Congress set the fines to $0, effective last year.

“We’ve gotten a lot of evidence by now about what the market looks like without a mandate penalty, and on the whole it looks pretty stable, which is surprising because that’s not what most people would have expected when the ACA was being written,” said Cynthia Cox, who directs research on the health law for the nonpartisan Kaiser Family Foundation.

A Kaiser study released this week found that removal of the penalty pushed premiums up about 5% going into 2019, but the bottom line was a wash because of other factors. Insurers appeared to be making healthy profits.

The penalty was thought to be critical when the law was being written in 2009-2010. The idea was to nudge healthy people to sign up, helping keep premiums in check. But Cox said there’s no indication that healthy people have dropped out in droves. In one telling statistic, the Kaiser study found that average hospital days per 1,000 people enrolled dipped slightly in 2019, even after the penalty was eliminated.

Partial sign-up numbers for 2020 released Wednesday by the government point to stability. Nearly 8.3 million people enrolled in the 38 states served by the federal HealthCare.gov website. That’s down only about 2% from last year, when one additional state was using HealthCare.gov. A final count including that state — Nevada — and others that run their own sign-up efforts is expected by the spring.

The insurance mandate was the central issue when the Supreme Court first upheld the health care law in 2012, over a year before HealthCare.gov opened for business.

Chief Justice John Roberts cast the key vote in that 5-4 decision. He found that Congress lacked constitutional authority to require that Americans have health insurance. But because Congress has broad powers to levy taxes, Roberts ruled that a tax on people who did not purchase coverage offered them was constitutional. That allowed the law to survive what’s still seen as its most serious legal challenge.

Kathleen Sebelius, health secretary for President Barack Obama, said in 2012 that it was generally accepted that the insurance mandate was part of a three-legged stool key to stable markets. The other two legs were taxpayer-provided subsidies for premiums and a guarantee that patients with preexisting medical conditions could no longer be turned down or charged more.